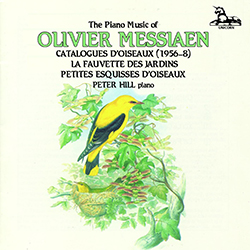 Of the music that’s been making a special impact on me in the last couple of months, i particularly want to flag up various albums of piano music. Peter Hill‘s renowned three-disc recording of Olivier Messiaen‘s epic cycle Catalogue d’Oiseaux has been reissued under license from Unicorn by Treasure Island Music. i honestly wonder whether this may be the most wholly immersive recording of piano music that i’ve ever heard. This is partly due to Messiaen’s intricately worked out sense of narrative, occupying an imaginary day listening to the birds around him, each movement focusing on a different creature. Extreme contrasts and shifts of character and attitude occur constantly throughout, Messiaen capturing the various behaviours and mannerisms of these birds in different contexts (Book 4, devoted to the Reed Warbler, being one of the most radical in its variety). But the depth of immersion comes just as much from Peter Hill’s staggeringly virtuosic and transparent performance (the recording quality is simply immaculate). Every note and chord is positioned and aligned with utmost precision yet, paradoxically, at the same time seems to be the product of raw improvisatory élan, as though the music were emerging from Messiaen’s mind in real time. In fact, even that’s a little wide of the mark, though: Messiaen managed to establish a soundworld in Catalogue d’Oiseaux that, to my mind, almost seems ‘un-composed’, as though Messiaen himself were barely relevant in the process of transcription from bird to music. One of the greatest piano masterpieces of the twentieth century, it’s excellent that Treasure Island Music has made this peerless, arguably definitive recording widely available again. 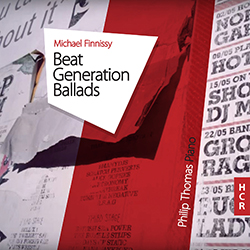 Another ambitious piano cycle, much more recent, that’s found its way onto disc with impressive speed is Michael Finnissy‘s Beat Generation Ballads, released on Huddersfield Uni’s very own HCR label. It’s a work i’ve waxed lyrical about twice before – after the world première at HCMF 2014 and in celebration of Finnissy’s 70th birthday – and Philip Thomas‘ marvellous new account on this recording clarifies things further. Yet, having said that, there are aspects to this work that remain (for me at least) somewhat tough to penetrate: the fourth movement, ‘Evans, Harry, Scott, hearts foolish’, is a case in point, its delicious, dreamy opening minute-and-a-half evolving into something abruptly dance-like towards the end. One’s used to such narrative leaps as these in Finnissy’s work, but navigating them can take time before they feel more deeply plausible (and eventually inevitable). However, second movement ‘naked original skin beneath our dreams & robes of thought’ now seems much more clear and coherent, Thomas performing it a whole minute quicker in this recording than at the première, significantly tightening the curious Romantic inclination running beneath its broken-up surface. The wondrous fifth movement, ‘Veränderungen’ still comes across, to quote my description on first hearing it, as “practically a cycle within a cycle”, a convoluted sequence of ‘alterations’ (as distinct from variations) in which Finnissy moulds and re-works earlier material with all the far-reaching contrapuntal convolution – sounding almost Baroque at times – and intimacy typical of Finnissy’s music. A thoughtful, fastidious rendition of a work brimming with complexity and immediacy, but above all, beauty. It’s paired here with Finnissy’s 2006 First Political Agenda, a three-movement piece that moves from a ferocious, stunningly violent opening (all the more so due to the brief chinks of light breaking through the mêlée) through a pensive middle panel in which notes feel not so much played as placed, carefully positioned after each other, a Beethoven quotation echoing and permeating the music, to an unsettlingly gentle, apparently unemotional but ultimately traumatic (traumatised?) conclusion, disquiet running throughout. A very different, much shorter work than Beat Generation Ballads, but in many respects, even more compellingly potent. 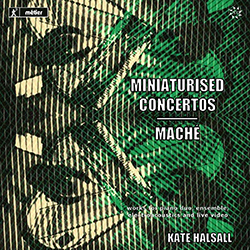 More mixed in its results is Miniaturised Concertos, a double album on the Metier label of piano-focused music performed and/or organised by pianist Kate Halsall. The first disc is not so much problematic as simply aloof: Andrew Poppy‘s rich minimalistic textures quickly grow tedious, plenty of gloss but nothing much beneath; Colin Riley‘s exploration of percussive sounds resonated by action from the piano has its moments but at twenty minutes is way overlong, made more engaging with some quite exciting textures that develop into an atmospheric soundworld with electronic shimmerings, but which remains a little too static. Even the normally reliable Naomi Pinnock and Philip Cashian barely convince: Pinnock’s convoluted, athletic moto perpetuo alternating with soft clicks leading to a fragmented, stilted ‘conversation’ is more curious than engaging (though its ascetic bloody-mindedness is undeniably admirable), whereas Cashian’s highly repetitive, cycling patterns are far more interesting than Poppy’s in their inexactitude and halting sense of momentum, but again, one’s left shrugging at their machinations. However, the second disc – under the title Maché, in which seventeen short pieces are turned into “multi-composer remixed ‘concertos'”, including indeterminate aspects – provides much richer music. Maché 2 and 3 share an arbitrariness that makes them frustrating and forgettable, but the other two are superb. Maché 1 (melding material by Duncan MacLeod, Simon Vincent, Joel Bell and Ryoko Akama) undergoes a lovely development from isolated pitches into a dense, complex electroacoustic soundworld, later emphasising electric guitar, finally becoming a kind of drone. Maché 4 (material by Richard Glover, Helen Papaioannou, Ruta Vitkauskaite, Rowland Sutherland, Andrew Morgan, Fumiko Miyachi and Devon Tipp) is truly outstanding: resonant chords, dissonant but attractively so, punctuated with hugely powerful and exciting sweeps across piano strings, leading to a pulse-driven episode of momentum and thence into a suspended ambient stasis, laden with spikes in its surging resonant conclusion. At less than five minutes long, it’s the shortest piece on both discs, yet by far the most successful and memorable. 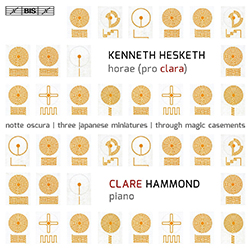 i first encountered Kenneth Hesketh‘s Horae at its world première at the 2013 Cheltenham Music Festival. Then, nestled alongside music by Szymanowski and Satie (the concert fitting titled ‘Greek Piano Odyssey’), Clare Hammond’s account of Hesketh’s twelve miniatures was dazzling. It was also my first encounter with Hammond’s playing, and the virtuosic intricacy of her performance genuinely took my breath away (this was before i had started writing about Cheltenham concerts; the review would have been positively incandescent). Now subtitled “(pro Clara)”, Horae is just as impressive in Hammond’s recording of it, released last year by BIS. In Greek mythology there are various groups of Horae, the goddesses responsible for aspects of time and the seasons; Hesketh’s inspiration is the most obscure set of twelve, governing the periods of the day: Auge, Anatolê, Mousikê, Gymnastikê, Nymphê, Mesembria, Sponde, Elete, Aktê, Hesperis, Dysis and Arktos. Hesketh’s piano writing fuses a contemporary mindset with a distinct romantic sensibility, such that, despite its forays into apparent opulence and/or impressionism, it always demands serious clarity from the pianist. This is one Hammond’s greatest skills: whether negotiating streams of overlapping liquid filigree or frantic, cascading chatter, the music consistently sounds as though cut by a laser, sometimes so brilliantly precise that it sounds almost eye-watering. On balance, Hesketh favours a mixture of introversion and close examination of material rather than more flashy displays of performance, and it’s in these miniatures – no shorter than the others, yet somehow ‘smaller’ – that Horae attains its greatest heights of expressive magnitude. The fifth movement, marked “like the splash and suspension of water droplets”, fully lives up to that description, occupied with an interesting interplay between torrential passages that swallow up everything and apparent zooms-in to scrutinise pristine individual pitches floating in space. The eleventh movement (“…lapping, with low sounds”) is wonderfully slow-burning despite only lasting three minutes, seemingly about to become imposing from its lugubrious beginnings but instead holding itself in check, with a fabulous sense of inner conviction/direction while remaining, somehow, unpredictable. Those who prefer their pianism with more outgoing velocity will find much to relish in some of the other movements, but for my money, it’s in these quieter, reflective spaces that Hesketh taps into something really magical as well as personal. The disc also includes three earlier works of Hesketh’s (from 2002 and 2008) that sit well alongside Horae. The piano transcription of Notte Oscura struggles to live up to the potency of its orchestral origins (as part of Hesketh’s opera The Overcoat), but Through Magic Casements and the Three Japanese Miniatures are strong pieces, the former in particular, displaying a kind of ‘sweaty’ demeanour, caught up in a swirling, feverish intensity that morphs into stroppy staccati before eventually mellowing out. Hesketh and Hammond are clearly a brilliantly-suited double act.