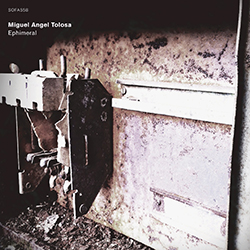 Ephimeral is a recent release of electronic music by Spanish composer and sound artist Miguel Angel Tolosa. Tolosa first got my attention in 2015 with Loner, his superb collaboration with Ingar Zach (which ended up on my Best Albums of 2015) and this disc has got me just as excited. That title, though i’m unsure whether the spelling is implying something specific, hints at the fact that half of the ten pieces on the disc are very short, barely clocking two minutes’ duration. Some are a bit too ephemeral for their own good, but this is due simply to the fact that what Tolosa is doing feels too interesting to be curtailed like this. ‘Musgo’ (Moss) and ‘Allá lejos’ (Far away) are cases in point, the former an intense, dense noise-based texture within which clear bands are detectable as well as different behavioural elements – some rumbly, some granular – with a clear sense of restraint shown in the lower frequencies, while the latter is characterised by a glitched, regular pulsing in the midst of a throbby floating texture. ‘Tropismos’ (Tropisms) and ‘Pálida y móvil, sombra’ (Light and mobile, shadow) are even shorter, together lasting less than three minutes, but they go even further in presenting assertive ideas that are instantly engaging. Keeping these four pieces as brief as this is clearly Tolosa’s point, so one must be content to relish and revisit their fleeting moments; in ‘Pálida y móvil, sombra’ (which lasts 72 seconds), Tolosa is even sufficiently courageous to allow a substantial portion of silence to intrude. There’s truly something marvellous and mysterious going on in these miniatures.

What makes their brevity uncomfortable is because Tolosa’s soundscapes feel instinctively meditative. They’re not really ‘ambient’ in the familiar sense of that word – they’re too consistently interesting for that – but their immersive qualities are considerable. This is music to bathe in. Thankfully, there are more in-depth pieces that demonstrate where Tolosa’s ideas can go and what they can be when given longer to speak. The album opener, ‘Rio Cristal’ (Crystal River) quickly develops into a quasi-static cluster of growing intensity; various pitches within become prominent as drones, teasing out implications of harmony (particularly an interesting minor/major third ambiguity). ‘Sol de plomo y purpura’ (Sun of lead and purple) goes further, beginning life with a field recording of rain and thunder. This recedes to reveal an attractive floating network of pitches, some fixed, others moving, colliding, coalescing, clustering, but all broadly consonant. This is where duration becomes so meaningful, establishing over seven minutes a concentrated focal point, like a gentle sonic laser beam upon and through which other paths of light glance and refract. Longer still is ‘Fragmentos de ti’ (Fragments of you), my favourite piece on the album. Tolosa sets up an intense throbbing and pulsating that, devoid of high frequencies, soon becomes more noise-based. Medium register sounds and pitches are introduced and removed like organ stops, and the piece displays a patient swelling and receding structure (never entirely disappearing) that, alongside the muted character of the music – suggesting hefty unidentifiable objects moving in a large, resonant space – brings to mind later works by The Hafler Trio. Nothing’s ever fixed, the music is constantly being revised or altered, ultimately receiving an injection of bass that causes it slowly to tilt out of view. Really wonderful stuff. Ephimeral is available on CD direct from SOFA and digitally from the usual places. 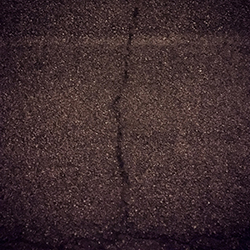 In some respects, Giulio Aldinucci & Francis M. Gri‘s new five-part collaboration Segmenti explores a parallel soundworld. Again, there’s a meditative depth of space (no short durations this time), though the emphasis here is on pitched rather than noise-based materials. Partly for this reason Segmenti approaches closer to the world of ambient music, Aldinucci and Gri creating beautiful large-form swatches of gossamer. There’s an interesting contrasting sense of perspective displayed in these pieces. ‘Anchor’ behaves in an aloof way, its droney texture, moving from a lower to a higher registral emphasis, is ostensibly light but sufficiently dense that it’s hard to know where or on what to focus. However, this is no bad thing, inviting a rapt listening focus that’s able to move freely through its wealth of details. Dronal elements recur elsewhere; in ‘Divisi’ the duo creates a fixed pitch centre that sounds distinctly sun-kissed, motes and particles of sound swirling around it, and which is twice subjected to impressive swells from within. It ultimately reduces to a cycling, drifting mass, very slowly subsiding in a transfixed process of slow dissolution. If noise features anywhere, it’s in the third track, ‘Magma’, where heavily reverbed piano notes are approached by a gritty cloud texture that coalesces around them. Gradually this becomes encrusted with content such that individual details becomes secondary to the by now seething accumulated mass. Though clearly much too intense to be described as peaceful, it nonetheless retains an idyllic quality due to never really becoming abrasive.

In their own way, each of these five pieces undergoes a unique form of slow-burn, and this is especially clear in the opening two pieces. ‘Remnants’, like ‘Anchor’, is initially vague and distant, though over time clarifies to form an exquisitely pretty sound object seemingly slowly turning in space. Around two-thirds of the way through, Gri and Aldinucci push it forward, revealing a number of texturally differentiated strata. ‘Faglie’ is arguably the album’s high point, a 14-minute shape-shifter that moves at an almost glacial pace, initially placing the gentlest of emphases on small harmonic shifts (including an ostensible, deeply buried perfect cadence). It sounds as though a melody is going to materialise, but instead, having bobbed around in the middleground for a time, the piece opens out into a warm ambient field with glimpses of a female voice singing somewhere deep within. Even more so than in ‘Divisi’, the music becomes entranced, entering a state of ecstasy, simultaneously delicate yet seemingly continuing to strengthen while it remains essentially static. Considering this is Aldinucci and Gri’s first collaboration, Segmenti is a magnificent achievement. It’s released on Gri’s own label Krysalisound, available on CD and digital from their Bandcamp site.