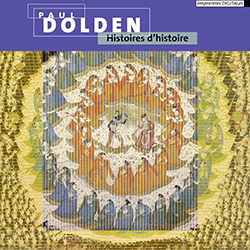 Nobody – but nobody – makes music that sounds like Paul Dolden. His work typically exhibits unchecked exuberance, both his instrumental and electronic (and electroacoustic) music not merely firing on all cylinders, but with their inner workings ludicrously pimped and their processors absurdly overclocked, sounds and timbres piled on top of each other in extremis. His latest disc, Histoires d’histoire, on the Canadian acousmatic label empreintes DIGITALes, is therefore interesting as in many respects it shows considerable restraint. Much of the disc is devoted to Dolden’s five-movement work Music of Another Present Era, completed last year, in which he sets out to create a kind of deliberately inauthentic ethnographic artefact. Dolden uses our lack of knowledge about the music of ancient cultures to construct a free-wheeling flight of fancy, employing a “metaphoric use of myths” as inspiration rather than seeking to fabricate a pointless (and impossible) ersatz ‘reconstruction’. This imagined historical survey perhaps accounts in part for the demonstrable delicacy shown in this piece. Yet even from the opening moments, it’s unequivocally Dolden: microtonally unique instruments – implying the lack of a coherent, codified tuning scheme – wheeze into life as though summoning up their energy only with considerable effort, presenting a unified but ‘doddery’ demeanour. This is how first movement ‘Marsyas’ Melodies’ begins (evoking the Phrygian Satyr who was supposedly the first to create music for the flute), eventually restarting in order to find some clarity, whereupon Dolden’s characteristic dense polyphony swells up, leading to Zappa-esque florid percussion and strangely agile stodge. Flutes are featured even more in third movement ‘Entr’acte’, in which a solid chorus of them is created, so compacted that they constantly clash and jostle and scrape against each other to the point where they can hardly move.

The ‘doddery’ demeanour i previously spoke of, the result of both density and microtonal confusion, continually rears its head, resembling the effect of amateur musicians struggling with both their instruments and their ideas (think of the Portsmouth Sinfonia, sight-reading), resulting in by turns amusing and charming acts of weird articulation that sound more than a little the worse for wear. As such – particularly in ‘The Cosmic Circle Dance’, one of the most exhilarating movements – there’s a joyous sense of music that needs several attempts from different directions or angles, crossed with a Harry Partch-like weird and wonderfulness that causes things to unexpectedly break off into a solo, or a twanging group of Jew’s harps. We speak of performers ‘playing’ their instruments, and a quality of play (in all its meanings) permeates every aspect of this disc, as it does with Dolden’s work in general. Yet while uproariously unhinged it may be, there’s an earnestness that keeps the music real, makes it more than just an extravagant piece of melodramatically theatrical nonsense. In a manner not dissimilar to Jennifer Walshe’s equally fictitious Aisteach project, one is caught up in the zeal and gusto that’s entirely genuine and leaves one wishing that these really were, in fact, the sounds from a long-forgotten age. 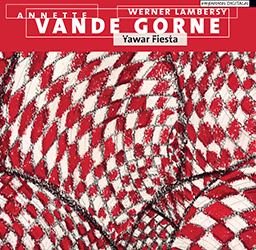 Also out on empreintes DIGITALes is Annette Vande Gorne‘s Yawar Fiesta, a work she describes as a ‘spatialised electroacoustic opera’. Released as a Blu-Ray audio disc, containing both surround and stereo mixes (including binaural), this 87-minute work – dedicated to one of the masters of acousmatic music, Francis Dhomond – is to all intents and purposes created entirely from vocal sounds. These have their origin in the libretto, written by Werner Lambersy, which “takes the incantatory and ritualistic form of an ancient Greek tragedy”. The text is used more as the basis for textural and/or spacial invention rather than for the strict and clear transmission of its content. Tangible words and vocalisations regularly emerge though, and perhaps the key defining feature of Yawar Fiesta is its dramatic, fantastical interplay of both material nature and perspective, alternating between granular, cloud-like, noisy formations (often positioned in the background or periphery) and solemn declarations and intoned chanting, seemingly by a vast, intimately close chorus of voices.

Considering the relatively small palette of sounds and sound treatments that occupy the piece, it’s remarkable that Gorne holds one’s attention so entirely for such a long period of time. Its structural unpredictability is an important factor, as is the enormous range of vocal types and arrangements, encompassing singing, chanting, speaking, shouting, crying (even keening), crooning, throat- and overtone-singing, whispering and whistling, ranging from just a single voice to many, moving like quicksilver between pitch and noise, speech and song, consonance and dissonance as well as shifting proximities and registers as though subject to the detailed rubrics of some vast, inscrutable liturgy. Another vital factor, though, is the extent of its emotional immediacy. Anything ‘operatic’ needs to keep its emotions at or very near to the surface, and while its intent and direction often feel bafflingly alien, the vitality and passion at its core is unambiguous to the point of being almost painfully overt. Unlike most large-scale works, it’s difficult if not impossible to talk about ‘highlights’ and single out particular sections or passages. The entire piece is a highlight, each and every one of its convoluted contours a spell-binding gem that becomes lost (but not forgotten) in an increasing collection of such jewel-like moments and episodes that follow each other in a way that’s almost implausibly organic. In lesser hands one would be marvelling simply at the breadth of imagination and astonishing compositional technique being demonstrated. Yet for all its unknowns and unpredictability, its wild paroxysms of austerity and elation, Yawar Fiesta cuts to the quick, and one is left gasping at the integrity and above all the intense humanity of its musical language. Everything in it is transparent and real and honest and true.