An interesting aspect of what i’ve been calling ‘steady statism‘ is the relationship it has with the idea of stasis. What is a musical stasis? Considering that music unfolds in time, isn’t it an oxymoronic idea? Furthermore, is such a hypothetical stasis intentional (objective) or perceptional (subjective) – or both? When writing about Markus Reuter’s Falling for Ascension, i remarked about one of the fundamental characteristics of steady statism: behavioural stasis, where the music changes over time but its underlying mode of operation – the compositional processes that lead to the musical material – remains essentially static, a system out of which musical outcomes emerge. More recently, i’ve been reflecting on the other kind, perceptional stases, where the emphasis is on extreme stillness of utterance, which may or may not be (or appear to be) the product of a behavioural stasis. 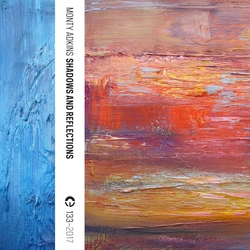 A striking example of this can be heard on Monty Adkins‘ Shadows and Reflections, released a couple of months ago on the Crónica label. This album was one i’d been anticipating for a while; Adkins spoke about it briefly during the Dialogue we recorded together in the spring, explaining how it was inspired in part by the process of painter Gerhard Richter:

…it’s the way in which he chooses certain types of colours on his squeegee, and then draws them very slowly down the canvas. So one of the things i’ve been working on recently is how you could actually compose very short fragments of material and then slow them down, and then, as he does, layer them on top of one another. So i’ve just finished a long, 40-minute piece, and that piece is made up of six three-minute pieces, and what I did was slow those pieces down, just as Richter would take very specific parts of the paint, and then slowly draw those across and add extra layers on the canvas. So that piece was drawn out of the technique of his paintings. [… It has] no gesture in it at all, which is quite unusual for me […] it does go somewhere but it’s pushing that to the absolute extreme: out of forty minutes, the main thing happens at thirty-two minutes. And I find, [when] you get to that point, there’s almost a sense of ecstasy.

This latter aspect is a familiar Adkins trope, one i’ve remarked upon numerous times previously, where the timing of a gesture or sound is not merely pivotal but transformative, making one reappraise much if not all that went before. But my anticipation for Shadows and Reflections was particularly piqued by the idea of it being essentially bereft of gesture, suggesting an altogether more ‘flat’ sonic journey.

That suggestion is emphatically borne out in the work’s two 20-minute movements, which are easily Adkins’ most perceptionally static pieces to date. Beyond this, they also mark the furthest point away from his acousmatic beginnings, focusing on just a single timbre – the organ in Phipps Hall at Huddersfield University – which is tightly-woven into a musical fabric that’s ostensibly dense but suffused with differing levels of light. The importance of light is indicated too in the album’s complementary artwork, which features details from two paintings by landscape artist Andy Fullalove, ‘Sounds of the Shadow‘ (blues) and ‘Sounds of the Sun‘ (reds). Adkins has mirrored these titles in the work’s two movements, while a different painting of Fullalove’s – featuring a network of crosses suspended in a kaleidoscopic colour-space – bestowed on the piece its overall title Shadows and Reflections. Light is paramount. 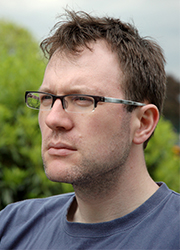 To call it ‘static’ is not an overstatement, and whereas Adkins’ music has often had the epithet ‘ambient’ applied to it (often, indeed, by me), it has never been more appropriate than here. It displays those wondrous paradoxes endemic to ambient’s unique demeanour: aloof warmth, passive engagement, disinterested serenity. The perceptional stasis it establishes is not unlike the experience of staring at a mountain, or a landscape of fields, during the night and day respectively, as the play of moon- and sunlight, occasionally deflected by clouds, passes across its surface, causing tiny shifts in the details of its complexion.

Though both movements are dronal, Sounds of the Shadow is the more steady, fundamentally exploring minute shifts in harmonic emphasis, always in relation to an omnipresent deep drone, a low F♯. This unwavering drone becomes the root of a harmonically stable stasis in which, like a glacial passacaglia over a ground bass with just a single note, Adkins echoes the practice of pulling out organ stops by teasing out certain pitches and overtones to tilt and rebalance the music’s tonal implications, giving the delicate impression of chord progressions. Especially lovely is a series of small higher register surges that occur from around four minutes in that result in an exquisite penumbral balancing act.

That these movements are primarily perceptional and not behavioural stases is more clear in Sounds of the Sun. The drone here, despite being no less omnipresent, is mobile, although one’s ability to identify the points where it – or, indeed, anything else – moves is almost impossible (skipping through the track at, say, 30-second intervals is genuinely eye-opening, revealing just how much is imperceptibly going on). The paradigm for this movement is established in the first few minutes: tonally more complex – its opening chord is a tight diatonic cluster – with a roaming harmonic sense. The word almost seems ludicrous in such a context, but the piece literally modulates: its shifting tonal centre is gently recoloured via inversions, and there’s a distinct long-term understanding that emerges of how we have infinitesimally been harmonically relocated. Despite employing just the sound of the organ, for the first half of Sounds of the Sun it’s curiously easy to forget that this is what we’re hearing, a side-effect (and, i think, a healthy one) of being drawn into its contemplative static space and focusing less on surface details. At certain points, though, Adkins exerts more obvious involvement, and these are the only moments when the perceptional stasis is noticeably disturbed by activity. A rich sequence of swells around thirteen minutes in is the most arresting example of this – gorgeous for its own sake as well as in its continual clarifying and blurring of the harmony – yet even this doesn’t cause enough ripples to worry the weight that keeps the music almost anchored in place.

For all its supposed lack of detail – “no gesture in it at all” – i’ve found myself returning to these two pieces again and again and again in recent weeks, and every single time hearing them entirely differently, finding new details, reappraising their trajectories (if that’s the right word for such crawling material). Sometimes it’s been the entire focus of my world for 40 minutes, sometimes it’s been there with me while i’m doing other things; as with the very best and truest ambient music, it works either way, fluctuating freely in its engagement with me and mine with it. That being said, it’s very hard to ignore such utterly mesmerising music.

Shadows and Reflections is available direct from Crónica as a limited edition cassette and digital download.

[…] new review of Shadows and Reflections is now on the 5:4 website here. It’s a really great review that really gets to grips with the tectonic layers slowly […]