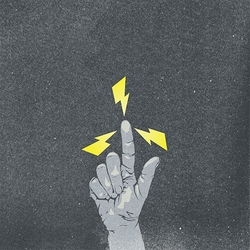 There’s so much i could write about in this series looking at free internet music, that i think it’ll be something i’ll have to return to regularly from now on. For the time being, though, i’m ending this series with an album that’s one of the most imaginative and effective reworkings of existing material that i’ve ever heard. It’s by Irish musician Dunk Murphy of whom, it must be said, i’ve seriously wondered over the last few years if he can do no wrong. He’s the creative force behind the project Sunken Foal, whose three Friday Syndrome volumes (released in 2012, 2013 and 2015) are all absolutely stunning demonstrations of his unique experimental approach to blending acoustic and electronic sounds into something that, stylistically speaking, is very hard to describe, but if we were to call it electronica then that wouldn’t be entirely untruthful.

In between volumes 2 and 3, in 2014 came Press Charges, which appears to be a one-off project, but on its strengths one hopes it’s something Dunk Murphy will return to in the future. Murphy has taken a dozen songs by Smokey Robinson – either more recent solo tracks or older numbers recorded with The Miracles – and used just the vocal line, around which he has created an entirely new musical context. It’s worth stressing that knowledge of the originals is not in any way vital to enjoying this album in its own right; far from it, as one would expect from Murphy they’re a sublimely enjoyable collection of punchy, soul-infused tracks that strike a perfect balance between the edginess of their beat and bass patterns with the overtly lyrical streaks running throughout each song. However, spending time with the originals goes a long way to highlighting just how ingenious are Murphy’s reworkings, which in every case bears almost no resemblance to the original arrangement, yet manage to stay utterly true to the song’s underlying lyrical tone.

Take ‘I Did You Wrong’ (each of Murphy’s track titles is drawn from or inspired by the song’s lyrics), where the laid-back character of the original – ‘Ooo Baby Baby’ (1965) – not entirely consonant with the lyrics’ ostensibly desperate admission of guilt, is turned into a shuffling minor-key track with pounding beats and an air of reverberant radiance surrounding the vocal part that lends the words a more affecting and authentic quality. Murphy comes at it from a different direction in ‘Really Really Real’, where Robinson’s appropriately light upbeat ballad is turned into a gentle funk number that, in the way the harmony moves, creates a gentle jarring against the vocal line that teases out the tensions implied in the lyrics (concerned with ignoring warnings from friends and relations about the “heartbreak reputation” of the girl he loves). It’s not remotely heavy-handed, such that it’s possible to ignore the words entirely and simply relish the careful way the song’s structure unfolds, but taken in its entirety, the effect is superbly subtle.

Other highlights include ‘Inch by Inch’, a complete transformation of Robinson’s 1979 hit ‘Cruisin”, turning it from another mellow soul number into a song with a convoluted rhythmic underlay, slow and fast at the same time, ideal for the lyrics’ combined references to driving and love-making. This is used to create the gradual sense of the song growing and expanding while – another paradox – appearing to remain entirely static, due to its harmony not going anywhere, for the most part just oscillating back and forth. The effect is utterly mesmeric, especially in the final couple of minutes where Murphy ramps everything up to attain a level of euphoria that’s truly exhilarating. ‘Teenage Craze’ is a more subtle reworking, taking the up-tempo soul song ‘Mickey’s Monkey’ (1963) and shifting forward 50 years (with an irresistibly restless bassline), while ‘Be A Man’ takes The Miracles’ first big hit ‘Shop Around’ (1960) and beautifully reworks it, keeping the harmony static for the verses (in a similar way to ‘Inch by Inch’) but moving it at the bridge sections in an unsettlingly forthright way that makes you wonder both where it’s going and whether it’s going to end up ripping the song apart.

But the most stunning tracks are ‘Jonesing’ and ‘The Permanent One’, both of which are yet more refined demonstrations of Murphy’s response to the lyrics. For ‘Jonesing’, based on one of Robinson’s more well-known later songs, ‘Just To See Her’ (1987), the lyrics are concerned with a reverie about a loved one, now lost. Robinson avoided any hint of negativity in the original song – which is about as light and fluffy as you’d expect from an ’80s soft pop ballad – and Murphy does the same, keeping the emphasis on elation rather than pining. But way more than this, he recreates the song as something remarkably new, almost entirely un-song-like: a strangely pulsating object, one that has no resting place either in terms of rhythm or harmony or indeed structure, with no sense of beginning or end, just an endless cycling of intense, increasingly radiant, ecstatic absorption. It could hardly be more perfect. ‘The Permanent One’ takes ‘Tracks of my Tears’ (1965), a song that movingly expresses the overwhelming sadness felt by someone who outwardly is regarded as “the life of the party” yet in fact, “Deep inside I’m blue / So take a good look at my face / You’ll see my smile looks out of place”. The Miracles’ version is a typically easygoing soul number, in a major key; Murphy’s rendition turns it into a melancholic slice of electropop, all brooding minor harmonies (with just a hint of emo) and skittish rhythmic contortions. Fittingly, it gives a strong impression that its superficial liveliness is just that, superficial, masking something more troubling beneath.

i know, i know, it’s probably blasphemous in some quarters to claim that what Dunk Murphy has done here has ‘improved’ Smokey Robinson and the Miracles’ original songs, so let’s suffice it to say that with Press Charges he has radically updated and reinvented them for a new generation, making them sound unbelievably fresh. Also available on vinyl, the album has been released as a free digital download from the Countersunk label’s Bandcamp site, and while you’re there be sure to check out everything else Murphy has released, as pretty much all of it is brilliant.

Below, for the sake of compare and contrast, is a link to each of the original twelve songs.

This is indeed gorgeous, a whole new way of hearing what I grew up with! Thank you.