Alongside the individual pieces i’m focusing on in this Lent Series, i’m also going to be providing an overview of as much as possible of Rebecca Saunders’ music that has been released commercially. When i started planning this series of articles last autumn, my perception was that there wasn’t very much of her music available, but investigating more thoroughly has revealed that around half of her compositions to date – 28 pieces – have been released on CD and/or digital formats, though in some cases the recordings are a little tricky to track down. i’m going to start by looking at three pieces that make for an interesting comparison with the pair of works i’ve explored so far. 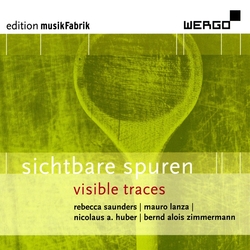 Composed in 2006, a visible trace – a 19-minute work enigmatically described as being “for 11 soloists and conductor” – predates both traces and murmurs, and is the first explicit use of a term like this in the titles of her compositions. In this respect, a visible trace is something of a turning point in Saunders’ output as a whole. Prior to this, the emphasis in her titles was on colour, with almost every piece composed between 1994 (the under-side of green) and 2005 (rubricare) bearing a name that implicitly or explicitly evokes either a colour or the act of colouration. With a visible trace, Saunders’ music becomes monochrome, occupying a remarkably vibrant palette of shadow and light, often at the extremes of both.

One can hear various similarities in this piece to both traces and murmurs. At the start, the players are clustered around the pitch B, though whereas in traces this clustering was single-minded, like a laser beam, in a visible trace there’s a more roaming focus of attention; it still feels like a point of stability in the work’s opening minutes, but it’s mobile. However, its role within the piece is fascinating because, in no time at all, the players start to lose sight of this stability. Violent accents ensue (the word ‘violent’ feels inadequate for how forceful these accents are), enormous thrusting blows answered or simply followed by trills or, on one occasion, an apparent blast of expelled air. It’s interesting to hear this in light of one of the quotations with which Saunders precedes the score, from Italo Calvino: “The word connects the visible trace with the invisible thing, the absent thing, the thing that is desired or feared, like a frail emergency bridge flung over an abyss.” There’s a strong sense in which the piece moves from the ‘frail’ idea of definition-of-a-thing at the start to the more nebulous, fearful, thing-being-defined afterward, a process that triggers enormous turbulence and terror. Those accents become so ferocious they’re like nails being driven into our flesh, and the music loses its grip on both rhythmic and pitched cohesion, becoming pulseless – the players drifting and coalescing as if by an attractive force into enormous moments of crisis, upon which they’re blown apart again – and pitchless, the notes either so high or dull as to be beyond recognition as anything other than some kind of oblique impact.

Despite the bleakness of this trajectory, there are achingly poignant moments of beauty, particularly as the work reaches its conclusion: a weird multiphonic chord that becomes reduced to slender strands of pitch in an ominous space, followed a couple of minutes later with something akin to random organ pipes sounding, their notes sliding around forming strange agglomerations coloured with soft guitar harmonics. It’s like an extended, plangent epilogue, an essay in quiet whimpering where the music – and indeed the performers – seem entirely disoriented. The closing moments, during which there’s a similar clustering around certain pitches similar to the start, seems less a recapitulation than a hallucination.

a visible trace is available in a recording on the Wergo label by Ensemble Musikfabrik on a disc titled Sichtbare Spuren (Visible Traces). It’s an astonishing performance, Saunders’ music making one of new music’s more dauntless ensembles sound positively deranged by fear. 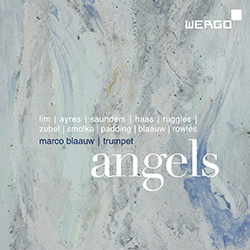 Neither, a work for double-bell trumpet duo, was composed in 2011 when Saunders revisited the then latest iteration of her earliest spatialised collage work, chroma (originally composed in 2003, and to date performed in no fewer than 20 unique versions). chroma XII was created for a performance by Ensemble Musikfabrik at Hanover’s Herrenhausen Gallery and Gardens in 2010, and Saunders took material for double-bell trumpet duo used in that piece and extensively reworked it: “I wanted to set the duo free from the large-scale collage, to frame it in silence … strengthening the lyrical line, slightly expanding the timbral palette, weighing carefully the moments of silence between the gestures.”

Composed for the same duo who had performed in chroma XII, Marco Blaauw and Markus Schwind, Neither is a piece i’ve written about before, when i reviewed Blaauw’s album angels a few years ago. Then, i described the music as “barely recognisable as being played by brass at all, buzzing, jarring otherworldly sounds emanating, as ever, out of dark, distant depths”. On the one hand, that’s arguably too brief a remark to be useful, yet it captures the essence of the piece. Throughout its ten-minute duration, the two trumpeters sound as though they’re lost in the bowels of a deep and complex industrial tunnel system, their sounds emerging via reflections and reverberation. Saunders doesn’t explicitly talk about ‘traces’ in the context of this piece, though there’s something of the same principle at play as in murmurs, ideas articulated at a distance so that what we perceive is a mixture of authenticity, interpretation and imagination. Put simply, details are essentially absent, yet this only makes the intensity of the performance – particularly the instances where the material flares up – overwhelmingly lyrical and very beautiful indeed, a melody as if from another world. 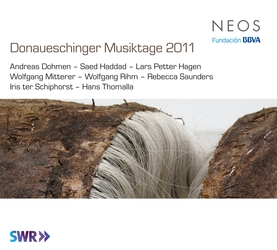 With a duration of three quarters of an hour, Stasis (2011) is one of Rebecca Saunders’ largest works (only insideout, at 100 minutes, is longer), and like chroma and murmurs she describes it too as a collage in which an assortment of chamber groups, this time comprising 16 players, are positioned around the space, each performing a discrete modular portion of material with its own particular gestural and timbral palette. This suggests a close similarity to murmurs, and Stasis does indeed operate in a similar way, the modules coexisting within the same environment, again operating according to a kind of behavioural ‘steady state’, which Saunders describes as “unchanging, ongoing, with an exhausting insistence, always, in essence, the same”. Yet there are several ways in which Stasis is markedly different from murmurs.

First, that word ‘exhausting’ is in no way hyperbole: Stasis is somewhat exhausting to listen to, which could never be said of murmurs. This is to a large extent due to that other word, ‘insistence’; while murmurs was the product of a distinct strategy to elicit a certain response, its protagonists were subtle, gentle, ephemeral, even – and i say this from an ‘ambient’ perspective – ignorable. In Stasis they’re anything but, projecting their ideas with loud ebullience and determination – swelling, throbbing, howling, crashing – maintaining a prevailing tone that’s fraught and fretful. Second, and this only reinforces that tone, though the players are dispersed there’s a sense that the environment they’re inhabiting – in contrast to the boundlessness of murmurs – is smaller, that its limits aren’t merely defined but can practically be seen. If murmurs occupies an ocean, Stasis plays out within a goldfish bowl. Third, the relationship between the chamber group modules, though still subject to the kind of liminal relationship definitions of murmurs, is altogether more cohesive. There’s a constant sense that all the groups are united by a common cause, that they are, in fact, a genuine community, acting if not always in harmony with one another, then at least in sympathy.

Though exhausting, Stasis is by no means relentless, and in fact some of the most memorable parts of the performance are when the music explores more subdued territory. One key example involves the bass drum, which has a recurring idea of low thuds, the first appearance of which is pivotal within a vivid, seemingly ‘electrified’ atmosphere. A stream of soft vocalisations through the flute is another of the work’s fascinating gentler ideas, suggesting as if it were actively trying to form words, trying to speak. And then there are the periods when strange chords materialise from nothing, when the music drifts and hovers, all momentum suspended, when drawn-out pitches collide and shimmer against each other. Echoes of murmurs, no doubt, but set within a very different context and thereby functioning and being perceived entirely differently. In comparison to some, perhaps a lot, of Saunders’ work, Stasis is a tougher, more gruelling experience, but within her output as a whole there’s something quintessential about its particular mixture of monochromaticism, behavioural stases, gestural ideas, complex relationships – both in terms of between the players as well as between the musical ideas and the audience – and quantities of detail. It’s arguably the most detailed work of Saunders’ that i’ve yet encountered, which in turn makes each listening experience yield many more previously unappreciated facets and intricacies. A work that keeps on giving, hard.

Stasis – in yet another performance by the indefatigable Ensemble Musikfabrik – is featured on the Donaueschinger Musiktage 2011 box set released by NEOS, physical copies of which are now almost impossible to find, but which is also available digitally.