Continuing my survey of recordings of Rebecca Saunders‘ music, i’m looking today at a cluster of pieces featured on compilations as well as a couple of standalone releases. The last work i wrote about, still, initially bore the provisional title rage, and while Saunders ultimately pulled back from this in favour of something more ostensibly benign, on two other occasions she has given works a similar title: fury. The earlier of the two, for double bass solo, dates from 2005. Saunders clearly has a certain fondness and/or fascination with the double bass, which has been used prominently in many of the works i’ve discussed so far in this Lent series, often making a defining contribution to their respective soundworlds. 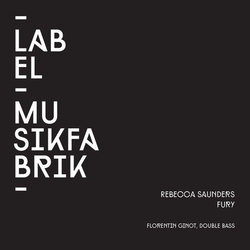 What makes fury distinctive is the level of focused ferocity that the instrument demonstrates, articulated via the familiar palette of very low (detuned) grindings, vicious slashes and swipes, brutal percussive clatter and pitch-clash judderings – the latter one of the work’s primary gestures – often for extended periods, thereby occupying the majority of the work’s 8-minute duration (drawing comparisons with the hermetically-sealed violence of Saunders’ double bass duo, Blue and Gray). But the concept of fury – both musical and actual – is what it is due to cause and context, and for its intensity to speak needs contrast. We get hints and slivers of this: in a not dissimilar way to the melodic yearning of the solo violin in still, the double bass in fury also exhibits some kind of instinct towards melody. It’s nothing remotely like a yearning, but whatever it is, it’s a window into something more than the traumatised rage that dominates elsewhere, heard almost exclusively in higher register moments. These moments are desperately ephemeral, but it’s their very ephemerality – offering the briefest of insights into something ‘other’ – that makes the violence boiling around them sound so much more fearsome.

fury was released as a single on Ensemble Musikfabrik’s digital label a couple of years ago, in an intimidatingly direct performance by Florentin Ginot. 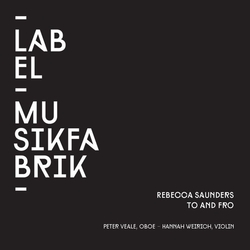 to and fro for violin and oboe was composed five years later, in 2010, and is a much more austere, behaviourally fixed work. While it doesn’t display the same sort of ‘steady state’ as Saunders’ collage works, the articulative and expressive range of the work feels severely restricted. One of the curious effects of this is that, despite being longer (around 10 minutes’ duration), it actually feels shorter than fury; there’s something tiny about it, something diminished. One way into the work is to consider the following quotation from Samuel Beckett’s poem Neither that precedes the score:

On the one hand, the oboe and violin are distinct musical entities in their own right; on the other hand, they’re so closely bound to one another as to feel inextricably intertwined. The oboe’s first entrance is an imperceptible materialising within the violin’s opening sequence of timbral alterations on a variety of sustained pitches, and thereafter the two often appear to be twin facets of the same sonic device, impossible to divide or prise apart. Elsewhere, they split to articulate to and fro‘s two main ideas, which are opposites: a sustained line and a tremolo. As the two instruments repeatedly tangle around each other, there’s something of Beckett’s impenetrability in the whys and wherefores of their actions, which are simple yet incomprehensible, straightforward but remote. It’s one of Saunders’ stranger works, keeping us at a distance yet constantly beguiling.

to and fro is available as another of the singles released by Ensemble Musikfabrik, performed by Peter Veale and Hannah Weirich. 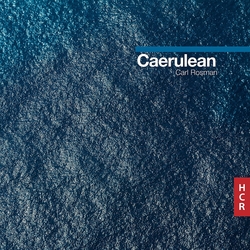 Still more strange and impenetrable is Caerulean for solo bass clarinet, completed in 2011. The work revolves around Saunders’ evident fascination with various unconventional forms of multiphonic and trill, which form the basis for most of the material. There’s a lovely fragility to them, and in the work’s more restrained episodes the clarinet’s permanent state of flux – in terms of both pitch and timbre – is beautiful and faintly elegiac. But Saunders is also interested in the effect of taking these precarious sound formations and pushing them way beyond what they can withstand, resulting in outbursts of staggering ugliness. There’s something wilful about her determination to pursue this line of enquiry so forcefully and at such length (the work lasts 19 minutes), and as such it’s by far one of her most forbidding – and, dare i say it, unrewarding – compositions. Yet Caerulean certainly testifies to Saunders’ dauntless pursuit of unusual sounds and combinations of sounds, and her willingness to experiment and explore wherever her instincts take her.

Caerulean is available on Carl Rosman’s disc of the same name, released a couple of years ago by Huddersfield Contemporary Records; as one would expect, Rosman delivers both ends of Saunders’ extremely polarised spectrum with complete transparency, in a performance that’s by turns tender and ruthless. 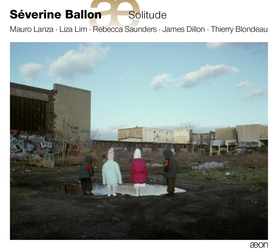 Solitude for solo cello is a work i wrote about back in 2013, following its world première at the Huddersfield Contemporary Music Festival by Séverine Ballon. i was struck then by the occasional weak incursions of something lyrical into the work’s prevailing instability, and being able to spend time with Ballon’s recording of the piece has reinforced that impression. Saunders’ prefatory note, as in many of her works, is an aloof reflection on the meaning, etymology and connotations of the work’s title:

A state or quality of being along, solitary or remote. Implies the absence of all others: inaccessibility, withdrawal, seclusion, isolation. A state of separation. A lonely or secluded place: wilderness, waste, desert, emptiness, wasteland. In silence, vacuous and devoid.

It seems to me that many of Saunders’ notes are provocative, both towards herself – acting as a challenge and a spur to composition – and towards us, due to the extent to which these brief asides can misdirect our expectations. In shifting from ‘impenetrability’ (to and fro) to ‘inaccessibility’, Saunders has nonetheless created a work that’s almost painfully open, in which the references to vacuity and emptiness find expression in a musical reality fully-charged with enormous quantities of energy. The cello/cellist may well be isolated and separate, but its internal monologue, as presented in Solitude, is desperate, unstable, in extremis. The bottom string of the instrument is typically detuned – by a full octave! – enabling the instrument to roam in the most abyssal depths, but this expanded range – as in much of her work – is most telling when put to melodic ends. Few composers have reinvented the notion of melody more comprehensively than Rebecca Saunders, and the way the cello ‘sings’ in this piece is as unfamiliar as it is uncanny, all the more so when pitted against some of the most eye-wateringly savage percussive blows, slaps and cracks to appear in any of her music. It’s hard not to hear these as examples of self harm, particularly in light of her inclusion of the word ‘cenobite’ in her text: this may well not be a deliberate allusion to Clive Barker’s reinvention of this word (could Solitude be the hellbound musical manifestation of opening the Lament Configuration?), but it certainly lends extra significance to the air of self-inflicted cruelty playing out in the piece.

Similar to to and fro, though, it’s the lyrical elements of Solitude, rather than the violence, that speak loudest. Unlike Saunders’ treatment of double basses, the cello pretty much never growls but instead it groans, occasionally seeking to sing by unleashing florid flares of harmonics as a kind of aspiration to transcendence. Even when the tumult becomes unstoppable Saunders peppers the carnage with further fragments of melody, resulting in something akin to demented birdsong. It’s perhaps stretching a point to hear this as triumphant, but it’s certainly heroic. There’s one other thing i love about Solitude, and it’s the way that, due to the fluxing nature of its articulations, fingerings and bowings, it’s often extremely hard to locate exactly which register the music is presently occupying. This aural illusion is just one of the ways that Saunders makes everything in the piece fundamentally unstable and tremulous, a constant battle to maintain coherence and avoid being reduced to a spasming wreck. The ending is one of the most enigmatic in her entire oeuvre: still wrangling in its lowest depths, has anything been achieved? or was it all simply expressing rather than attempting something? Whether or not the wonderfully weird, strangled final chord provides an answer is debatable, but it’s clear that whatever happened in Solitude, it was both urgent and necessary.

Séverine Ballon’s wonderful recording of this gruelling piece is the highlight of her compilation Solitude, released by Aeon in 2015, which also includes works by James Dillon and Liza Lim.

For the sake of completeness, a related work to Solitude, Saunder’s string quartet Fletch, is also available in an excellent recording by the Arditti Quartet. i’ll say no more about the work on this occasion as i’ve written about it twice before, in an assessment of that disc and a review of the Arditti’s performance of the work at HCMF 2012. 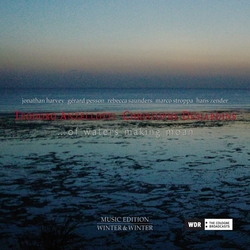 In my writing about Rebecca Saunders’ music i’ve often referred to instruments and/or their players as protagonists in a broader dramatic space, but in the case of … of waters making moan, a work for solo accordion composed in 2013, such metaphors are insufficient. Not because the work is undramatic – quite the opposite – but because the accordion’s capacity has been expanded such that it’s not merely a part of the dramatis personae but a personification of the entire drama. It’s no hyperbole or exaggeration to say that there’s something operatic about the piece: it prepares dramatic spaces and contexts, creates them, and then inhabits and performs within them. There’s no narrative of course, no story, but there are unequivocal dramatic arcs and shapes, interspersed with periods of repose and even outbreaks into music that seems positively balletic.

There may be no story, but the work is partly inspired by a poem of James Joyce, which also provided its title (and, considering the final line, possibly also the title of the solo double bass piece):

All day I hear the noise of waters
Making moan,
Sad as the sea-bird is when, going
Forth alone,
He hears the winds cry to the water’s
Monotone.

The grey winds, the cold winds are blowing
Where I go,
I hear the noise of many waters
Far below.
All day, all night, I hear them flowing
To and fro

As one would expect from Saunders, though, the piece is also about the potentialities of the instrument itself, focusing here on a particular gesture summarised as “the opening and closing of the bellows, drawing out a thread of sound from beneath the surface of silence; fragments, breaths, continuous, neverending, surfacing and disappearing”. The range of sounds she coaxes from the accordion is extraordinary: huge, pent-up clusters that often sound electronic; loud expulsions of air; shivering rattles and surging crashes; soft, beating undulations; wild, almost flamboyant, rhythmic dances; and remote melodic and harmonic ruminations – the last of which comprises some of Saunders’ most delicately introspective music. At over 20 minutes’ duration, … of waters making moan ranks (alongside Caerulean and the 2005 piano work crimson) among her most large-scale solo works, and to my mind is by far the most dramatically all-encompassing of them.

… of waters making moan is available on a compilation of the same name (interesting how Saunders’ music invariably provides the title of these albums) by accordionist Teodora Anzelloti – for whom the work was written, and who gives it an entirely immersive performance – and violist Christophe Desjardins, released on Winter and Winter in 2016.

[…] inward performance here by cellist Andreas Lindenbaum (lasting a full two minutes longer than Séverine Ballon’s 2015 recording). That being said, the idea that the instrument is not, as first impressions suggest, tentative but […]