What has been will be again,
what has been done will be done again;
there is nothing new under the sun.

Whether or not you agree with these words – penned by the sombre but often startlingly wise author of the biblical book of Ecclesiastes – it’s impossible not to consider them when listening to the most recent pair of world premières at the 2018 Proms, written by US composer Caroline Shaw. Her music was new to me, and as a warm up for her two new ‘Essays’, i spent some time with her First Essay: Nimrod, composed a few years ago. In hindsight, it’s by far the best of the three, exhibiting a similar kind of playfulness to that of early Tippett, at all times taking its rhythmic and harmonic ideas from existing tropes and models but which, with the exception of a dull passage in the middle, generally avoids sounding too conventional in the way they’re used. The same can’t be said for Second Essay: Echo and Third Essay: Ruby, which received their first performances at Cadogan Hall on Monday by the Calidore String Quartet. 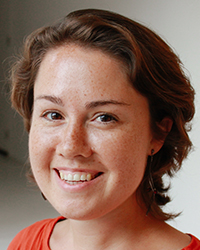 Taken together, the three pieces form a kind of triptych, inasmuch as the central panel in this configuration, Second Essay: Echo, opts for an ever-so-slightly more experimental approach to the treatment of its material. Shaw begins and ends by presenting chords that emerge from the spluttering croaks and scrapes of overpressured strings, gradually pumping more energy into them until they sound robust. Quite an interesting way to set things in motion, though thereafter we have what amounts to little more than a simple exercise – a much better word for these pieces than ‘Essay’ – in reheating and reworking ideas begged, borrowed and stolen from an assortment of existing 19th century models.

There’s a distinct ‘noodling’ quality to both these pieces, as though Shaw was moving from one idea to another almost at random, then joining them up after. There’s a certain logic to the way each piece progresses, though to call it a coherent sense of direction or purpose would be overdoing it. Each time i’ve listened to these pieces i simply cannot fathom what it is they’re trying to do or be, beyond stringing together some received notions of ‘romanticism’ – replete, in Third Essay: Ruby, with a full-on pseudo-‘appassionato’ climax – into something that can just about lay claim to being original due to being a bit lopsided here and a bit scratchy/croaky there. But in fact these pieces are simply full of mere activity, desperately trying to give the impression that they’re actually doing something.

These two works will certainly please anyone sufficiently timid and old-fashioned to want contemporary music to sound like it was written in the 1800s, but for those with a more open-minded, forward-looking taste and outlook – those who know full well that, if we want it to, the sun can most definitely be surprised by something new under it – they’re dismally pathetic: a complete compositional irrelevance and a total waste of time.

When lovely woman steps to folly, and…

the more I hear Caroline Shaw since hearing her Partita, the more I love her.

Each to their own, but if ever there were a piece that could be said to have rehabilitated the Pulitzer’s somewhat tarnished reputation, I’m not sure it would be Partita. It’s very clever and arguably quite innovative, and I don’t find it an offensive listen per se, but I’ve never been able to escape the suspicion that it’s chiefly intended as a vehicle for showing off the admittedly impressive technique(s) of her vocal ensemble, Roomful of Teeth. Likewise, in contrast to Simon, I’m not remotely offended by these two essays…but I’m also not racing to give them a second listen…

yes, of course.
that damned T9 with input ‘corrections’.
fix it if you want…

2 Chris L
Partita was the first work written and performed by Caroline, I’ve heard.
The others have only confirmed the general impression, and some works are much more interesting. Pulitzer prize as any other accolade is just a reason to investigate the subject in a more scrupulous way.