Last Sunday, the Barbican in London was treated to an evening of music by Japanese composer Ryoji Ikeda. For much of Ikeda’s career, he’s created a unique kind of electronic music, blending the aloof coldness and potential impenetrability of the most raw sounds – sine tones and noise – with more warm and accessible extra-musical associations derived from aspects of the world around us: temperature, time, space, and above all, data. More about that later. Ikeda’s compositional interests go beyond electronics, though, demonstrated in the first half of the concert which was devoted to his recent Music for Percussion (released on CD earlier this year on Ikeda’s own Codex Edition label), performed by members of Swiss percussion collective Eklekto. This is not the first time Ikeda has ventured into writing for acoustic forces; his 2002 album op. features three works for strings (the first of which i directed the UK première of a few years ago) – works that, considered retrospectively, are at some remove from Ikeda’s usual tone and aesthetic.

The four works that comprise Music for Percussion are much more closely aligned to the rest of Ikeda’s output. The most obvious thing they clarify is his indebtedness to minimalism: the opening section of Body Music [For Duo], featuring isolated claps that slowly coalesce into a concrete rhythmic pattern, could hardly evoke more instantly Steve Reich’s seminal Clapping Music. Yet where Reich was presenting something nascent, germinal, arguably more a concept than a deeply engaging composition, Ikeda’s Music for Percussion is a logical extension and, more importantly, an analogue of his work in electronics. Those claps in Body Music are swiftly supplemented with an assortment of thigh slaps and foot slams to elicit the same kind of stripped-back timbral palette employed in his intricately rhythmic electronic work. However, whereas on disc the connection to Ikeda’s earlier music is emphasised yet further by the dry clarity of the performance, watching Alexandre Babel and Stéphane Garin negotiate their way through the formidable complexities of its constantly varying rhythmic patterns bestowed on the music a palpable frisson of instability – even fragility – that’s entirely absent from Ikeda’s electronic oeuvre. Performed without music, facing towards the audience rather than each other, Garin and Babel were simply mesmerising to watch. 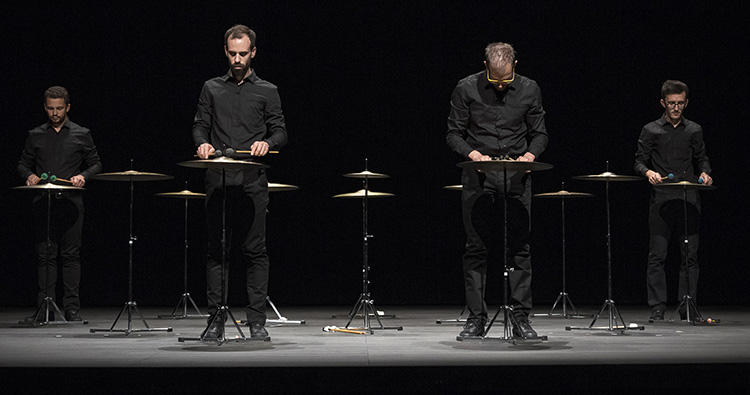 The way in which Music for Percussion acts as an extension of Ikeda’s electronic music was clarified further in the three parts of Metal Music, each of which is essentially concerned with one aspect of those raw sounds i referred to at the start. The first, for two triangles, echoes the tiny, piercing pin-prick blips that litter his work of the last 15 years; the second, for two sets of bowed crotales, brings to mind the beating effects of extended sine tones in close proximity; while the third, for four players tickling an array of suspended cymbals, is an equivalent of shifting bands of coloured noise. It was hard to look away from Garin and Babel’s intense focus on stage, yet shutting one’s eyes helped to delineate the considerable subtlety contained in these three works, and the fascinating interplay between not only the players but also, in the case of Triangles, the differing kinds of texture Ikeda creates. Crotales was simply gorgeous, filling the Barbican Hall with a dense, floating cloud of shifting pitches – looking at the players here was nicely disorienting, as their actions bowing the crotales seemed to bear no relation to what we were hearing – whereas Cymbals, by far the longest of the pieces (in which Babel and Garin were joined by Lucas Genas and Dorian Fretto), occupied a space at more of a distance, an intangible mist of colours that only finds some definition at its very end. This performance of Music for Percussion felt to some extent like a reclamation and revivification of the hitherto tired and moribund entity that is minimalism. Perhaps there’s hope for it yet.

The second half was given over to a presentation of Ikeda’s audiovisual work datamatics [ver. 2.0]. i experienced this piece nine years ago at its first UK performance in Birmingham. In my review on that occasion, i went into some detail about the nature of the episodes that make up the work, so i won’t repeat that here, but one of the most striking things about experiencing datamatics again was the way that it felt even more of our time than it did in 2009. Both sound and visuals take their starting point from real data to form a dazzling, 50-minute sound and light extravaganza that in many ways feels akin to a kind of existential ‘self portrait’. Ikeda celebrates our existence – what and where we are, our nature and our place in the universe – from the most microscopic, flashing through a torrent of information about genes, chromosomes and DNA, to the most enormous, patiently assembling a vast interstellar map from the coordinate data of neighbouring star systems. 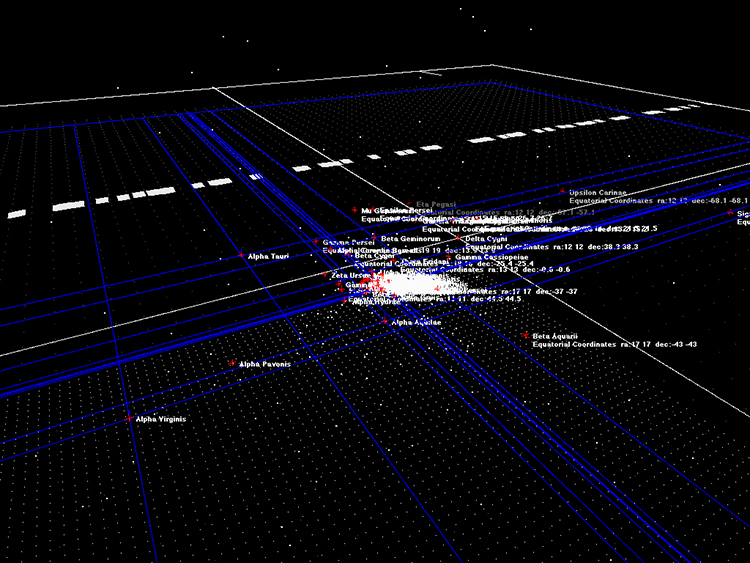 As in all the best art, datamatics brings about paradoxes. Confronted by such an unstoppable stream of data, one feels lost, unable to take in the sheer quantity of information, yet at the same time the more general awareness of the type of information (rather than the specifics of its content) enables one to keep track of the work’s trajectory. Also, there are times when one feels almost infinitely small, not unlike one of the myriad anonymous pixels floating in Ikeda’s infinite sea of spacial coordinates, while at other times, seeing the complexity of our genome being endlessly unravelled across the screen leaves one feeling magnified, even special.

Perhaps the work’s most pertinent connection to humanity’s fundamental dependence on data is datamatics‘ coda, where images from earlier fly across the screen with corresponding data both about the frame in question as well as its current position on the screen. Data about data, data about data about data, and so on ad infinitum. But data, of course, is how we make sense of the universe, of ourselves, and of anything and everything else. The most marvellous thing about datamatics is the way Ryoji Ikeda demonstrates not just that the things data represents are beautiful and amazing but also that the data itself can be beautiful and amazing. The piece is an exuberant, joyous paean to our infinite desire and capacity to enquire and record and visualise and learn and grow and understand, and in the process become more than we were. It is a testament to all that we’ve done, all that we know and all that we are.