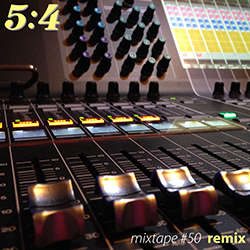 Two hours of radical reinterpretations; here’s the tracklisting in full, together with links to obtain the music.