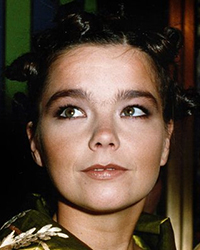 In my most recent mixtape, exploring the noble art of the remix, i included a track by Björk – ‘Crave (Odd Duck Mix)’ – that i mentioned had been made available as a download back in 2001, but which was no longer available. There were in fact four tracks that Björk released as downloads at that time, and since three of them have been unavailable for over a decade, i thought it would be interesting to revisit them.

It’s worth saying at the outset that throughout her career Björk has been more responsible than most musicians for cultivating an extensive catalogue of remixes of her songs. i began collecting her work in 1993, the year she began her solo career (having left the Sugarcubes), and each successive single felt like a substantial release, usually coming in the form of two or sometimes three CDs (later including videotapes or DVDs) containing a mixture of additional songs and remixes of the title track. The number of these remixes was at times considerable – one of her earliest singles, ‘Big Time Sensuality’ (1993), had as many as seven – but beyond this, these singles would also frequently include new renditions of other songs: ‘Violently Happy’ (1994) had acoustic versions of ‘Anchor Song’, ‘Come To Me’ and ‘Human Behaviour’, ‘Isobel’ (1995) featured a harpsichord version of ‘Venus as a Boy’, while ‘It’s Oh So Quiet’ (1995) – one of Björk’s only singles never to have been remixed – included three versions of ‘Hyperballad’, a song that wouldn’t be released as a single until the following year.

Björk’s predilection for remixes has remained consistent, reaching a peak during the late 1990s (the Homogenic period) when ‘Bachelorette’ (1997) and ‘Alarm Call’ (1998) were treated to ten remixes each. More recently, 2011’s Biophilia was supplemented with a series of eight singles collectively titled Biophilia Remixes containing a total of 17 remixes, and while there are far fewer of them, a handful of remixes have been released to accompany her last two singles taken from Utopia (2017), ‘Blissing Me’ and ‘Arisen My Senses’. Furthermore, in addition to singles Björk has also regularly released anthologies of remixes, including The Best Mixes from the Album Debut for All the People Who Don’t Buy White Labels (1994), Telegram (1996), Voltaïc (2009) and Bastards (2012). Remixes are clearly a logical extension of the restless imagination and urge to collaborate that drive Björk’s creativity.

Vespertine, Björk’s fourth album, was released at the end of August 2001,* and in the months beforehand her website featured a special page dedicated to the album. In June, alongside some in-depth information about the forthcoming album – extra-musical inspiration, interviews, song lyrics, biographies of those involved in its production – were a pair of what were called “unofficial remixes”, titled “Crave – Odd Duck Mix” and “Undo – Undone Mix” (here’s a screenshot of the page; soon after these names were abbreviated to just “Odd Duck” and “Undone”). Over the next few months, in the wake of Vespertine‘s release the Björk website had a complete design overhaul, and the Vespertine page was massively expanded. Now, in addition to more information about the making of the album, forthcoming concerts, artwork and desktop wallpapers, links to stream videos, and a multitude of reviews, were two extra audio downloads, titled ‘Verandi’ and ‘Hearts & Bones’ (here’s a later screenshot showing part of the revised page from December 2001). ‘Verandi’ was the odd one out, being the only track of these four that wasn’t a remix of an existing song, and also the only one that had been officially released, included on the first CD and DVD of the single ‘Hidden Place’, released at the start of August 2001, a few weeks before Vespertine. 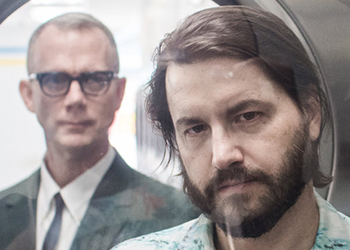 The other three tracks are all remixes of songs from Vespertine created by the American experimental duo Matmos, who were regular collaborators with Björk at the time and worked with her on the album. What makes these remixes unusual is that they’ve never subsequently been included on any official releases (though they’ve occasionally cropped up on bootleg albums). They remained available until around July 2007, when the Vespertine special page was removed from Björk’s website. As they’ve never resurfaced since, they’ve essentially retained their status as “unofficial remixes”, curious oddities that seem to have been forgotten in Björk’s otherwise meticulous, exhaustive cataloguing of her remixes on disc over the years. But i definitely think they deserve to be remembered.

What i love most about all three of these remixes is not just their ingenuity and imagination, but the way Matmos have reworked the songs with such a complete lack of trepidation. There’s no little emotional heft in Björk’s music, yet while not indifferent to this, Matmos nonetheless have other things on their mind, taking something basic (even fundamental) from the original songs and giving it a new context that, depending on your viewpoint, either detracts from or expands upon it. It’s not unfair, i think, to say that these remixes probably say more about Matmos than they do about Björk, but that seems entirely in keeping with the extremely collaborative approach to music-making that has typified Björk’s entire career.

These remixes were only made available as 192kbps mp3s (perhaps due to the fact that, in 2001, far from everyone had a broadband connection), so here they are in all their low-resolution lossy glory.

This track is a reimagining of the song ‘An Echo, a Stain’. Written by Björk with another regular collaborator, Guy Sigsworth, the words of the song draw heavily on Sarah Kane’s remarkable, disturbing and ostensibly disjointed play Crave, and this was in fact the song’s working title. Matmos were involved in the creation of this song, and their ‘Odd Duck Mix’ to some extent turns away from the brooding and, to my mind, deeply complex sensuality of the original in favour of a more playful tone. The remix utilises the soft beats that emerge around halfway through the original (at “I won’t see you”) as the basis for an underscore, over which just one portion of lyrics is used: “One of these days / Soon / Very soon”. Each time this phrase repeats it drops an octave, beginning in the stratosphere and descending until the halfway point when, at the fourth repetition, it arrives at the correct register. In anticipation of this the beats almost entirely stop, enabling the words to resonate properly, and they’re subsequently followed by one other phrase from later in the original song: “I won’t see you / Denied”. This triggers something of a continuation of the descent from earlier, the music draped in reverb as the original phrase is heard at such a low octave Björk’s voice becomes practically alien. Rather nicely, Matmos abruptly silence the reverb, ending the remix in a similar way to how it began, with a weird little mess of glitched sounds.

For this remix, Matmos took on Vespertine‘s first single (and opening track) ‘Hidden Place’. Again, most of the original song is jettisoned – not even a hint of its soaring chorus – the music instead setting up a simple relationship with just a smattering of the lyrics. “I’m not sure what to do with it / Or where to put it” sings Björk, setting of a gentle, leisurely atmosphere with some Hawaiian-esque twangs along the way. It’s all pretty benign until the words “careful, careful” appear, causing the music to become almost completely derailed, sliding off course, seemingly confused and bewildered for the next 30 seconds or so. Matmos seem to be treating this as an admonition from Björk not to drift too far from the original, and so when things get back on track the oscillating chord progression that features prominently in ‘Hidden Place’ is put in the foreground for a while. “I’ll hide it under a blanket / Lull it to sleep” Björk continues, while the remix keeps pirouetting around its collection of shuffling, itchy beats, unexpectedly concluding with a strange cut-up, stuttering rendition of Björk talking, ending with the phrase that gives the remix its name, “hearts and bones”.

‘Undo’ is one of Vespertine‘s finest moments, a simple, delicate, (ec)static song about pulling back from a painful situation in order to “unfold … surrender … undo”. Matmos’ third remix is a complete transformation of this song, bravely ejecting all that ecstasy, retaining just a vestige of the lyrics (“Too hard … surrender … you’re trying too hard”), garnishing it with an opening brass sting and assorted filigree melodic elements crowding around each other, all over more of Matmos’ familiar beats that don’t so much punch as play fight. It’s a wonderfully bizarre melange of borrowed ideas (hints of 16-bar blues repeatedly crop up) rudely curtailed with a harp flourish.

*By complete coincidence, i happened to be in Iceland on the very day in August 2001 that Vespertine was released. Excited to have the chance to buy the album in Björk’s native land, on release day i rushed to the main record store in Reykjavík – which was festooned with banners and a ton of promotional stuff about the album – only to find that this was, it seems, the one place in Europe where it wasn’t yet available. To say i was crestfallen is to put it mildly…