It could hardly be more perfect that the 2019 Dark Music Days – Iceland’s premier contemporary music festival – should have begun last Saturday in complete darkness. This was in Reykjavík’s Nordic House, where the most valiant effort had been made to block out every trace of light for The Riot Ensemble’s world première performance of Georg Friedrich Haas‘ 70-minute Solstices.

Darkness has been a recurring feature of Haas’ work in recent years, from the sporadic lights-out episodes of in vain to the complete blackout of String Quartet No. 10. Every time it occurs in a composition, one is forced to deal with, or at last come to terms with, the darkness, and this was a significant preoccupation during the first few minutes of Solstices. I found myself considering the fact that I often listen with my eyes closed during concerts, and the extent to which this differed from the darkness being imposed on me. But of course there is a huge difference, not just physical but psychological, between simply closing our eyes (thereby shutting down that sense) and having our eyes open but receiving nothing back.

The second thing I found I had to deal with was the technical achievement happening before me: ten musicians, performing in total darkness and therefore, by necessity, entirely from memory. That’s somewhat mind-blowing of itself. It made me think of other artistic technical achievements – such as the long take camera work of Hitchcock or Alejandro Iñárritu – that also have the capacity, if we (and the artists) aren’t careful, to distract from and take us out of the art being created, due to the surprise and incredulity that they cause. 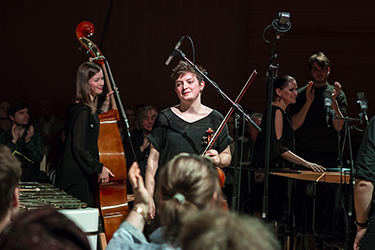 Having tackled these two opening hurdles, I was able to start processing the actual music. Ironically, for a work so flamboyantly situated in total darkness, I found that Solstices continually made me think about light. This was true even from the opening, an episode of mysterious turbulence leading to a sequence of complex microtonal overtone chords over deep drones, like a collection of retooled harmonic series. The mind goes where it goes, and mine immediately went to Richard Strauss’ Eine Alpensinfonie, Haas’ material radically aesthetically shifted but behaviourally redolent of the opening of that work. Except where Strauss moves from mystery into an explosion of sunlight, Haas’ chords seemed to suggest a continuation of pre-dawn, the promise of light but not its actual arrival.

I found myself contemplating times where I had been in that situation. On the Isle of Mull, when I’d woken early and spent at least an hour watching the sun slowly emerge from the night and flood through the valley. In Peru, spending four hours trekking out of Colca Canyon during the night and seeing the first traces of sun hit the tops of the mountains before basking everything in glory. And perhaps more significantly, of the many times (back when I entertained notions of religiosity) that I experienced the Easter Vigil, sitting in a pitch black cathedral taking part in the ritualised progression from death, silence and darkness to life, noise and fire.

When I think of solstices, I think of those in various cultures and religious traditions who similarly sit in the pre-dawn, patiently waiting for darkness to ebb and be slowly replaced by the impossibly brilliant gold of the dawn. But, as I said, Haas’ chords suggested plenty of waiting, the potential of light, though the light itself stubbornly failed to materialise. It begged the question: is the act of waiting more exciting than its fulfillment? Was Solstices thwarting our expectations, and/or was it highlighting where the real focal point of our desires might be located? Are our rituals, our hopes, our dreams and our desires more concerned with journeys than arrivals? 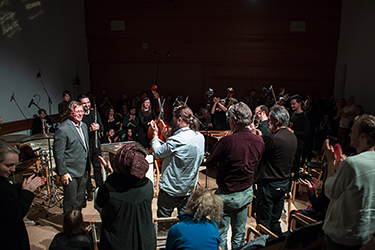 As if seeking to readjust, the piece opted for a different tack. The players seemed to ‘reset’ things, retreating into the darkness rather than seeking to transcend it. Here, we heard unknowable things moving in the space, Ad Reinhardt-esque black-on-black negatively glowing insects and will-o’-the-wisps, manifesting a kind of ‘anti-light’. One wondered if this was going to be Haas’ twist in the tale, presenting the possibility and the expectation of light, and instead delivering its inversion. However, something of a distorted recapitulation took place: mysterious turbulence, complex overtone chords, only now they became pushed to enormous extremes, no longer patiently waiting but actively trying to force the zenith to emerge.

Yet the work’s ultimate culmination suggests Solstices is much more, and much better, than that: a large-scale act of waiting or a kind of shamanic ‘light dance’ ritual or perhaps the darkness covering the face of the deep and the spirit moving over the waters: LET THERE BE LIGHT.