One of the more unconventional performances at this year’s Dark Music Days took place last Thursday evening in the Hörpuhorn, an open exhibition space in the Harpa concert hall complex. It was given by the Copenhagen-based ensemble Neko3, a quartet comprising two percussionists (Kalle Hakosalo and Lorenzo Colombo), a keyboardist (Fei Nie) and a composer (Mads Emil Dreyer). Their concert was one of the most cleverly and effectively put together that i’ve witnessed in a long time, selecting diverse repertoire that shared something fundamental in common, namely the way they transformed the players into differing kinds of quasi-automatons. 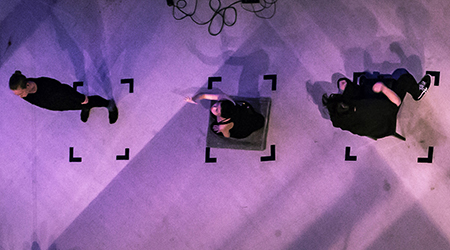 Simon Løffler‘s b was therefore an excellent way to begin. As i’ve noted previously about this piece, it’s less about what it sounds like than what the players are required (forced) to do. In fact, focusing on the sound they’re making isn’t just to miss the point, but is a sure-fire way to becoming entrenched in exponential ennui. b is an essay in what we might call ‘meticulous monotony’, highlighting the basic fact that, in most cases, the ultimate end of composition involves giving performers detailed instructions and then hoping, praying and/or begging that they’ll faithfully carry them out, but pushed here to the point where interpretation is all but squeezed out, and skill and bloody-minded tenacity are all that remain. It’s not so much a musical composition as a piece of performance art, and the same was true of the work at the centre of the concert, Jeppe Ernst‘s Apoteose. Over the course of 15 minutes, its three performers become something worthy of Baudrillard: simulacra of robots designed to simulate humans. Even more than in the Løffler, their actions – many of which made little or no sound – were utmost repetitive and stilted: arms thrust aloft before returning to rest; hands briefly pounding against thighs; the turn of a head and an uncanny smile. It went beyond mere automatisation to a kind of atomisation: we longer saw people or even simulated people, but mere bits of simulated people, body parts literally going through the motions. An extreme example of meticulous monotony, although Apoteose was deeply unsettling i nonetheless felt completely unable to look away even for a moment. 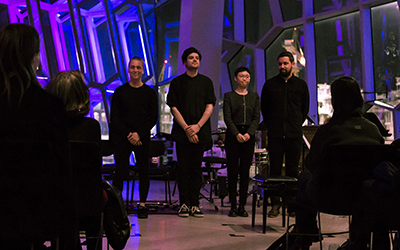 Orakel I-III, by Jeppe Just Christensen, allowed the performers a variety of instruments, though the emphasis remained on their specific actions rather than the sonic outcomes of those actions. Vigorous scratching and shaking; plectra being run over small zithers, occasionally punctuated by imitation dog barks. The latter gave one pause: performers reduced to animals? Not quite; the three parts of Orakel made Neko3 most closely resemble a series of clockwork mechanisms, each with varying ways its limited behaviours and movements could be articulated and combined. This was fascinating enough, but the performance was unwittingly enhanced by a random Harpa employee who kept walking to the side of the space, moving out of sight behind a column, and then walking off again, all for no apparent reason, briefly becoming an additional automaton to the group(!).

Mads Emil Dreyer‘s Forsvindere 2 for celesta, vibraphone, glockenspiel and crotale was the one piece in the concert to concede some slivers of humanity. Like a live-action music box performing a clockwork lullaby, the piece developed from simplicity and clarity to more complex counterpoint, in the process introducing ‘blooms’ of harmony which were impossible to tell where they were coming from or what was causing them. Here was music ostensibly designed to be beautiful, and its effect was hypnotising. This instance of more obviously interpretive music-making only heightened the disarming autonomous monotony (autonomonotony?) in the rest of the programme. At various points in the concert i found myself looking up at the windows running around the outside of Harpa, on which pre-programmed light displays continuously played out, and wondered, from Løffler’s and Christensen’s perspective, whether there was any difference between those lights and the members of the ensemble. This was in many ways a courageous performance by Neko3, a collection of works that challenged and provoked, posing important questions about what it means to be a performer, and the extent to which actions speak louder than sounds. 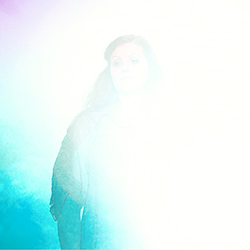 Not quite so unconventional was the concert given by soprano Heiða Árnadóttir that took place last Friday in the narrow space of Mengi, in the centre of Reykjavík. Once again we weren’t provided with the texts for the three pieces she performed, all of them premières, though in the case of Þórunn Björnsdóttir‘s Spirit 1 i’m not in the least bit convinced it would have helped. Heiða ostentatiously moved around the space singing, speaking and otherwise making sounds into a microphone that illuminated her face, while faint speech could be heard on a tape and an image of the sea was projected on the wall behind. i don’t often say this, but i honestly haven’t got the slightest clue.

More meaningful was Helga EA2 by Ásbjörg Jónsdóttir, a work inspired by a poem recounting how Helga, the fiancée of a ship’s carpenter, died when the ship was launched and who was thereafter regarded as its guardian angel. Lacking the text – which serves as a conversation between Helga and the storyteller – was obviously problematic, though in a similar way to the remarks i made about the Dúplum Dúó concert earlier in the week, Heiða’s delivery was able to convey or at least imply a great deal about the essence of the narrative. Somewhat redolent of folk song, Heiða’s surface layer of melody mingled with several more layers on the tape to create a cloud of song, sometimes simply directed outward in no particular direction, other times pointedly aimed straight towards the audience, drawing us more forcefully into the ongoing dialogue. All the same, despite Heiða’s intense performance, without the text it was impossible not to be left feeling rather ‘outside’ Ásbjörg’s music, barely able to engage with it on anything more than a sympathetic or anecdotal level. On the strength of this impressive first performance, though, it’s a work i’d very much like to experience again.

The same problem affected the final work in the concert, Guðmundur Steinn Gunnarsson‘s electroacoustic Laberico Narabida, described as a “solo opera in four simultaneous acts”. While the details of the text again remained unknowable, the specifics seemed to matter a lot less than the more general, multi-faceted way the voice was being used. The opening of the work was breathtaking, Heiða subdivided into four discrete personalities, shifting rapidly between them. Multiple ideas, behaviours and identities impinged upon, collided with and interrupted each other continuously, articulated by Heiða in an unhinged way that drew close comparisons with Jennifer Walshe (particularly her work All the Many Peopls). Gradually this inner conflict became more controlled, Heiða’s voice gently undulating against the electronics which abstracted her pitches to create a strange kind of sonic counterpart. Finally, she began to move extremely slowly towards the back of the performance space, her voice temporarily sounding almost uncomfortably loud yet all the while being replaced by the very much quieter electronics. As Heiða softened into silence, Mengi was left filled with the sound of an electronic chorus of her siren-like familiars; emanating from unseen speakers, it was a beautiful and stunning resolution.