“En festival for eksperimentall musikk”. That’s the strapline for arguably Norway’s most progressive contemporary music festival, Borealis, some of which i was fortunate to attend in Bergen last week. As straplines go it’s almost laughably simple, yet its implications turned out to be impressively far-reaching. The key word, of course, is ‘eksperimentall’, and while many new music festivals are very good at challenging musical boundaries, i’ve not encountered many that have so fearlessly challenged musical hierarchies and definitions. Of the former, there was no meaningful sense in which any particular compositional, performative or presentational aesthetic, approach or outlook – no matter how conventional or radical – was in any way privileged or favoured; of the latter, on numerous occasions i found myself not merely pondering the usual questions about intention and outcome and the like, but much more fundamental matters: “can this even be regarded as music?”. Experiments – true experiments, at least – inevitably take place within a context of belief and risk, contexts that have nothing whatsoever to do with safety or comfort, and as such there was absolutely no doubting that, in the truest possible sense, everything i experienced at Borealis was to some degree “eksperimentall musikk”. 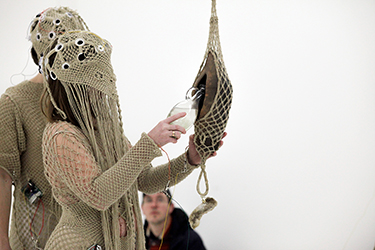 Experiments can fail, though, and while it’s not worth getting bogged down in the relatively few festival fizzles, there’s one that deserves mention due to it being representative of a peculiarly inert kind of performance practice one encounters too often. Conversation Between Bodies #11 was an installation-cum-performance by Daniel Slåttnes & Sara Rönnbäck that took place last Saturday in a long thin gallery space called Aldea. Within the gallery was arranged a fascinating array of handmade accoutrements, objects and vessels carved out of wood and partially enclosed in embroidery, some containing flowers, stones or leaves, all either sitting on the floor or suspended from the ceiling. Two costumes were also there, with obvious electronics fitted in the hoods hinting at the potential for interaction with those wearing them. However, what Conversation Between Bodies #11 consisted of was nothing more than Rönnbäck and Slåttnes slowly moving around the space in their outfits, solemnly repositioning various objects and pouring liquids into the vessels, creating sprinkling cascades to the floor; meanwhile the speakers churned out a dull and essentially unchanging deep noisescape occasionally embellished with tinkling bells. Those electronics in the costumes were evidently a red herring: there was no meaningful connection between sight and sound, and while the creation of newly-imagined rituals with inscrutable symbolism is a fascinating area to explore, this particular example of it was tediously shallow. The duo’s serious earnestness throughout only made it seem all the more pretentious and stupid. 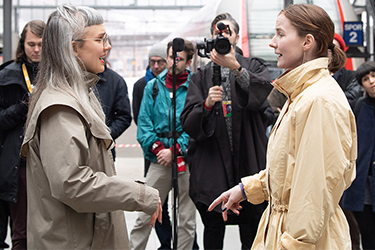 Thankfully, this was the exception in an otherwise bold and unpredictable series of performances. Musician and writer Jenny Hval gave a late evening rendition at the Kunsthall not of a piece but of, in her words, an “about piece”. This involved a kind of poetic ‘thinking aloud’ about the way one enters into a coherent compositional headspace and the role of both her own and others’ voices. It took a little while to get the measure of where she was coming from, but Hval proved to be just as compelling in this tangential type of performance as she always is in her more directly musical creations. Another work obliquely situated in relation to music came from Cara Tolmie and Stine Janvin. The pair’s first collaboration, their piece took place within Bergen’s central train station, and explored a somewhat animalistic bonding between the two of them. Initially at opposite sides of the concourse, as they inched towards each other, calling and responding in short squeaks, there were indications of a process of learning to communicate. This developed into a softer rapid hocketing that accompanied their subsequent progression through the station space. Always moving together side by side, mirroring not only their sounds but also their hand gestures, it was impossible not to see them as being akin to a pair of grebes in an extended, intimate courtship ritual. The conclusion of the piece – playing out on a stage in the middle of the concourse, the two facing one another, toying and caressing various foods against microphones (which seemed to get the pigeons perching up in the ceiling audibly worked up) – was less engaging, but the duo’s established sense of ritualised behaviour was nonetheless preserved. Touching and mesmerising, Janvin and Stolmie deserve extra kudos for performing such slow and intricate movements in what was a seriously chilly environment. 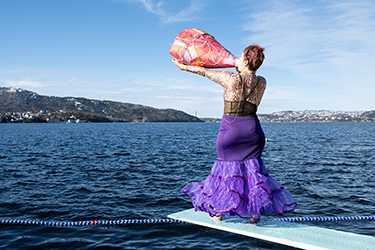 And speaking of cold, an entirely different form of boldness was required on the part of the audience at the start of the festival’s final day. Musikk for Sjøbadding took place at the local swimming pool, which includes an extra cordoned area that extends out into the adjacent fjord, continuing a Borealis tradition that festival-goers take a dip in its frigid waters as the music plays out on land. (To my shame i have to confess i ended up chickening out of this, but i solemnly swear to do it next year.) The combination of being beside the water while lyrical, gently minimalistic saxophone music was performed by the Saxifraga Quartet brought to mind Peter Greenaway’s Drowning By Numbers. More adventurous, both musically and physically, was the preceding performance given by Mexican composer and vocalist Carmina Escobar. Clothed in an elaborate purple dress with a long headdress of blue tassles, she gradually made her way down from a rocky outscrop at the highest point of the swimming pool site, singing and calling through a large cardboard trumpet (fashioned from Borealis festival posters). Arriving at the water, Escobar interacted with various individual swimmers – singing extremely quietly when they put their heads inside the trumpet – before unexpectedly making her way along the diving board over the fjord and, following some final calls across the water, leaping in. Here, too, was the air of ritualised behaviour, of watching and listening to the fascinating actions of a strange and beguiling musical entity.

As with all festivals that genuinely live up to the word ‘experimental’, Borealis had its fair share of the inscrutable, among them Beatrice Gibson‘s rather baffling but surprisingly touching short film Deux Soeurs Qui Ne Sont Pas Soeurs, which had a fittingly aloof score by Laurence Crane (the work perhaps summed itself up best in a pithy remark within its dialogue: “Enigmas resist interpretation”), and the raucous We have to dress gorgeously, a rowdy song for two voices and three pianos that, if you looked beyond its extremely superficial comedic value, left one entirely bemused as to its relevance within a contemporary music festival (or, indeed, anywhere else). 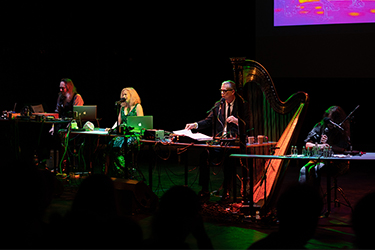 It’s tempting also to file under inscrutable TIME TIME TIME, the much-anticipated new work by Jennifer Walshe and Timothy Morton, receiving its Norwegian première on Saturday night. Pre-performance excitement could hardly have been greater, Walshe joined on stage by the mouthwatering combination of Lee Patterson, string duo Vilde&Inga and Matmos’ M. C. Schmidt, alongside harpist Áine O’Dwyer, trumpeter Eivind Lonning, saxophonist Espen Reinertsen and Timothy Morton himself sitting in a lotus position apparently meditating throughout the entire 90-minute performance. Despite the work’s all caps title shouting out its theme, it came as something of a relief that TIME TIME TIME generally held back from the unhinged, OCD-like excesses that have typified many of Walshe’s larger-scale audiovisual works of recent years (such as A History of the Voice, EVERYTHING IS IMPORTANT and The Total Mountain). There were clearly the makings here of a collection of considered, even earnest, discrete trains of thought about its subject: time as demonstrated through the origins and evolution of the earth; time as manifested in general relativity via black holes and other cosmological phenomena; time as perceived and defined through our own internal clocks; time as harnessed and exploited by time and motion studies. Oh, and there were a load of dinosaurs too. Yet despite how engaging the piece was on an episodic level – and the dinosaur sequence in particular was marvellous, culminating in an immersive surround texture that plunged us back into prehistoric times – it was, as also in those aforementioned works of Walshe’s, difficult to parse its deeper meaning and implications, difficult to know whether its underlying drama was driven by whim or something less capricious, and subsequently difficult to connect with on much more than a level of entertainment. There’s a world of difference between something spectacular and mere spectacle, and i came away from TIME TIME TIME impressed and amused but uncertain as to whether Jennifer Walshe’s latest mash-up of loosely-connected ideas was very much less transitory than time itself. Time will tell.

[…] been impressed by Stine Janvin a couple of months ago at the Borealis festival, it was good to see her in action again. This time she stood alone in a large space, virtually […]