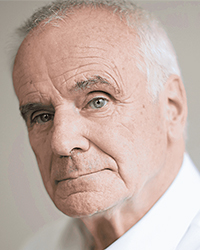 Though it lasts only 23 minutes, is cast in a single movement and was described by its composer as being “very modest”, Peter Maxwell Davies‘ Symphony No. 9 is a seriously substantial, thought-provoking work. Composed in 2012, those of a more republican persuasion might be put off by it being dedicated to “Her Majesty the Queen, on the occasion of her Diamond Jubilee”, but the symphony is about as far from being strewn with bunting as it’s possible to get. It seems to me that the work is, in fact, focused on Britain, and in a way that will always offer food for thought, but which at the present time in particular, with the lamentable, seemingly never-ending wranglings over Brexit potentially reaching their denouement in the coming days, provides a whole lot more to contemplate and consider.

The symphony portrays an entity, a body, represented by the orchestra, that is essentially at war with itself. Max presents this civil war – made to sound deliberately militaristic from the outset – in the first part of the work (though nominally in a single movement, it is structured in two large, connected parts), and while it’s tempting to jump to the conclusion that the cause of the conflict stems from the brass, the reality is more subtle: they just happen to be the loudest and most demonstrative group. In truth, pretty much every section of the orchestra is a distinct faction making no meaningful attempt to integrate with or accommodate the others. At best, there’s a certain amount of ‘listening’ going on, though increasingly the wind, strings and brass all tend to talk over each other, trying to shout each other down and occasionally hurling abstract insults.

Eventually, Max brings some certainty to this tempest of sonic intolerance by rendering it ridiculous: a brass sextet, positioned separately from the rest of the orchestra, strikes up a march, its oom-pahs so unexpected and so absurd that for a few moments everyone else falls silent in apparent disbelief. The war now becomes polarised between these military intrusions from the brass and the combined efforts of the rest of the orchestra to wrestle the music away from them. These efforts lead to large-scale fragmentation – both in terms of actual musical material as well as the coherence of instrumental groups – resulting in a situation where the marches, despite in this context sounding preposterous, being essentially the only music that has a real focus of message. Everything else is a mess of internal tensions and ruptures, often vague and even self-damaging: later on, after a more funereal strain of march, the muscularity of the rest of the orchestra gets so carried away it sounds as if they’re punching themselves in the face.

The outcome of all this bellicose bickering is — well, essentially there is no outcome. Bereft of winners, losers all, the symphony’s second part begins with a lengthy period spent in a valley, strings and then wind – conspicuously, no brass at all – articulating solemnity and shivers. There’s more than a hint of the kind of ghostly atmosphere permeating some of Shostakovich’s more inward symphonic passages, where light feels like it’s barely a concept, let alone a possibility. But what slowly happens in this dark space is the beginnings of a dialogue, where ideas start to be passed between the players and interjections have a more complementary quality, designed to further debate rather than derail it. The music still seems to hurt during this – during one stunning passage, the upper winds gradually ascend so high that their chorale-like material sounds positively tortured – but this shared sense of pain and melancholy is perhaps what drives the orchestra together.

It’s important to note that Max’s approach in engineering this kind of symphonic reconciliation is not to lessen the sense of distinction between the sections of the orchestra, still less to homogenise their respective ideas, but instead to present a kind of “unity of difference”. It’s a thoughtful environment of calm toleration, where contrasting ideas co-exist and are heard, and, ultimately, where common ground is reinforced. As a consequence, the music gains in brightness and clarity, to the point where, a few minutes from the end, the orchestra as one suddenly bristles with energy, and for a short time works together in a climactic peroration. But Max pulls the symphony away from this, concluding by allowing the different sections of the orchestra to speak one final time before falling back to a sober, minor-tinged ending. Not so much triumph as an expression of hope for a future that, if everyone works together like this, might just be possible.

This performance of Peter Maxwell Davies’ Symphony No. 9 took place in August 2012, at the Royal Albert Hall in London during the Proms season, given by the Royal Liverpool Philharmonic Orchestra conducted by Vasily Petrenko.

Dedicated to Her Majesty the Queen, on the occasion of her Diamond Jubilee.

The new Symphony was written between December 2011 and March 2012: it was started in Lazio, Italy, and finished at home in Orkney.

I was in the church of Santa Maria del Popolo, Rome, and realised the potential of the musical equivalent of a central nave with side chapels, where the nave is of one consistent style, and the chapels have other styles, often of a clashing later period, yet still maintaining, because of symmetrical relationships, some kind of strained unity. (This is not particular to Italian churches – one only has to think of Westminster Abbey!).

The work is in one continuous, quite concise movement, divided into two parts.
The first part starts with a slow introduction, which presents the basic thematic material of the whole Symphony, and where the extra brass players, placed to one side of the orchestra, have fanfare flourishes, which I hope are appropriate in a work dedicated to Her Majesty the Queen.

There follows an allegro proper, with the ghost of traditional sonata form, with an exposition, then a development section where material is systematically transformed by interval and rhythmic unit bending, rather than by the usual modulatory Austro-Germanic processes suitable to a more traditionally tonal work. (The work is tonal, but with modal inflections reminiscent of early music – for instance, there are substitute dominants, as in medieval plainsong, and the harmony does not always work from the bass upwards through the texture, but often above and below a tenor or ‘holding’ part, in any register, as in the thirteenth century polyphony.)

The brass sextet interrupts the ‘allegro’ with strident military-style marches (in my mind the equivalent of the church side chapels) with scant respect for its style. This bears no disrespect for military music or bands as such – which, as Master of the Queen’s Music I have come to know well and love – but it presented an opportunity to bear witness, in purely musical terms, to what I can only consider, at the deepest and most heartfelt level, our disastrous interventions in Iraq and Afghanistan – comparable only to the folly of the medieval crusades and the Crimean War. (Having been bombed in the 1941 blitz, and witnessed people on fire running up the street, and having seen bodies dug out of the rubble, I feel that such treatment should not be unleashed on any population without the most compelling reasons, nor on our own military forces; while being not pacifist as such, it must be at least a part of a composer’s task to bear witness, as honestly as possible).
In the second, slow half of the work, the brass sextet integrates more into the orchestral texture, and the ‘chapel’ interruptions, while still contrasting, particularly in terms of speed, are ever more reconciliatory.

Very concerned that the Symphony should not end negatively, as so often I looked to Joseph Haydn for inspiration and guidance. I remembered his String Quartet op. 54 No. 2, particularly relevant with, like this work, a slow movement finale – anticipating Tchaikovsky and Mahler. Fragments of this quartet begin to appear – one of the ‘side chapels’ even consisting of a reworking of the Trio of Haydn’s third movement, and the mood changes to a cautious optimism.

While I feel it would be somehow morally indefensible to give this work a triumphant tonal ending, what happens is as positive as I could make it: the slow introduction returns, with even more ebullient fanfares, and all the diverse elements come together in a full-throated imploration for peace, reconciliation and a true democracy, even in quite difficult circumstances.

I am delighted the Symphony is receiving its first performance in Liverpool by the Philharmonic; I have always loved and admired Liverpool, and have fond memories of concerts conducted by Hugo Rignold in my student years, and, more recently, by Sir Charles Groves.