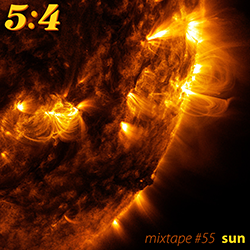 For the latest 5:4 mixtape, inspired by the incredible heat that’s been sizzling its way across Europe recently, i’ve turned to the Sun as my theme. The mix has a somewhat different tone from my Summer mixtape from four years ago (which was, generally, intended to be quite upbeat and – well – ‘summery’), drawing on differing degrees of languorousness, dreaminess and, here and there, some searing intensity. As such, it starts rather slowly and lazily, through relatively gentle tracks by Heiko Maile, Benn Jordan, Fovea Hex, Anna von Hausswolff and Altus, before beginning to pick up some momentum. What follows includes various songs (Lady & Bird, Holly Herndon, Björk, Sigur Rós, C Duncan, Jenny Hval & Susanna, Ghost Twin), some of which are beautifully full-blooded paeans to the sun and/or poetically tap into its connotations of heat and fire. Of the non-vocal tracks, i’ve chosen some for their exuberance (Ashra, Kenny Beltrey, Deborah Pritchard), some for their potent energy (Autechre, Ulver, The Hafler Trio, Aidan Baker, Hecq, Elizabeth Anderson, Ouvrage Fermont, Wolves in the Throne Room, Brian Reitzell) and others for their ecstatic bliss (Ascoil Sun, Andrew Liles, Ben Lukas Boysen & Sebastian Plano, Sleep Party People, Christina Vantzou, 36, Liisa Hirsch). The mixtape begins and ends with short traditional songs from Trio Mediaeval that invoke the sun’s rising and setting.

Two hours of sound that bakes, basks and boils in sunlight; here’s the tracklisting in full, including time positions and links to buy the music.