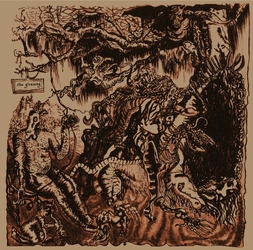 An album that i’ve been returning to again and again in recent months is The Gloaming, the debut release from relief, nom de guerre of composer Chris Berkes. As debuts go – a 42-minute work cast in four broad movements – it’s certainly impressive. A title like The Gloaming, with its connotations of fading crepuscular light and evening weariness, possibly suggests a music inclined towards shadow, its details vague, half-lost in encroaching darkness; the fact that the second part is titled ‘Tenebrae’ only reinforces such an assumption. Yet, interestingly, The Gloaming turns out to be nothing like that at all.

Taken as a whole, the piece is caught between veracity and artifice, in which field recordings make their presence felt in the midst of heavily processed and sculpted sounds. As such, it makes sense to think of The Gloaming as an acousmatic work, setting out to immerse the listener in a vivid metareality, the parameters and landscapes of which are continually shifting and reforming. That being said, one of the great strengths of the work is the relative limitation of its range of materials, which helps to give a greater sense of definition to its soundworld. It’s both earthy – the third part is even titled ‘Vom Grund’ (from the ground) – and airborne, the product of impacted industrial dirt and floating effervescence, manifesting in close juxtapositions of sharply contrasting materials: the clarity of pitch and clouds of noise; hard accented attacks and soft-edged sustained tones; sounds that are immovable and immaterial.

But it’s that most basic contrast i mentioned, between veracity and artifice, the tangible and the abstract, that’s what makes The Gloaming as riveting as it is. It leads to yet another contrast, creating a continual sense of dramatic tension while at the same time feeling entirely organic and necessary. Nothing sounds predictable, yet nothing sounds arbitrary. A kind of stable disorientation. This paradox is achieved in part due to the time Berkes gives to letting the music progress. On the one hand, there’s hardly a moment in the piece that seems static – yet it doesn’t rush: sounds evolve, impose, transform, mutate, transition, yield. In the process, The Gloaming‘s world spans an extremely wide aesthetic extent, embracing vast, filigree agglomerations that at times come close to total saturation; floating wisps of sonic fragrance drifting in space; delicate shimmerations made tense by deep, resonant poundings; and recurring traces of the human voice, kept tantalisingly slightly beyond the cusp of recognition. Often, the music is bifurcated, split into discrete layers or strata that don’t simply force disjunct elements to coexist but provide a potent sense of perspective. And above all, the music is always tactile – among the most pseudo-physical acousmatic music i’ve encountered – so palpable you feel you could just reach out and touch, stroke and caress the contours of its warm, bristling textural surfaces.

It all makes for a captivatingly beautiful listening experience, enveloping the listener in a world that seems like an extension of our own, yet one filled with fantastically transfigured shapes and forms. Every single one of the many times i’ve spent inside The Gloaming, as soon as it’s finished i absolutely can’t wait to go back again.

The Gloaming is released on limited edition vinyl and digital download, both available from the relief Bandcamp site.