Any kind of sound processing – human, mechanical, digital – is a response of some kind: taking a signal, possibly analysing it, before doing something with it or to it. The latest new work at the Proms, Jonny Greenwood‘s Horror vacui, takes this as its starting point and modus operandi. In essence a violin concerto (subtitled “for solo violin and 68 strings”), the music extends the conventional concerto relationship of the one pitted against the many by drawing for inspiration on forms of sound processing, some physical, such as the ‘Palme’ speaker of the Ondes Martenot with its resonant strings, and some electronic, including delay, reverb and stretching. This melding of acoustic and electronic is fundamental to the work as a whole, which seeks to use the former to emulate and transcend the, as Greenwood sees it, limitations of the latter. Another inspirational element comes from the title, referencing kenophobia, the artist’s desire to avoid at all costs empty space.

The way in which the soloist’s material – which is primarily melodic – is ‘processed’ by the orchestra is always extremely apparent, underlined by the work’s clear division into seven movements: Sympathetic Strings (Palme Speaker), Pen (Digital Delay), Chroma I (Spring Reverb), Alice (Tape Echo), Echoes (AMS Pitch Shift/Reverse Delay), Chroma II (High Feedback Delay) and K16 (Granular Stretch). The effects of this ‘processing’ tends towards the creation of two basic kinds of music in the strings: web-like clusters or nebulous clouds formed from sustaining individual notes, and canon-like passages formed from rapid repetitions of short phrases, cycling round at speed to form dense networks of movement. Sometimes the effects of these processes are embellished with clatter and noise, the most striking being a recurring kind of fast-panned rush of wind. 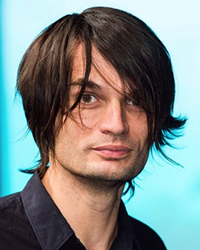 On the one hand, Horror vacui does have potential problems. These two basic kinds of music that i’ve described, though they’re by no means the only thing we hear in the piece, are its main underlying behaviours, and over time a sense of going over the same ground becomes more prominent. This is also due to the specifics of what the solo violin is doing: i described it as “primarily melodic”, but it would be pushing it to describe its material as strongly memorable or having a meaningful sense of direction. It seems to exist solely to provide an ‘input’ for the collection of compositional processes. This behaviour brings to mind the endless performances one still stubbornly encounters littering electroacoustic concerts where a live instrument is fed into a computer (inevitably a Max patch) that does something supposedly interesting with it and spits out its response. Repeat ad libitum, repeat ad nauseam: yawn, yawn, yawn. Horror vacui is better than that, a lot better, but that generic input-response sensibility is nonetheless exacerbated by its 35-minute duration, which doesn’t simply go way beyond its stated length in the Proms guide (22′!) – which is an interesting fact in itself – but also goes beyond what’s reasonably warranted for this somewhat limited kind of musical invention, particularly as – bearing in mind the title – the piece practically never dares to fall silent. Whether that constitutes over-indulgence or over-enthusiasm is a judgement call, but it’s probably a lot of both.

Yet that being said, there’s a great deal to enjoy. From a concerto perspective, it’s nice how the roles of soloist and orchestra – here operating as ‘source’ and ‘process’ – are so clearly demarcated and articulated. And the multi-faceted effects of this ‘processing’ are often very striking. The perspective they establish is vivid, the strings creating varying contexts which the soloist inhabits, and often feels highly visual, as if streaks of colour, emanating from the violin, were spiralling outward to form dense, shifting bands of pigment in the air. Furthermore, while its behavioural range is limited, there’s a lot of variety and development in the music, which additionally features nicely conflicted episodes seemingly made stable by deep drones while at the same being attacked by viciously sharp Bartok pizzicatos, and the closing movement’s emulation of time-stretching is uncannily realistic. Beyond this, there are times when this whole relationship rooted in process seems of secondary importance to simply revelling in an ever-expanding mass of sound, nowhere more stunning than in a sequence, during the central movement, when Greenwood establishes a rich, tonally-focused tutti that blurs whether it’s being formed from lots of tiny movements or more extended pitches (again, probably both).

All of this, plus the level of ambition Greenwood shows in Horror vacui, goes a long, long way to overcoming the work’s deficiencies, which, in hindsight and on further listenings, seem increasingly minor. Ultimately, it’s hard not to get caught up in what’s actually lying at the heart of this piece, underpinning and surpassing all of its notions of ‘process’: a child-like fascination and joy at the sheer magic of sound.

The world première of Jonny Greenwood’s Horror vacui was given by violinist Daniel Pioro, the BBC Proms Youth Ensemble and the BBC National Orchestra of Wales, conducted by Hugh Brunt.

Krzysztof Penderecki studied electronic music in the 1960s, working with early modular synthesisers, white-noise, filters, electronic oscillators – he understood all those contemporary sound-making techniques. But, having learnt everything there was to know about these sounds, he returned to orchestras – knowing, I think, that an orchestra could make these same sounds, and in a far more interesting way.

This is still true. Early electronic music can be fascinating, but it’s in aspic: the recordings have frozen it in the 1960s, or the 1990s – or whenever the technology that was used to make them peaked. But a piece of acoustic music such as Penderecki’s Polymorphia, for example, still sounds timeless 58 years after it was written, even if the technology used – the string orchestra – is much older.

It’s important to make that judgement in the concert hall, though, not from recordings. No-one’s earphones are good enough to replicate the experience of sitting in the same room as an orchestra. I often wonder, if you’ve not heard a piece of music live, whether you really say you’ve heard it at all. You know how it goes, but then, I know how Hamlet goes – but I’ve never seen it, so I don’t know how it feels to be in a theatre with it.

Contemporary orchestral music – if I can still be allowed to call music from the 1960s contemporary – certainly suffers from being recorded, and suffers more than most music. It often translates as something that is simply harsh, acerbic or monotonous. In real life, the sounds are far softer and stranger. The microphones and loudspeakers filter all that out, making things louder, but less colourful. This is easily forgotten when you have a whole Spotify’s-worth of, say, Thomas Adès recordings sitting on your phone. The temptation to hear, and judge, when presented with the whole catalogue, is just too strong. Add to this the impossible task of attending any particular concert – to say nothing of funding the performance of contemporary music – and it’s not easy advice to follow.

So, while it’s undeniably a good thing that the next Thomas Adès can come from anywhere in the world, and we can hear all of his music – all of everyone’s music – despite living hundreds miles from the nearest concert hall, I can’t stop obsessing about the live performance. It’s a question of complexity. Of moving parts. Yes, I love my software, and I love making music with electronics. But I also know that, every time I press play on iTunes, or on a Protools session, or an Ableton session, I’m going to hear exactly the same thing, from the same pair of speakers. There’s no delicacy, because there’s no peril. Ironically, in some ways earlier synthesisers were more complex. Contemporary electronic music no longer uses temperamental equipment, which is good for reliability, but when used for performance, can feel creatively boring. When there’s nearly nothing that can go wrong, where’s the struggle? Where are the surprises, welcome and unwelcome?

This isn’t true with a room full of string players. It’s not even true of one string player, or one pianist, playing a single note. Add other notes, other players, other performances, and the complexity multiplies beyond comprehension. Not that I’m necessarily looking forward to things going wrong tonight: but the potential that every individual note can, and conversely the collective effort to put music across in a room of people, generates an energy that only comes with this kind of group performance.

So I do look forward to this complexity, this lack of certainty. And I think about the individual players too: what kind of day they’ve each had today, how they feel about the music I’m asking them to play. As well, the mechanics of it all – that mass of fingers, and all the horse-hairs on all those bows. The years of collective lessons and practice, from all those teachers, distilled into a few minutes of music-making. Each factor multiplies the complexity again, and it starts to feel like an infinite potential – and those plug-ins that allow you to tweak a few settings in a Protools session begin to look smaller and smaller.

Horror vacui is the fear of empty space, usually in paintings. Children, and outsider artists generally, are liable to feel that a picture is unfinished if there’s any space left unfilled. For this music, I’ve focused on all the different ways there are to electronically create reverb and echoes, and translated them into the complexities of a string orchestra. Daniel Pioro’s solo violin treats the orchestra like a big reverb chamber, triggering resonances, echoes and granular-style stretching of time that emulate how artificial reverbs work. Reverbs that range from the early 20th century, with amplified resonating strings, though tape echoes and analogue delays, to today’s latest digital treatments that stretch and compress time.

Perhaps this comes across as an attempt to copy electronic music – in fact it’s meant to be better. Only meant to be – I get to find out at the same time as everyone else which parts of it, if any, work (the only full rehearsal happened yesterday, and it’s too late to change it now …) so it’s a wide-open goal for hubris. But that’s alright. I love these sounds. I feel lucky and honoured to be given access to the musicians who can make them.