When you listen to music what do you see? What does music look like, and what do images sound like? What’s the relationship between musical and visual stimuli? These questions became something of a recurring consideration during the three days of concerts i attended recently during the opening weekend of the 2019 Ultima festival in Oslo. To be more specific, these questions were caused by the prevalence of visual elements incorporated into many of the pieces being performed. While in some cases the music was enhanced, elsewhere it proved a great deal more problematic.

The most egregious example unfortunately came on the festival’s opening night, at a concert in the city’s grand Konserthus devoted to just a single piece, the world première of Lyden av Arktis (Sound of the Arctic) by Lasse Thoresen. Even before the Arctic Philharmonic began to play, issues were already raising themselves. Thoresen had provided not so much a programme note as an extensive blow-by-blow account of each and every detail of its highly programmatic narrative, inspired by and seeking to depict aspects of Arctic landscape, nature, experience and heritage. Quite apart from the fact that this is the worst possible form of programme note – effectively telling the listener (spoiler alert!) what they should be listening out for and how it should all be interpreted – the only meaningful way to have engaged properly with its tl;dr contents would have been to follow along with the text during the performance, which in the darkened hall would in any case have been impossible. 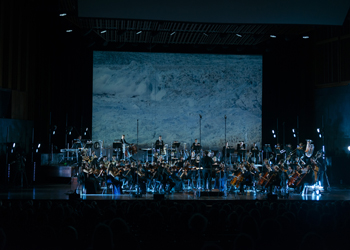 More significant problems emerged when the orchestra began to play. If we hadn’t been told at length about the intricacies of its narrative, there was little in the music that explicitly suggested a fundamental connection to nature. While its musical language was essentially post-Romantic, the majority of its seven movements were essays in variegated texture, occasionally introducing melodies borrowed from Sami culture. It’s by no means disastrous for a composition to be such a stylistic hodge-podge as this, but increasingly it seemed as if Thoresen was co-opting avant-garde techniques to avoid his music otherwise sounding somewhat old-fashioned. At its best, the complexities of its inner narrative led to highly unpredictable (assuming you’d forgotten the text) structural twists that seemed almost wilfully contorted. For the most part, though, the music sounded trapped within its own hermetically-sealed drama, its material too often sounding over-familiar, underpowered and aimless. But what turned the performance into a full-on calamity was the decision to accompany the performance with video showing abstract images drawn from nature. So was the music bringing to life the specific details of the text or the vague suggestions of the images? Or neither? Overall, nothing about this piece or this performance worked: listening with eyes closed – and attempting to forget Thoresen’s explanations – Lyden av Arktis at best managed to sound curious, perhaps evocative, occasionally engaging and often bombastic. But taken as a whole, it came across as both utterly cheap – aiming to do little more than stroke and titillate the audience in the most superficial and cliché-ridden way – and fraudulent, seeking through the words and images to bolster the limitations and deficiencies of power and imagination in the music. The work’s massively drawn-out crescendo ending, overblown drum tremolos accompanied by wildly flashing lights (before, of course, abruptly cutting to black), was one of the most unbelievably tacky and childishly manipulative things i’ve ever witnessed in a concert hall.

Visual elements are obviously necessary in music theatre works, but even here there were times when the earnestness of the visual elements worked to undermine the music. Rolf Wallin‘s Large Bird Mask, given its first performance on Friday evening by Cikada, is a piece inspired by birds: by their songs, by their character – and, above all, by their disturbing decline. Here, too, images were displayed throughout the piece. As well as presenting a series of anonymous bird-related quasi-haikus, the images chiefly consisted of two things: examples of how birds have inspired humanity throughout the course of our existence, and graphics containing facts and statistics about their characteristics and falling numbers. The latter of these, the stats, were the main problem with the piece. They brought to mind a very much worse composition, Malin Bång’s Kudzu, another eco-centric work that, in part (but only in part), failed due to its dependence on force-feeding facts and figures down our throats. To be clear, Large Bird Mask didn’t do that, not really, but as a recurring visual motif it felt increasingly distracting, making the piece feel like a kind of ‘PowerPoint music’, sound and action as a vehicle for data. 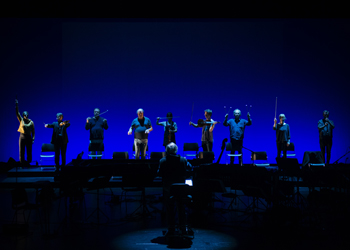 But at the same time, Wallin’s music was often very touching. The members of Cikada, both in their material and, at various points, in their behaviour, imitated the sounds and actions of birds, in a form of shamanistic taking-on and channelling of bird-like properties in order more deeply to comprehend and celebrate them. And while the stats and data become wearisome, the music in some of these episodes – changing in speed in accordance with the changing prevalence of the particular bird over time – was genuinely mesmerising, in particular a sequence focusing on the Skylark. Above all, the authenticity and the integrity of the piece won through: Large Bird Mask is an unequivocal love song to birds, and despite the sporadic issues with its visual elements, it was impossible not to be moved by its motivations and its message. 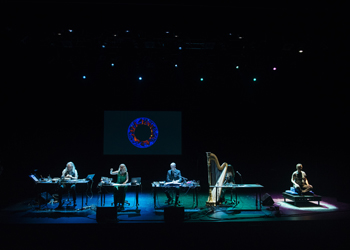 i came away from Large Bird Mask wondering, with regard to the difficulties of combining sound and image, whether Wallin felt that the overall experience was more important than the individual details in the work – and whether by focusing on that the underlying message would be more memorable. The same question could be said to apply to Jennifer Walshe and Timothy Morton‘s TIME TIME TIME, performed on Friday night. Experiencing it again almost exactly six months after my first encounter with the piece at the Borealis festival, i’m not sure whether it’s actually become more opaque with the increased familiarity. If Large Bird Mask is ‘PowerPoint music’, then TIME TIME TIME could be ‘Wikipedia music’, as if Walshe had shredded information on related topics from there to form the libretto of the work, united (for the most part) by considerations and implications of time, delivered via a bizarre, demented and intoxicated cabaret. While the incomprehensibility of its message (if it does, in fact, have one) is to an extent mitigated by how entertaining the piece is – M. C. Schmidt’s delivery was once again delicious, and i was especially impressed by the subtlety of Áine O’Dwyer’s performance – this reduces over the course of its lengthy duration, and the final act of the piece – in which very little happens, perhaps deliberately throwing our attention directly onto the passage of time itself – made a lot of the audience grow visibly restless. i think it’s the only time the word ‘pretentious’ has crept into my mind during one of Walshe’s works, but that might just have been a side-effect of the deliberately melodramatic nature of pretty much any Walshe performance. As an overall experience, TIME TIME TIME makes an unforgettable impression, yet while calling it an ‘entertaining oddity’ feels like it’s doing the piece a disservice, it’s hard to know what else to make of it. 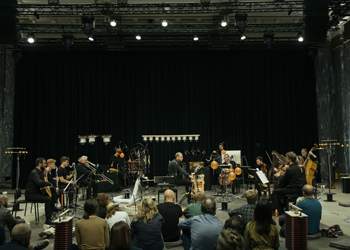 The melding of aural and visual stimulation was best achieved in another work i was experiencing for the second time, Maja S K Ratkje and Kathy Hinde‘s Aeolian. Performed, as it was at the 2017 Huddersfield Festival, by Red Note Ensemble, led from the centre by accordionist Andreas Borregaard, the piece blurs the distinction between composition, installation and sculpture. On the one hand, it felt more episodic, more like a sequence of adjacent but disjunct ‘set pieces’, than previously (which, in hindsight, is also exactly how TIME TIME TIME came across). But this didn’t really matter: the work’s unaffected, even naive exploration of its sound sources – mostly driven by air, causing them to spin, squeeze and squeak – trumps any necessity to make sense of it on a bigger, structural level. Without ever falling into the traps of novelty or mere quirk, Aeolian reminds us not only that there’s something rather remarkable about the way all instruments function – but beyond that, echoing Cage, that pretty much anything at all, if we want it to, can be transformed into a musical instrument. The potential for music – in terms of both how it’s made and what it sounds like – is all around us, everywhere.