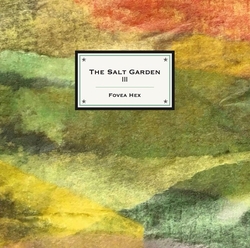 It all began with a trilogy. This was back in 2005 when, over the course of three successive years, Irish musical entity Fovea Hex (singer Clodagh Simonds, together with a changing roster of collaborators) put out the trio of EPs – Bloom, Huge and Allure – that would become collectively known as Neither Speak Nor Remain Silent. An album in all but name, each part of the trilogy was accompanied by an additional disc where the music had been extensively remixed by The Hafler Trio. Following this there was a four-year wait until their only actual album, Here Is Where We Used To Sing, was released in 2011, again with an accompanying disc of remixes (titled Three Beams) by Michael Begg, Colin Potter and William Basinski. After which a further five years would pass before their most recent, even more slow-to-emerge trilogy The Salt Garden, the third and final part of which has recently – finally! – been released.

It’s worth taking a moment just to reflect on two significant aspects of all this. First is the group’s disinterest (for the most part) in more conventional contemporary release practices. i described Neither Speak Nor Remain Silent as an album in all but name, yet at a risk of contradicting myself the fact is that it wasn’t, and isn’t, an album, but – to borrow a phrase from The Hafler Trio – a ‘trilogy in three parts’. There’s something rather old-school about it, not unlike like the practice during the 1990s in which, due to the popularity of the relatively new CD medium, instead of releasing bog standard singles, artists would instead put out dual maxi-singles, one disc of which typically featured three or four songs, the other disc a collection of remixes. Taken together, the two discs would often last as long (if not longer) than an album, and being able to spend time with a cluster of songs that were then reworked was always an enormously enjoyable listening experience.

Second is Fovea Hex’s disinterest in seeking to put out as much music in as short a time as possible. The entirety of their output (discounting remixes) in their nearly a decade-and-a-half life span amounts to six EPs, one album and an assortment of individual tracks that together only just amount to three hours of music. It’s a point i know i’ve made several times elsewhere on here, but the old adage of “quality not quantity” is more true today in music than it’s ever been. It’s by turns saddening and maddening to see certain artists striving to churn out vast quantities of mere stuff in a desperate attempt at relevance and aspirations of fecundity. And from the perspective of a listener, at a time when we’re all becoming increasingly adjusted to a lifestyle where we expect everything to be available now, to be forced to wait – for years on end – is most definitely no bad thing. Less is always – always – more, and in the case of Fovea Hex it enables each of their releases to be heard for what it is: small-scale, jewel-like objects of incredible beauty and elegance, that in ways i still struggle to comprehend manage to sound utmost simple and deeply complex simultaneously.

The Salt Garden III is everything one would have expected it to be. On the one hand, i’ll confess there’s a part of me that was a little surprised at how extremely similar these four tracks are to the rest of the Fovea Hex back catalogue. In some ways they’re like a synthesis of what went before – and yet, you could argue that each and every Fovea Hex release is a resynthesis of the same basic elements, almost like a continual process of returning back into the chrysalis in order to transform into ever-new variants of butterfly. Variations on a theme. It’s a theme that has roots in folk music, articulated by Simonds’ delicately undulating scalic melodies that often come to resemble mediaeval chant, particularly in the way they’re so often doubled at the fifth, turning into a kind of neo-organum. This probably stems from the fact that pretty much all of Fovea Hex’s output is either directly or implicitly dronal, everything happening relative to an omnipresent, seemingly infinite, fundamental tone. This in turn connects it with the world of ambient, and the other constant of their music is that each song or instrumental (not all of them feature words) are infused with an ethereal, exotic blend of fragrance that’s heady but never opulent, forming a bridge between earth and sky, between acoustic and electronic, and between past, present and future, turning the music into an entirely unique kind of sonic magical realism.

Despite what i said about drones and fundamentals, opening track ‘The Land’s Alright’ forces a reappraisal of this due to a significant shift in its main pitch at a critical point. Moving up from G to C, over time it feels as if the whole point of the song was an extended perfect cadence, the seemingly stable opening stanzas all pointing towards an inevitable, inexorable rise upward to something altogether more majestic. Instrumental track ‘Trisamma’ progresses from a piano feeling its way in a void to a string-laden contemplation redolent of Arvo Pärt’s Cantus in Memoriam Benjamin Britten, its tone blending melancholy and happiness. An occasional feature of Fovea Hex’s music is when Simonds’ voice is joined by others, and as such ‘A Million Fires’ is akin to a slow communal hymn, tapping into something elemental and ancient, simple but wistful, achingly human. Final track ‘The Given Heat’ is built upon a semitone oscillating foundation, becoming an intoxicating, lullaby-like, blissed-out finale. Like every other Fovea Hex release, The Salt Garden III is stunning, timeless and among the most wondrous music you’ll ever be fortunate enough to hear.

The Salt Garden III is a limited edition available on CD and 10″ vinyl, the latter of which includes an additional CD featuring a remix by Steven Wilson, curiously presented as a single 23-minute track and in its four separate sections. My advice is to focus on the longer composite, which like its predecessors makes for a beautiful counterpart and epilogue to the songs themselves. All the details can be found on the Janet Records website, where you can also get your hands on most of the Fovea Hex back catalogue, much of which is currently available at seriously reduced prices. Digital downloads are also available via Bandcamp.