i’m going to start with an observation, a complaint and a plea. Yesterday evening’s concert given by Birmingham Contemporary Music Group featured four pieces of music that together lasted one hour and two minutes. The actual concert lasted more than double that length. It continues a trend that appears to be plaguing BCMG concerts more and more in which the duration of events has become in some cases massively extended due to the length of time being taken to set things up between pieces – exacerbated last night by having two intervals. Perhaps those organising BCMG concerts are trying to turn them into a whole evening experience, but for me it’s become an absurd example of (deliberately or otherwise) stretching out not very much music into very much concert. Not only does this break up the engagement factor – one’s focus being regularly interrupted – but it also makes for a huge contrast with pretty much all other contemporary music concerts i’ve attended lately (in the UK and abroad), most of which don’t even bother with an interval at all, even if the music lasts up to two hours. So my plea is that those who decide these things at BCMG acknowledge the fact that this approach needs to be, at least, massively reigned in, and that changeovers between pieces need to be quick and efficient – definitely without the need for an interval (or, indeed, two of them) to attempt to hide how long it’s taking. 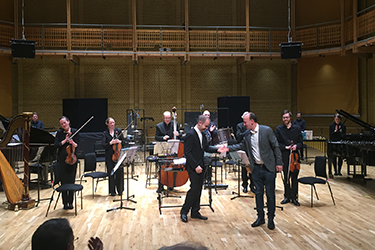 As for those four pieces of music, i think it’s fair to say that three of them opted for different forms of immediacy, with one bravely attempting the complete opposite. The one was Richard Causton‘s Transients, receiving its world première, a piece for two pianos and ensemble that sets out to “make the piano speak”. Causton doesn’t mean that figuratively; the material is derived from attempts to capture the details from spectral analyses of speech recordings of Emily Dickinson’s poem ‘I heard a fly buzz’. Reading the composer’s description of this process immediately brought to mind the work of maverick Indian composer Clarence Barlow, whose ability to capture speech patterns in some of his compositions (focusing primarily on formant shapes, if i recall correctly) is, to say the least, uncanny. i wish it were possible to say the same about Transients. First things first: structured in four movements, the pianos only really come into the foreground in a couple of them (2 and 4), so the whole relationship between these instruments and the rest of the players felt decidedly weird. It’s clearly not a double piano concerto, yet the pianos didn’t really feel integrated into the rest of the ensemble either. Furthermore, the presence or otherwise of the speech-derived material didn’t seem to be meaningfully present in the less piano-focused movements. Quite the opposite, in fact, and while the music in these odd-numbered movements – fast, spiky, hocketed stuff alternating with a more spaced-out, suspended environment in the first; a cautious, quiet, halting, shimmering lyricism in the third – were harmless enough, and sometimes quite beautiful, it felt increasingly impossible to know what kind of meaningful connection they made to the other two movements. As for that speech-derived material; it ended up evoking the technique of a different composer: Olivier Messiaen’s ‘langage communicable’, used most prominently in his 1969 organ cycle Méditations sur le Mystère de la Sainte Trinité. That ‘langage’ wasn’t, and still isn’t, ‘communicable’ in any meaningful sense, and it’s only through repeated listening that one can start to make sense of what Messiaen is driving at, and only through referring to a cheat sheet that one can actually parse what the instrument is saying. The same can absolutely be said of Transients; it may be that Causton isn’t bothered that we’re able to identify the words – although, if that’s true, why go to such great lengths to painstakingly reproduce their sonic content? It left me disappointed and frustrated; i suspect further listenings (probably many of them) are required to make real sense of what the piece is and what it’s trying to do.

i said the other three works on the programme were directed more towards immediacy, and in the case of Shiori Usui‘s Deep, the aim seemed to be to turn the CBSO Centre into a kind of underwater habitat. In a similar way to being underwater, sound was initially attenuated, registrally polarised into bands of very low rumble and growl and very high glissandos and whistles. Extremely arresting, almost hypnotically so, it thereafter opened out into what often felt like a heightened, stylised kind of ritual, enhanced by its two bass drums being played in almost flamboyant fashion at either side of the space. Beyond this, though, Usui explored textural sequences of varying density, some involving the players moving around the space, increasing the sense that the CBSO Centre was now an aquatic tank, and the players of BCMG creatures moving around inside it. Deep was undoubtedly too long for its range of both material and timbre (its endless vocal croaking, in particular, quickly became a tiring effect) but its intentions were clear, unfussy and more or less successful. 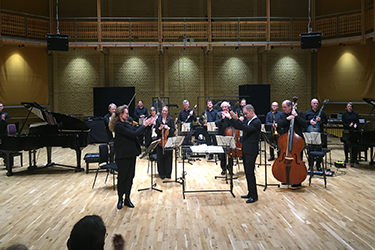 From deep water to deep shadow, and the first UK performance of Rebecca Saunders‘ Scar. Again there was immediacy: indeed, you didn’t really need to know the title to perceive the work as sinewy stretches of tissue connecting viciously violent, brutal instances of catastrophe. As in so much of Saunders’ work, the slow pace of the piece indicated not so much caution as poise, always pointing forward. From this came an omnipresent sense of certainty, that each and every action was definite, precise, deliberate – which only made the starkness of the music feel more powerful, to the point that – another Saunders trait – it sounded as if it were etched in black and white. To some degree, i found myself – as i often have listening to Saunders’ music of recent years – again pondering the question of tautology, and the extent to which we’ve heard many of these sounds, both individually and in combination, in many of her previous works. In a way unlike most other composers, it’s impossible not to hear most of her output as inhabiting, and providing windows into, the same world. Yet it’s a compelling world, beautiful and distressed in equal measure, typified by extremes of behaviour, attitude, temperament, dynamic and hue, oscillating between exquisite fragility and intense fury. The beauty of Scar is admittedly haunted – maybe even hollow, as if its blood had run cold – and also damaged: listening to the piece really did feel like running one’s fingers along scar tissue, feeling the physical smoothness and contortion and sensing the trauma that led to it. As such, the violence in the work acts both as a memento of former anguish and a recapturing of the cause itself, violently rupturing the default silence in short bursts of agony. Even more than is usual in Saunders’ music, the pain (physical, emotional) running throughout Scar felt overwhelmingly palpable and real. 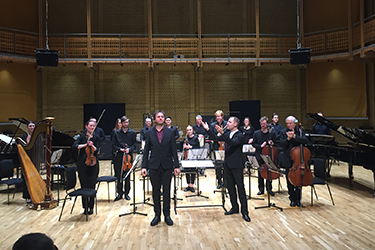 Just as immediate but much more overtly entertaining was Tension by Slovenian composer Vito Žuraj, receiving its first performance in a revised version. What made the work so instantly engaging was its broad, episodic approach to behaviour, along the way incorporating (but, thankfully, not fetishising) some unusual sounds and timbres. It wasn’t, ultimately, the specifics or the intricacies of these exotica that were important but the way Žuraj embedded them into the work’s segmented narrative, passing through extended complex risings or fallings, textural networks of tiny rapid tappings, and occasional full-blooded climactic bursts of pure friction, given extra gravitas from rubbed low harp strings. The coordination of the performance was at times quite wayward, though this tended to feed into the pervading sense of ill-disciplined irreverence that was perhaps the key defining feature of Tension. Definitely a work i immediately wanted to listen to again afterwards, and not at all because it was necessary but just to relive its joyous mayhem all over again.