As an interlude to my coverage of the 2020 Dark Music Days, I have to say something about two artworks that weren’t part of the festival but which contributed significantly to my time in Reykjavík. 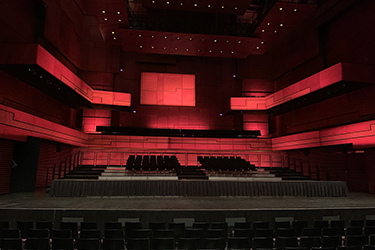 First is CAT 192, the product of a collaboration in 2013 by composer Hlynur Aðils Vilmarsson and conductor Ilan Volkov. It’s not so much music as a piece of performance art for the main hall, Eldborg, within the city’s principal concert venue Harpa. The work literally ‘plays’ the hall, utilising the array of doors and chambers, the shutters, blinds and curtains, as well as the lights and part of the stage canopy.

It was decidedly uncanny. Being inside Eldborg when it’s essentially empty (at the performance I attended there were maybe around 40 people) was somewhat unnerving, mainly due to the hall’s deeply glowering red walls which, now dimly lit in an otherwise very dark space, gave off the air of some kind of malevolent presence. This heightened the experience of witnessing the hall’s ‘limbs’ moving seemingly of their own accord. It was as if an artificial intelligence, or even the beginnings of some kind of self-willed sentience, had spontaneously occurred at Harpa, which was now awake and flexing its muscles for the first time. Though in some ways rather primitive – it was, after all, limited to the range of motions the hall can make – CAT 192 was nonetheless an effective and amusing ballet for the building, highlighting also the tones, rhythms and other sonic throbs, thrums and patterns that emerged from its various movements, which were all the more striking when it wasn’t immediately possible to tell what or where the sounds were coming from.

The below short video includes an introduction to the piece from Ilan Volkov as well as some glimpses of the piece in action.

Just four minutes’ walk away from the tenebrous interior of Harpa’s Eldborg hall I found myself within about as opposite an environment as could possibly be imagined. In Reykjavík Art Museum I encountered Chromo Sapiens, an installation piece by Hrafnhildur Arnardóttir, a.k.a. Shoplifter, premièred at the 2019 Vienna Biennale. In some respects it isn’t an easy piece to talk about, simply because of how overwhelming it was both visually and aurally. 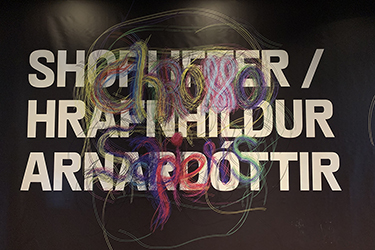 Describing it is straightforward enough. Three chambers – small, large, small – the insides of which were festooned in vast quantities of soft hair, either forming a kind of inner curtain wall or dangling down in long, shaggy stalactites. This was striking enough, but everywhere your eyes fell they found a new colour, as if a rainbow had been brought into the space and detonated, showering everything in kaleidoscopic shades of pigment. These shades were filtered: dark tones of black, purple and green in the first chamber; light pastel hues of pink, yellow and white in the last; while the large central space featured everything in between, a dazzling, psychedelic display that easily ranks among the most incredibly beautiful sights I’ve ever clapped eyes on. Permeating all three chambers was music by Icelandic group HAM, a five-part album specially-conceived to accompany the installation. These sounds complemented the sights perfectly, filling the space with ambience that felt simultaneously dark and light, brooding and uplifting, providing a nicely intangible aural soundworld for the ultra-tangible visual context.

Honestly, I never wanted to leave. Chromo Sapiens was comforting yet challenging, flooding and saturating the senses within the confines of what felt like perhaps the most completely safe space I’ve ever entered. There was something womb-like about it, as if the work was somehow cradling me, offering me respite from the world. The reason it’s not easy to talk about is because of how instinctual this was, how personal it felt. Like the best art, we find a way to connect to it that’s entirely unique to each of us. I was hardly in a bad mood or place when I entered, yet all I know is that when I finally left, I nonetheless felt lighter, brighter, happier. The work elevated me, and in the seven days that have passed I really don’t think I’ve come back down.

Chromo Sapiens is at the Reykjavík Art Museum until 19 March; full details can be found here. The album of the same name was released by HAM a couple of weeks ago; it’s available on vinyl in a standard edition available from several Icelandic shops such as Lucky Records, and a (stunningly expensive) deluxe edition, fringed with hair, only to be found in the museum shop, as well as digital download. It can also be streamed from the usual places, including Spotify and YouTube. To give you just a flavour of the glorious, gentle assault on the senses that is Chromo Sapiens, below are some photos I took during my time there and a short, four-minute video tour through its three caves of wonder. 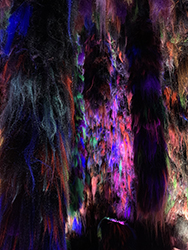 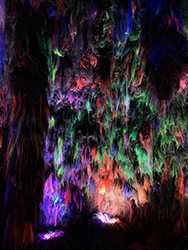 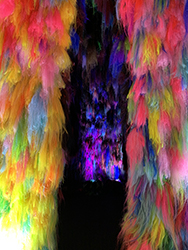 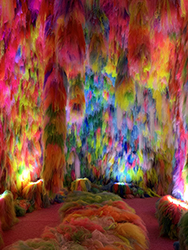 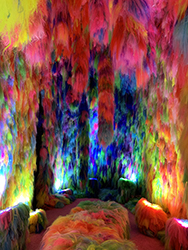 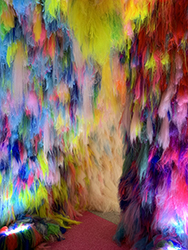 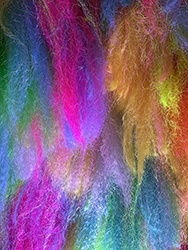 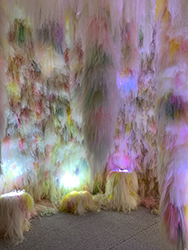 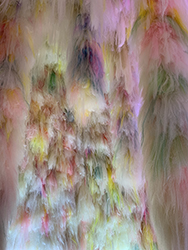