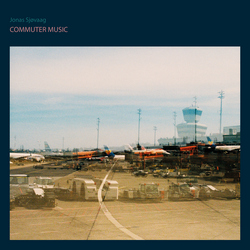 i don’t know if it’s a weird kind of defocused, more-easily-distracted side-effect of the lockdown, but lately i’ve been finding it easiest to engage with mid-length albums where i can immerse myself for half an hour or so. Happily, quite a few of these have found their way to me in recent times, among them Commuter Music by Norwegian musician Jonas Sjøvaag. Sjøvaag is a drummer, jazz musician and improviser, aspects that all audibly feed into the tone and aesthetic that permeates Commuter Music, which is most redolent of 1970s kosmische musik. The album is even structured in the same way as Tangerine Dream’s classics Atem and Phaedra, beginning with the longest track durations that get progressively shorter. Without being overtly pastiche, what the music captures nicely is the simultaneous combination of slow- and fast- moving elements that typifies that kind of music, along with an improvisational nature in which seemingly anything could materialise above these sleek surface layers and sound entirely congruous.

The titles of the three tracks indicate they’re essentially variations on this same behavioural theme. ‘First leg’ exhibits an overall sense of oscillating or tilting between adjacent underlying harmonies while filigree details play out over this foundation. Its development is signposted by gentle shifts in the behaviour: the introduction of a faster bassline; a 3-beat tapping pulse that feels in and out of sync at the same time; the introduction of guitar chords; electronic pulses striking the beat for a while. The kind of equilibrium created here is lovely, continually allowing us to drift away (or even off) in its stasis, pulling us back in at these periodic moments of evolution and change. It’s easy to hear how these kind of structures formed the basis for what would become ambient music at the end of the ’70s. Details are harder to make out in ‘Second stretch’, existing in the environs of a deep buzzy and throbbing drone. A languid deep pulse proves intriguing – are they beats or pitches? and ultimately, what’s the difference? – and other elements are similarly tentative, comprising light percussive taps and cowbell-like tremolos. The most prominent action taking place here comes with the appearance of a low analogue synth melody that causes everything to ramp up in intensity before subsiding back into the omnipresent drone. ‘Third Wave’ concludes the album with what is initially beat-based music, a kind of nervous tic itching and shuffling against which an assortment of sounds ping and collide. Around halfway through, following the most blink-and-you’ll-miss-it kind of mini-climax, the music dramatically shape-shifts into rapid rising plunky arpeggios delicately dusted with blips and brushes.

Throughout these three tracks, there’s something unaccountably warm and reassuring about its fundamental sense of stability, hearing its assorted details gently do their thing over a firmament that (almost more in hindsight) feels firm and secure. i first listened on a rainy blah day – which Commuter Music made me forget about completely.

Commuter Music is a digital-only release that came out in January on Sjøvaag’s label Shipwreckords, available via Bandcamp.