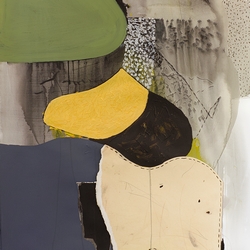 Another mid-length album i’ve recently been immersing myself within is Meander by Liquid Transmitter, nom de guerre for Canadian sound artist Jamie Drouin. Both the title and the artist’s pseudonym are well-suited to the six tracks on this album. They operate in a way that sits on the cusp of what we perceive to be active or passive decision-making, and throughout there’s the distinct impression of sound objects behaving like liquefied matter. These aspects combine to evoke Eno-esque sound environments, and this is no accident: Drouin describes the six pieces as

conceptual retreats from the failings/flailings of the world at large. They function as backdrops to basic activities of the day, elevating these actions, and tinting my living space.

It would be reasonable to think of each of these compositions as a ‘diatonic liquid’, the motes of pitch floating in each one being aligned to and for the most part limited by its respective modality. This effectively bestows on each piece a unique colour palette, so perhaps it’s not too fanciful, considering the combination of liquid, floating and colour, to say that Meander is somewhat akin to the behaviour of a lava lamp.

In some of the pieces, movement is less pronounced. ‘Meander 3’ is a case in point, with many of its pitch globules hanging semi-suspended, tickled periodically by accumulations of smaller droplets passing by. ‘Meander 1’ is even more still, the effect reinforced by its range of pitches being relatively small, and they don’t so much rise and fall as glisten and pulsate, in the process causing variations in density. ‘Meander 5’ is more involving, inasmuch as it sounds like the product of some intricately clunky machine, but one with absolutely no hard edges, as if its mechanics were constructed from nothing solid. The seemingly hands-off resulting output is similarly gelatinous and wobbly, here and there briefly solidifying into what sound like small, clinking spheres of glass. ‘Meander 6’ also feels passive in its (inter)actions and is yet more ostensibly complicated, its activity occupying a denser space surrounded by just a few bubbles of drifting pitch.

The highlights of the album in part achieve more by doing less. ‘Meander 4’ is the simplest of all six pieces, as if tiny blobs of ink were being dropped into liquid and dissolving into it. Like ‘Meander 1’ its range of tones is limited, but the exquisite delicacy of them gives the impression of being heard at a microscopic level, suspended by quantum buoyancy. Here more than anywhere else harmony becomes paramount, each tone forming part of either several higher drifting melodic lines or a deeper bass sediment. This is Meander at its most overtly ambient, establishing a steady state of stasis and change that’s mesmerising to behold. ‘Meander 2’ goes the opposite way, harmonically-speaking, gently blurring the plinky splunky pitch content of its viscous medium through various glimmerings and throbbings, and occasional (perhaps external) percussive scratches and clunks. It has something of the soft machine quality of ‘Meander 5’ but its comparative strangeness makes it a more hypnotic experience.

The sense of perspective in all six tracks is palpable; it’s not so much like looking at a lava lamp as actually floating within one, perceiving the bobbing pitch motes up close and from a distance. As such, in both a literal and a figurative sense, Meander is extraordinarily immersive, as well as being some of the most beautiful ambient i’ve heard in a very long time.

A digital-only album, Meander was released in February by Infrequency Editions and is available via Bandcamp either from the label or directly from Liquid Transmitter.