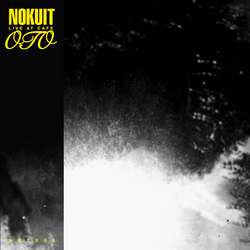 While it remains impossible to experience live performances at the moment, i’ve been enjoying doing it virtually by immersing myself in Live at Cafe OTO, a recording of the half-hour debut performance given there in summer 2018 by sound artist Nokuit. i need to cut to the chase with this one: the thing i love most about it is the ambiguity of its tone. It’s an ambiguity nicely suggested in the cover artwork, where a dark, grainy image (possibly of a distant block of flats) is aggressively challenged by an explosion of impossible brightness in the foreground. A similar polarisation of black and white can be heard in the music, conveying both a Damoclesian dystopian doom alongside burning shafts of hopeful radiance. It makes for a highly dramatic, almost melodramatic, narrative, caught in a volatile space where we find ourselves pulled down, brought low, only then to be buoyed up and raised aloft, in every sense elevated.

The music emerges out of Cafe OTO’s murmuring ambiance into a mess of squeaky friction and unintelligible speech, a disorienting but engaging opening that soon finds stability in a powerful 2-note (major third) bass oscillation. Even as early as this, though, there’s an ominous tinge to this stability, and it’s hard to say whether it’s a relief or not to return to the more confusing melée of elements that eventually causes it to break down, channelled through a forceful column of noise. This intense balancing act continues through similarly sharp contrasts of clarity and (un)certainty: a beautiful, intense early climax around nine minutes in, laden with squelch and pounding impacts, breaks apart and suddenly everything is just ticking over, pulled back but poised. A new semitone oscillation starts up, its tones rippling with distortion like beams of light too bright for dark-adapted eyes to be able to register them properly.

The latter half of the performance is just as conflicted. Light is lost in a lengthy tract of hovering vagueness peppered unsettlingly with loud calls, vaguely militaristic noises and distant traces of angelic singing. Though highly restrained, there’s nonetheless something apocalyptic about it, which makes its hovering nature all the more troubling, like a diaphanous dark veil hanging over the skies, while the crunching regularity of marching feet passes by. The drone that by implication underpins all this therefore becomes the opposite of a foundation, turning into an anchor, forcing things to be held in place – which has an interesting effect on the subsequent return of the original bass oscillation. Now it seems liberating, even uplifting, though by this stage in the complex narrative what’s black and what’s white is very hard to tell. Industrial noise prevails, only to yield unexpectedly to a reconfigured version of the semitone oscillation, now enlarged to a tone and with similar hints of oversaturated distortion to earlier, though its brightness is now tempered with a greater feeling of warmth.

Depending on your perspective, the closing minutes are a return to a sense of imposing threat or an indication that this recurrence of whatever-it-is is actually a kind of landmark, the oscillations (all of them) acting like varying ritornellos around which we can orient ourselves. To say i’m not sure brings me back to where i started, to the fundamental ambiguity that runs throughout Nokuit’s performance and makes it the dazzlingly vivid, disquieting and energising experience that it is. And quite apart from all this, it’s a reminder of the wonders that await us when we can get back to the glory of live performances once again.

Live at Cafe OTO is available from NKT Records on limited edition cassette tape and digital download (note the discount code, ‘5GKILLS’ to get 19% off).