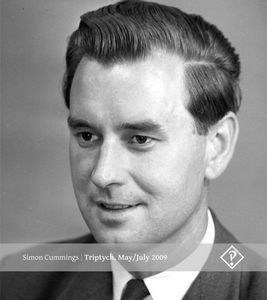 A few days ago marked the 25th anniversary of my father’s death. It seems like such an impossibly long time ago, yet his all-too-brief presence in my life, and all-too-long absence from it, continue to resonate in me and make their mark in my life and in my music. Back in 2009, i created a three-part composition exploring my memories of him, which by then were becoming intangible and strange. That work, one of my earliest electronic works, was Triptych, May/July 2009, and as well as being an important act of catharsis, it was a significant step forward in my musical technique and language. The piece was also the first of mine that i put out on a limited edition, self-released CD. It did rather well, but during a recent lockdown-inspired spring clean i discovered a small cache of the remaining CDs nestling in a box.

So, as today – 5 June – is another of Bandcamp’s occasions when they’re generously waiving their fees, i’ve decided for the next 24 hours to make these CDs available free – the only charge is to cover the postage costs. And i’ve made the digital download version free as well, so you can pay whatever you like for that – of course, anything you do decide to pay will be very gratefully received. i’ve also re-introduced the 70% discount that means you can obtain my entire digital discography for less than a tenner (look for the ‘Buy Digital Discography’ link). If you’d like to take advantage of any of these one-day offers, head over to the Triptych page on my Bandcamp site.

If memory serves, this was the first pieces of yours I ever bought, Simon. It wouldn’t have been long after my own father received his diagnosis, which may well have influenced my choice. While this means that I don’t need another copy, your generous-hearted post reminded me that it was too long since I’d last listened to it…and what a bleakly beautiful thing it remains.