A few months back i wrote about about the appearance of various releases by The Hafler Trio on Bandcamp, which quite apart from being highly unexpected (hitherto Andrew M. McKenzie had seemed opposed to his output being released in a digital format) is a very good thing indeed, since most Hafler releases – many of which, for anyone passionate about electronic music, are quintessential – are by now long out of print and as a result difficult to obtain. More recently McKenzie has extended this by reissuing audiovisual works via Gumroad, including two seminal (in every sense of the word) Hafler Trio EPs, Masturbatorium (1991) and FUCK (1992).

These works form the first two thirds of a never-completed trilogy exploring, for want of a more actually meaningful term, “sexual energy”, with both of them aspiring to go against what were at the time prevailing trends of sexual thought, discourse and propriety. Masturbatorium had its origins in a performance/ritual by the legend that is Annie Sprinkle. The performance evidently explored her progression from sexual naivety to maturity, culminating (or should that be climaxing?) in a sequence that McKenzie has described as “how to have an orgasm with your breath”. Sprinkle’s show began in the USA, but for its move to Europe McKenzie suggested replacing the New Age-esque soundtrack Sprinkle had used with something more directly applicable, incorporating the sounds of Sprinkle’s own body, layered and manipulated. FUCK was conceived as a male-oriented counterpart to this, but despite its somewhat outré shouty title is neither about fucking nor the conventional idea of sexual climax. Quite the contrary: it was intended to work in reverse, intended, in McKenzie’s words, to “get men to slow down, not to ‘burst the balloon’, not to concentrate on result but on process”.

i’ve known these EPs well for many years, and i’m happy to admit that i was sceptical about the idea of watching them – or indeed anything by The Hafler Trio – as for me their output is so incredibly engaging and immersive from a purely listening perspective. However, in both cases the work benefits hugely from being experienced in its full audiovisual form. This is in no small part due to the nature of the material in these early pieces. A world away from the abstract, seemingly infinite-in-scope works that McKenzie created from the turn of the millennium onwards, Masturbatorium and FUCK are deliberately enclosed, built upon repetition and cycling ideas. 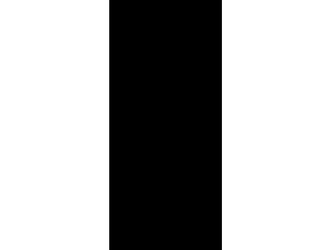 That’s particularly the case with FUCK, which is hugely repetitive to the extent that i now realise why, without visuals, i’ve always felt it to be sorely lacking. The essence of the piece is in varying juxtapositions of drones, vague shifting noises at the periphery, breathing sounds and assorted beats and pulses. As a kind of ‘anti-climax’ (in every sense) it begins very fast and powerfully, whereupon it gradually eases off and enters slightly more vague territory. The visual component is monochrome and geometric. For the stronger first part it consists of rectangles blinking at different rates, growing at first in intensity – enhanced by the lower-frequency beats sounding like an accelerating heartbeat – before slowing and subsiding; as everything becomes more mellow the visuals shift to slowly pulsating concentric circles that eventually peter out and fade. 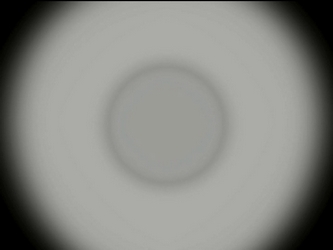 Summarising it like that is disingenuous; i found it to be mesmerising: deliberately overwhelming in its earliest stages, reinforced by the sharp edges, stark black and white, and apparently competitive nature of the rectangles, yielding to a really quite beautiful and more meditative latter half, now typified by smooth, collaborative movements, shades of grey and soft curves.

The visuals thereby act as a basic metaphor for FUCK‘s underlying sexual ideas, and it makes for a much more rewarding experience than simply listening alone. My recommendation is to ensure that the viewing space is completely blacked out, and to sit sufficiently close to the screen so that it entirely fills your field of vision. 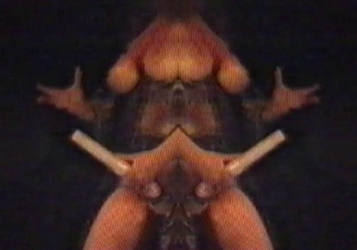 Masturbatorium opts for archive video footage of one of Sprinkle’s performances, rendered such that the right portion of the screen is a mirror image of the left. The only things that we see are Sprinkle herself and a large candelabra of flickering candles, all in a darkened space so as to emphasise that what is taking place is ritualistic. The music in Masturbatorium is far more imaginative than in FUCK, particularly in its first half, occupying an altogether more mysterious, even hypnotic mode comprising deep tones, gentle sonar-like pings and vague circling electronic sounds. In these early stages there’s a semblance of momentum in recurring fast tapping pulses, but they don’t so much convey tempo as a kind of surface crackling or electricity. Sometimes the screen is filled with candle flames, their flickering becoming an uncanny dance seemingly responding to the growing intensity of both the music and Sprinkle’s actions. 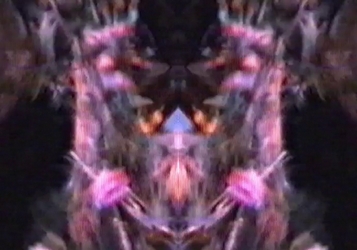 In contrast to FUCK, Masturbatorium does unfold in a conventionally climactic (again, in every sense) way, but like FUCK it’s the gradual shift in momentum – this time, accelerating – that ultimately propels this and indicates its underlying sexual motivation. In this stylised, centrally-reflected form, Sprinkle’s act of masturbation becomes something strange and remarkable, her body sometimes becoming ‘metahuman’, bringing to mind the imagined form of Hindu gods, symmetrical but with additional faces, breasts and arms (not unlike Sprinkle’s own conception of herself as ‘The Neo Sacred Prostitute‘ [NSFW]), sometimes bearing no resemblance to a human being at all, her body and robe transformed into an abstract whirl of fractalised jewels.

In its audiovisual form, Masturbatorium captures something of what it must have felt like to attend Annie Sprinkle’s performance three decades ago: honest, uninhibited and authentic – surely the truest possible kind of ritual.

Masturbatorium and FUCK are available from the Simply Superior Gumroad site; the videos contain both stereo and 5.1 surround versions. And to gain a great deal of extra insight into the background and thinking that went into these two pieces, i highly recommend the tracks ‘Prurient Food for the Moon, Slight Return‘ and ‘Avoiding the Word, but Doing It Anyway. But Much More than That. Really‘ on the album A Day of Rest Politely Interrupted for the Public Good, which features lengthy conversations with Andrew McKenzie.