Another composer who has been polishing off, smartening up and reissuing old works recently is Canadian Paul Dolden. It always surprises me how underappreciated and even unknown Dolden’s music continues to be, particularly as it’s among the most extreme stuff i’ve ever encountered (and, for good or ill, people love to get worked up by extremes), and in many respects is both sonically unique and way ahead of its time. One of the key characteristics of a lot of Dolden’s work is the creation of what we might call a ‘supra-pseudo-orchestra’ through the assembling and layering of a vast number of individually recorded instruments. At full force, the effect would surely have caused Hector Berlioz (whose never-realised ideal orchestra included well over 400 players, including 30 pianos(!)) to squirm with delight, making the climactic tuttis of Mahler seem puny by comparison. Yet one’s always aware that what we’re hearing is not, in fact, real, partly because of the sheer impossible enormity of it, but also because of the curious effect of amassing that many sounds at once, leading to a weird kind of hypercontrapuntal trammelling in which the music’s internal machinery, so to speak, seems to grind against itself and threaten to explode apart. As a consequence Dolden’s music sounds uncanny in its not-quite-but-almost-verisimilitude, dangerous in its precarious volatility, and breathtaking in the audacity of its proportions. 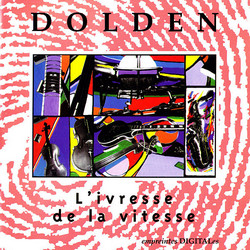 Dolden’s work is primarily represented by a series of releases on the empreintes DIGITALes label, the first of which was the double album L’ivresse de la vitesse (1994). One of the standout works on that album is the fixed media piece Beyond the Walls of Jericho. From the perspective of being reissued, this piece has had an interesting history, one that’s far from unique in Dolden’s output, and which raises important questions about the nature of ‘remastering’. Completed in 1992, the work was originally released two years later on L’ivresse de la vitesse. This album was reissued in 1999 with no changes, and then reissued again in 2003 but with the two discs now split into separate albums L’ivresse de la vitesse 1 & 2, and featuring newly-remastered versions of the music. The liner notes included a text by Dolden directly addressing this, titled Why Remaster Old Works? (which can be read here), citing the challenges of working with early technology and “compositional concerns” as the basis for the remastering. Most recently, in the last few weeks Dolden has reissued Beyond the Walls of Jericho again in another new remaster (apparently created in 2012) as part of an ongoing series of digital releases that presumably capture Dolden’s definitive take on these pieces (some of which have never before been released).

The first thing to say about this is that the word “remaster” isn’t remotely adequate to describe what’s going on here. Usually that term indicates a digitising and cleaning-up of old materials to make them as pristine as possible and then reassembling them into a new master that, in essence (and ideally), is the same as the original but showing greatly improved clarity and balance. In Dolden’s case, the process has involved compositional changes – in some cases quite considerable ones – to the actual musical material, such that to describe it as being “the same piece” is harder to justify. The 2003 and 2020 versions are therefore not really “remasters” but revised and reworked versions that fit the same general shape, narrative and demeanour as the original – we could say that that its dramaturgy is the same – but with many of its inner details and intricacies changed, altered or replaced. In essence it’s Beyond the Walls of Jericho Redux.

The second thing to say is that there shouldn’t be any perceived issue with an artist wanting to do this. The gripe about technological issues is something many composers (including myself) have made about their earliest electronic works, and the desire to get closer to the original musical intent is surely an admirable one. Of course, it’s an attitude that can run amok, and one only has to look to Pierre Boulez or, in cinema, George Lucas, to see the problems that can arise from an artist’s irresistible urge to never let go of their works and keep tinkering away under the illusion of ‘improvement’. Even that, though, is forgivable as long as – and this is utmost important – the earlier versions are still regarded as valid, and as a consequence remain available. The process of revising in this way is not at all a case of simply tweaking something like tuning up an engine so that it continues to run well. It’s a process of re-creation, recomposing a piece such that it bears considerable similarities to – and of course many of the same materials as – an earlier piece. But that act of re-creation doesn’t undo, cannot undo, the earlier act of creation. So just as, despite Lucas’ worst intentions, there is not one definitive work that we can call Star Wars but in fact a plethora of different works that all bear that name and look and sound broadly the same but are in fact quite different, so there is not one work that we can call Beyond the Walls of Jericho but three of them, all the same and all different. And i love them all. 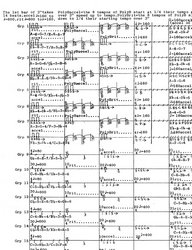 i don’t blame Dolden for returning to this piece several times. i said before about the audacity and enormity of Dolden’s supra-pseudo-orchestra and in Beyond the Walls of Jericho he pushes this to almost ludicrous extremes. That being said, it makes sense that the work should be as extreme as it is, being (originally, at least) the final part in Dolden’s ‘Walls’ trilogy, preceded by Below the Walls of Jericho (1989) and Dancing on the Walls of Jericho (1990). The title alludes to the mythical tale of Joshua and the Israelites, who were able to cause the city walls of Jericho to collapse by marching around them for six days and then blasting their trumpets. Dolden’s interest is primarily in the idea of sound as a catalytic and revolutionary act; hence why the ‘Walls’ trilogy (and above all Beyond the Walls of Jericho) is one of the most unrestrained paeans to the glory of sound that i’ve ever encountered. No – scratch that: not one the most, the most. One of the key aspects of what makes this piece everything that it is, is its willingness to disregard such conventions as clarity, balance, nuance and order. It’s music at the cusp of chaos, as if Dolden has assembled 500 players, given them a bare bones outline of what he wanted them to do and then just set them loose, recording the result. It does have a structure, it does display a sense of narrative and dramatic shape – but continually pushed to the very limits of what can be described as control, and certainly beyond the limits of clarity.

Yet – and this is one of the main reasons why i absolutely love Beyond the Walls of Jericho, in all three of its extant versions – it’s as exhilarating as it is not because we’re being swamped with mere sound but precisely because of its perilous teetering on and over the edge of clarity. Sometimes, not always, we’re able to perceive all manner of detail shifting and moving within its hugely stratified and superimposed textures, details which in turn become overwhelmed, subsumed, squashed or eroded away by the force, friction and weight of the whole. So i really don’t blame Dolden for returning to the piece and doing his best to present, as best he can, both the small-scale detail and large-scale mass contained (barely) within this piece. However, its effect is pretty consistent across all three versions of Beyond the Walls of Jericho, so at a risk of annoying the composer, i don’t actually believe Dolden has particularly ‘improved’ the piece with each iteration, though i’ve welcomed the opportunity to re-experience it, and to hear it anew again most recently has been marvellous.

i have to admit i miss the original 1992 opening of the piece, where vague and elusive hints of instruments slowly grow into an increasingly dense texture. That’s gone in both the 2003 and 2020 versions, which hit the ground running with frantically busy tuttis. There are some structural hiccups too in the 2020 version that, to me, somewhat diffuse the flow – most notably around four minutes in when everything briefly stops before the funky bass and drums start up, dissipating the energy amassed by that point; in 1992 and 2003 this progressed smoothly and maintained that energy. i have to concede, though, that Dolden has managed to increase the intensity significantly from its original form. There’s a sequence around nine minutes in, that in the earlier versions sounds darker and more mysterious; the 2003 version makes it seem as it we were entering a cave-like expanse. In the 2020 version (where it now occurs a minute later) Dolden has kept this perception while making it feel much less distant, upping the power of this strange sequence. The massive climaxes have also, somehow, been made more massive. Overload will always sound like overload, of course, yet the 2020 version lends these overdriven passages a distinct death metal quality, rather wonderfully coating the vast walls of noise in additional pulsating layers of sonic razor wire. Nonetheless, it would be wrong to suggest that the earlier versions of the work are in any way lacking in this respect; perhaps it’s more accurate to speak of different kinds of massive, in terms of quality rather than quantity.

Anyone discussing Paul Dolden’s music, particularly a work like this one, runs the risk of reaching too readily and too often for superlatives. Suffice it to say that Beyond the Walls of Jericho, in 1992, 2003 and 2020, is among the most monumental works of electronic music you’ll ever experience. It’s therefore very likely indeed to polarise listeners – but personally, i always find it utterly energising and exhilarating. My fantasy concert would definitely finish with a live version of this piece.

My recommendation is to seek out all three versions, as they each have something that the others lack. For the 1992 original you’ll need to turn to Discogs to track down a copy of the earliest releases of L’ivresse de la vitesse. The 2003 version is still readily available from empreintes DIGITALes on L’ivresse de la vitesse 2. Sadly, neither of these earlier versions is available digitally, a situation that one can only hope will change. And the new 2020 version can be had – for just a single Canadian dollar – from Paul Dolden’s Bandcamp site.