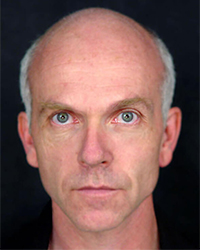 To return to the theme of reissues that i was exploring recently, another composer whose work has hitherto been languishing relatively unheard is the Canadian John Oswald. i first encountered his music around 25 years ago, at a Birmingham Symphony Hall concert where the Kronos Quartet included his astonishing electroacoustic piece Mach, which left me buzzing with excitement for weeks after, and which i’ve subsequently been hoping – so far, in vain – that i might someday encounter again. In the years since, i’ve got to know his output quite well, though in many ways i still find it among the most discombobulating stuff i’ve ever encountered.

There’s more to Oswald than just this, but a great deal of his work has been articulating a compositional approach that he initially described as ‘plunderphonic’. As the name implies, and to put it somewhat crudely, plunderphonics involves the literal plundering of extant musical materials as quotational creative building blocks – and even as i write those words i’m forced to reflect on how trivial and unproblematic that idea seems in 2020, when so much music (across so many genres) begs, borrows and steals from other music, with varying quantities of courage, openness and/or shame. Many years ago Oswald summarised his outlook in conversation with David Toop:

I was really interested in that idea of legitimate quotation, which isn’t built into the system […] You don’t have quote marks in musical notation or in recordings, for that matter. But you can annotate your sources. I tend to call the portions of things that I use Electro-quotations. The thing that’s perhaps perverse in the analogy with literature is that I’m very rarely just quoting. Although I tend not to filter or distort the sound, I transform it so much in time that it’s not just free quotation. It’s some sort of elaboration. It’s like the commentary is built in. What you usually get in journalism or literature is that the quotation doesn’t usually represent the whole essay. It’s something that’s used as a trigger point for a commentary or elaboration. In music, I think you can do those kind of things simultaneously. You can have all sorts of things happening where the quotation is recognisable as itself, even though it’s been transformed in some way. So that’s when you get into this Electro-quotation thing, when the source is still familiar. It’s Electro-quotation if you’re making an electronic quote of something and it’s  Plunderphonics if you’re screwing around with that quote.
[David Toop, Ocean of Sound, pp. 262–3]

Over the years Oswald’s work has often met with a great deal of litigious hostility due to his fondness for plundering the work of prominent pop and rock artists, resulting in much of his output lurking at the fringes of accessibility and, depending on your outlook, legality. (It would be nice to think this is an outdated issue, yet in just the last few years when Marco Ciciliani was putting together the lavish CD/book of his glorious 24-part epic Pop Wall Alphabet – each movement of which acts as a superimposition and distillation of a single pop album – he decided to avoid releasing it ‘officially’ due to the possibility of legal action resulting from copyright infringement, instead issuing it on a private basis. The apparent threat, whether real or imagined, has not yet gone away.) Until recently, almost everything that i had by Oswald in my collection had been obtained from a number of official and unofficial places on the web, but it’s an absolute delight to report that Oswald is now currently working through his back catalogue making it available via Bandcamp in pristine new reissues. 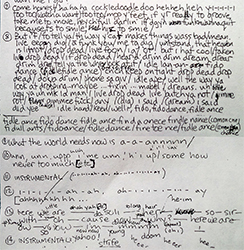 Among the earliest of these are the Mystery Tapes, which Oswald began to create in the mid-1970s. These were home-made cassette tapes with hand-written inserts that provided hints and descriptions of what was going on. The presence of these is, no doubt, a small mitigating concession due to the titular ‘mystery’ of these recordings, which each comprise a disorienting journey through an implausibly diverse welter of improbably juxtaposed cut-up slivers, morsels and slabs of recordings. The inserts thereby act as something of a navigational listening aid as well as an upfront confession of at least some of the sources to have been plundered. These tapes were subject to revision and reissue themselves, so all of them exist in a number of different iterations; the new digital reissues are of the latest versions. i’m not sure exactly how many Mystery Tapes saw light of day, but the most well-known of them (by which i mean the ones most widely-shared around the internet), Jesus Kissing in the Dark (1986), X1 and X2 (both 1987) are all among the new reissues. It’s important to stress that these reissues are not, in the usual sense of the word, remastered. Oswald described them to me as being

extensively restored from analogue tapes in a variety of conditions, and in some cases segmented for online presentation. This involves in all cases mostly unnoticed ‘remastering’ or in other words, the final polishing of a master tape to fit in a medium or a genre; and usually, a final attempt to sound better. A very few of the Mystery Tape segments have been modified (mostly ‘editing’); in which case a new version number is applied, which is a process that has been true for these xTapes since the beginning.

My reading of this is that for the most part they’re simply digital captures of the original tapes, subject to a little minor tinkering – which is entirely in keeping with the occasional tweaks and reissues that have always been characteristic of the Mystery Tapes. Considering the age and nature of these analogue sources, the sound quality is absolutely superb, though to a large degree the same can also be said of the official and unofficial mp3s that have been doing the rounds for the last couple of decades – reinforcing the fact that minimal remastering has been applied here. 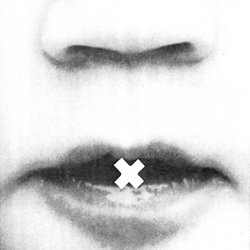 i said that the inserts to the Mystery Tapes serve as a form of navigation, but to my ear – and this applies to pretty much all of Oswald’s plunderphonic work – navigation seems to be somewhat beside the point. This is, after all, surely the ne plus ultra of music that can be described as being more than the sum of its parts. From a superficial perspective, plunderphonics might seem to be all parts and no sum – yet it doesn’t take long to realise that the opposite is true. Knowing something of the lineage and provenance is of anecdotal interest, but the more time i’ve spent with John Oswald’s output over the years, the less those details seem to matter. It’s not unlike looking through a kaleidoscope; what makes the effect so engaging aren’t all the individual motes and slivers of colour but the broader connections, collisions and patterns formed between the multiplicity of colours. As an acknowledgement of this, while the digital reissues have been divided up into short segments, they each also include the whole thing as a single uninterrupted track. In my experience it’s these that make for the best listening experience, encouraging longer-term listening scope as well as getting closer to the original (undivided) cassette format. 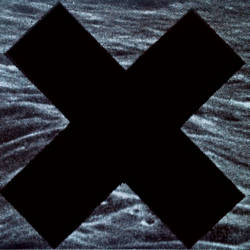 The abrupt shifts and contortions to which Oswald subjects his materials are often downright hilarious, highlighting the mischievous tone that pervades pretty much his entire output. For example, on Kissing Jesus in the Dark, a christian evangelist is punctuated by percussion fills, fittingly transforming his in(s)ane drivel into a series of punchlines, while ‘ends meet’ compiles a collection of retro stings to create three minutes of music that constantly sounds like it’s just trying to end. X1 features a rehearsal for Stravinsky’s Rite of Spring that gets hijacked by a small wind and brass group who repeat the same two-bar oom-pah phrase (to the occasional accompaniment of birdsong) for minutes on end; importantly, it’s not a loop, it’s clear that this banal fragment is literally being played again and again and again, full of little inadvertent variations and inaccuracies due to tiredness or boredom. There’s also a disconcertingly fluid rendition of ‘Jolene’, the playback speed shifting by huge amounts, causing Dolly Parton to apparently switch genders between phrases. 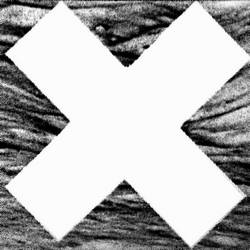 Yet mischief and humour are only a part of what Oswald is doing. i spoke before about focusing away from the track-by-track form of listening towards a broader scope, and this is reinforced by the longer sequences on the Mystery Tapes, which are less concerned with jump cuts and collage than with far more ambitious forms of assemblage. It’s in these that the humour falls away to reveal an impressive sensitivity to how seemingly incongruous materials can be brought together in such a way that the different kinds of friction, tension and sympathy they cause are nonetheless cohesive, even complementary. Some of the best examples of this occur in ‘WX2’ on Kissing Jesus in the Dark. Early on an ostensibly non sequitur collection of sources are presented – choral music, a folk jig, something Eastern, loud drums, some brass – from which a synthesis is fashioned, combining them into an uproar that sounds enormously joyous, in no small part due to how united it all seems. Some time later (around 13 minutes in), the music has shifted to an overall Indian tone but comprising multiple discrete layers, superimposed yet acting in complete sympathy with each other, forming a dreamy kind of incense-clouded sonic fug. Likewise, the 9-minute opening of X2 throws together Stravinsky with the Seven Dwarfs’ ‘Heigh-Ho’ before opening out into a beautifully still dronal expanse that only gradually allows in more active elements, including gentle percussion and tinkling chimes. It sets up an oscillation between blissful reverie and modest playfulness that’s deeply engrossing and in some respects a paradigm for the Mystery Tapes as a whole.