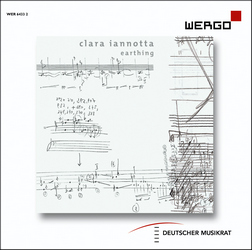 The other newly-released portrait album that’s got me thinking about polarities lately is Earthing, featuring four works for string quartet by Italian composer Clara Iannotta. The reason it provoked that particular train of thought (among many others) is due to the fact that, unlike most new music, it doesn’t so much embrace and explore polarised materials or behaviours but essentially avoids them entirely.

i’m sure this isn’t what the composer intended, but with each new listen to Earthing i’ve come to hear it more and more as a form of symphony. This perception has clearly suggested itself because of how fundamentally connected and similar these four pieces are. Of course, there are differences between them, yet what unites them is overwhelmingly more obvious and significant than what sets them apart. As such, it’s become hard not to hear them as four large-scale ‘movements’ linked by a coherent, shared musical language, with elements of overlap, recapitulation and synthesis. It may be inadvertent, but regarding Earthing as a whole there’s the definite makings of what could be interpreted as a symphonic arc.

i said that Earthing avoids polarities, and one way of elaborating that ostensibly simple (and perhaps sweeping) statement would be to say that Iannotta’s music has a certain kind of uniformity to it. It’s a complex homogeneity, where, in the same way as the four individual works combine to form a bigger whole, the four members of the quartet also become inseparable and often indistinguishable from one another. Yet that homogeneity is far too detailed to be summarised simply as ‘textural’. Quite the opposite: although this description – and first impressions – might suggest the complete opposite, it’s not the sum total of sound that holds our attention but the never-ending details and intricacies that emerge from and recede into the music’s fuzzy core.

The delicacy and microscopy of these details are crucial: a great deal of what we hear takes place within faint, narrow boundaries of action. And this is another way of elaborating Iannotta’s avoidance of polarities, inasmuch as the scope for wide varieties of contrast is massively limited due to the heavily compressed confines of its environment. Within those confines, of course, there are contrasts; as i’ve indicated there are details, there is change, but their significance is determined within an extremely diminished frame of reference, very different from what we’re accustomed to. Furthermore, most of the time there’s a distinct impression that Iannotta’s music is revealing things passively, without even trying to, perhaps reinforcing the subjectivity of what even counts as a ‘detail’ in such a rarefied, microscopic soundscape.

The reason the four pieces on Earthing suggest a refusal to embrace polarised musical materials – rather than simply a shrunk-down manifestation of them – is because they seem to be less about the emergence of their details than about an ongoing process of quietly turbulent creation. In other words, about the opposite of polarity: the liminality of sound objects; the way one thing evolves, transforms, bleeds, burns into another; the inseparability of sonic shapes and the blurring of their timbral ‘edges’. Without wishing to seem paradoxical, this makes all of those inner details i’ve highlighted both ultra important and ultra irrelevant. Important, insofar as our ear is drawn towards, gripped by, each one as it appears (sometimes erroneously) to be coming into existence; irrelevant, as each one is just a part of – almost a symptom or by-product of – a much bigger and longer-term process of behavioural agitation.

The first work on the disc, Dead Wasps in the Jam-Jar (iii), is the most delicate, and from a symphonic perspective acts as both an introduction to and paradigm of everything else that’s to follow. Glistening bands of precarious noise appearing to rise and fall; assorted traces of pitch in varying states of stability; sequences of regular scratchy surges; shining, shimmering chords floating in space. How we progress between these ideas, and where they begin and end, is usually impossible to determine. What is clear – and it’s perhaps the only thing that can be described as clear – is the sense that this is music articulating a lengthy single thing, a thing that flexes, flows, undulates and ebbs. This flexing gives the music a constant tension, suggesting the effect of extreme pressure or the tautness of a strong magnetic field.

Moving into You Crawl Over Seas of Granite the soundworld becomes more assertive, with greater implied power. It progresses from something like a quiet siren and a collection of little pitch-oriented gestures as if caught and/or turning within a thick viscous fluid to an extended creaking and croaking sequence that brings to mind the idea of something ancient awakening. One becomes especially aware of the extent to which Iannotta’s music highlights not only the physical act of music-making (all sound arising from friction), but also the physical act of listening, the mechanisms by which air vibrations cause sympathetic resonances in our ears and bodies. It invites a rare and peculiar kind of wide-eyed (wide-eared?) listening, raptly taking in each and every morsel of its tiny sonic stuff.

A Failed Entertainment is even more demonstrative, projecting loud percussive impacts, swished accents and penetrating squeaks. Due to recurrences of rhythmic chuntering (huffing, puffing, hissing) there’s a greater sense that what’s emerging from the ongoing act of turbulent creation throughout Earthing is primarily active, whereas, as i’ve suggested, in the previous two pieces one could read their sounds as almost passive, accidental sound objects. This increased agency is reinforced by further percussive plunks and quasi-bell strikes that lend the piece a faint ritualistic air, and above all an amazing, drawn-out upward creak that could hardly sound more united and deliberate.

The liminality running throughout this album is perhaps best demonstrated in the final piece, Earthing – Dead Wasps (Obituary). The opening of the work is a strange mixture of noise and pitch, simultaneously dull and glistening, not remotely static but seeming to stay in place. It opens out into one of the most breathtaking episodes on the entire disc, extending that paradoxical opening as an incredibly complex soundscape full of so many gorgeous, unfathomable and ephemeral details that the ear has to dance over and around them. None of this is remotely superficial, though; it’s not about surface at all, in fact: what we hear is multifaceted and with a distinct perspective, sounding from differing apparent distances. And Iannotta increases the liminality further: rhythmic regularity from earlier re-emerges here, the clarity of which is countered by the vagueness of its environment. This is how the piece, and Earthing, ends, positioned at this precarious point of ambiguity and certainty, a few final glistening notes ringing out in its grey void.

It’s very difficult to articulate just how wondrous and how spell-binding it all is. This is music at its most organic and (r)evolutionary: it fundamentally questions conventions of identity and contrast, narrative and drama, structure and form, individual and ensemble; it challenges the definition of a musical idea, the integrity of timbre and even the concept of music itself. Yet, somehow, despite the fact that at any point in any piece it’s practically impossible to recall how we got here, it nonetheless always seems to makes sense and be entirely right (or, at least, not wrong). To create music within such restricted confines and for it not to fall apart or become either a tedious exercise in eggshell-walking or a faux-paean to pseudo-profundity is no small achievement. The fact that it should be so completely immersive and maintain such stunning beauty, even during its most nebulous sequences, is amazing. Performed throughout to perfection by the JACK Quartet, Earthing is baffling, brilliant and utterly incredible.

Released by Wergo as the latest in their excellent Deutscher Musikrat series of portrait discs, Earthing is available on CD and download.

Another album I’d listened to a couple of times before you wrote about it with your characteristically eloquent erudition, Simon – your influence has obviously rubbed off when it comes to my own independent musical investigations…!