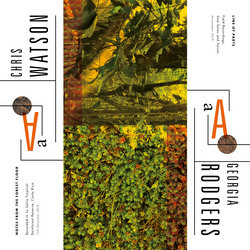 Considering it was released back in July it’s taken me far too long to get round to spending time with a split album featuring two field recording-based works by Chris Watson and Georgia Rodgers. Both works have their origins in installation pieces. Watson’s Notes from the Forest Floor began life five years ago at the ICA’s MusICA Now event ‘Exploring Sound and Authorship‘, and features recordings from the La Selva tropical rainforest reserve in Costa Rica. Rodgers’ Line of Parts was premièred at last year’s HCMF (i tried but failed to experience it personally), and combines sounds from the Cairngorms and North London with sine tones. Both pieces were originally multichannel and are presented here in new stereo versions.

It’s interesting to notice the choice of words in these two titles and their musical connotations: “notes” (pitches and rhythms), “floor” (noise floor), “line” (melody) and “parts” (polyphony). It’s an obvious thing to notice but it’s a useful reminder about the inherent musicality of field recordings. This is the only work by Rodgers that i’ve heard, but over the years i’ve been consistently impressed (and often amazed) at the way Watson transforms his recordings into new forms that are not merely more than the sum of their parts but which transcend their origins entirely. That’s true of both these pieces as well, and in this respect while it can be fun trying to guess what we’re actually hearing in them, it makes a great deal more sense to approach these sounds from a more abstract (or at least non-referential) perspective. 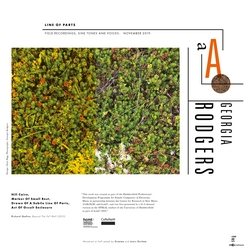 At first hearing Georgia Rodgers’ Line of Parts seems to be a simple diptych, and one where the two sections are extremely different from each other. Yet what seems to connect them is a concern with the way in which timbrally similar elements can interact to create new sonic forms and shapes. The first part focuses on impacts of raindrops falling onto metal, a simple, familiar sound but one where, over time, the timbral and dynamic differences become more and more significant, revealing an impressive sense of distance. Into this are projected an occasional rook accent or a passing plane that turns into an extended band of noise, and eventually the rain itself has evolved into the clatter of a fabulously complex bit of plunking clunking machinery. The latter half juxtaposes not impacts but sustained tones, Rodgers arranging them in a kind of slow ballet that often suggests certain intervals or even progressions that turn out to be illusory. For me, this sequence is a bit too extended for its own good but the piece as a whole is certainly highly engaging, all the more so for the bold shift between the two sections. 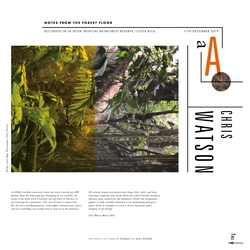 Chris Watson’s Notes from the Forest Floor is, by contrast, much more homogenous and evolutionary, and due to this (like so much of Watson’s output) sounds extremely hands-off, creatively speaking. In the same way as Simen Johan’s fantastic images portraying ostensible natural realities, it’s tempting at first to believe we’re hearing an unadulterated window onto the real world. The piece establishes an exceptionally gentle balance of elements, not only in terms of what we’re hearing but how we’re hearing them. Sometimes we’re drawn to something sonically active, yet equally there are periods when Watson just lets things sit, allowing us to savour this musical habitat as if we were actually sitting quietly inside it. The primary balance, though, is between the notes emerging from a plethora of birds and beasts – an eclectic mixture of chirps, squawks, trills, caws and rasps – and drawn-out bands and clouds of quasi-electronic sound that periodically shimmer and buzz all around them. The effect is electrifying, almost literally so, as it seems to flood the imaginary world with pulsations of power, or, alternatively, it becomes a kind of ‘reading’ of the signs of life endemic everywhere here. Where Rodgers takes pitch and noise and polarises them, Watson amalgamates them such that where each begins and ends melts away, resulting in a beautifully interpenetrating mélange of natural and unnatural sources that comes to feel almost supernatural. Time passes incredibly quickly in Notes from the Forest Floor, and as a consequence its 16-minute duration doesn’t seem remotely enough; i could happily have sat listening to more of this for an hour or more.

Released by UK label SN Variations, Notes from the Forest Floor / Line of Parts is available in digital and vinyl formats.

I did hear the Rodgers at last year’s HCMF. It provided me with my first, unforgettable experience of the the SPIRAL Studio, so it will be lovely to reacquaint myself with it…!

i’m glad you got the opportunity, Chris. i suspect the reason i failed was due to only being in Huddersfield for a few days. It’s good you felt it showed the Spiral studio in a good light – i’ve been consistently underwhelmed by hearing things in there; the idea is reasonable enough (i suppose) but as a comfortable listening space it’s hopeless.