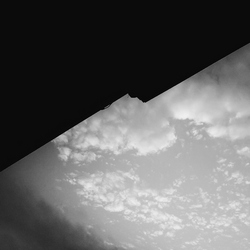 Last July, i included in my Isolation Mixtape N an excerpt from Oblivion, a 12-minute work by Vietnamese sound artist Nhung Nguyen. In its entirety it’s an impressive and strikingly beautiful piece, one that sets up an interesting relationship between its various elements. Or is it a relationship at all? Each time i’ve immersed myself in Oblivion i find myself questioning again the extent to which these elements are actually connected or simply existing in parallel.

Nguyen introduces each element one at a time. Soft reverberant tones, somewhat random but harmonically limited, setting up an ambient-like environment. Glitchy noise, a bit like trying to tune in a radio (with sporadic, very short glimpses of speech), is laid over this, followed by an additional layer of tones, but with a harder timbre, more primitive in sound and harmonically remote from the ambient pitches. Eventually an additional noise layer emerges, more gentle, evoking both the sea and the wind. This nicely-balanced quartet of elements – two noise-based, two pitch-based, each kind featuring one soft and one hard – plays out for a while, not appearing to connect to, interact with or affect each other at all. Yet there’s a palpable sense of equilibrium; though ostensibly detached, they nonetheless coexist in a way that is, perhaps inadvertently, complementary. So much so, in fact, that it feels hypnotic, the ear caught between focusing on the discrete inner details and the combined effect of them all, which really is gorgeous.

At the high point of this, a little less than five minutes in, Nguyen breaks things up a bit: chords appear and repeat, like small slivers of light coming from within, and the noise becomes more sporadic and alters its timbre, now more akin to a fine mist. It’s still the same mobile-like turning of elements, though, and it’s not until a couple of minutes later (around the mid-point of the piece) that Oblivion is pushed somewhere different. Its latter half is more overtly aqueous; everything vanishes except for sounds redolent of water going down a plughole, ushering in a liquid texture melded with a layer of rapid electronic pulses. These take over, causing the music to evolve into a kind of ‘hyper lowercase’ (if that’s not a contradiction in terms), before Nguyen stops everything and picks up again in an even deeper aquatic habitat, within which faintly hauntological traces of pitch can be glimpsed in the darkness.

Quite apart from the beguiling palette of sounds Nguyen brings together in Oblivion, it has a superb sense of structure, unafraid to be overtly hands-on in its layering, pausing and shifting, yet at the same time managing to establish within its episodes a lovely organic quality, like a chemist mixing together chemicals and then watching the reactions that take place.

Released in May 2018, Oblivion is a free download available from the Pan y Rosas Discos netlabel. More of Nguyen’s work is available from both her personal Bandcamp and Sound Awakener Bandcamp sites.