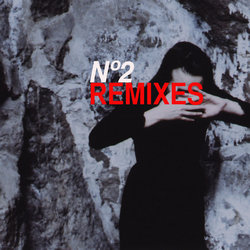 There have been numerous occasions when i’ve previously written about and celebrated the art of the remix. Remixes were an integral part of my developing musical taste and understanding at the start of, and throughout, my teens: i got into the habit of buying both the 7-inch and 12-inch versions of singles in order to compare and contrast the full range of different versions. It was then, and has remained for me since, an interesting game to play, particularly when a remixer decides to go off-piste and deviate considerably from the tone, tenor and temperament of the original.

US musician Christina Vantzou has followed up each of her (to date) four numbered albums with an accompanying release featuring a selection of remixes. The four tracks that make up Nº2 Remixes are an interesting example of this kind of more remote relationship. In fact, in the case of the first three of them, it’s difficult to make any meaningful connection to the originals, in terms of structure, melody, harmony or timbre. The general mood is broadly similar, but otherwise they essentially stand alone and apart, only nominally and notionally associated with Vantzou’s music.

i guess the obvious question immediately posed by this is: does it matter? If they’re to be treated as remixes then the game of compare and contrast is a pretty frustrating and confusing one. Yet regarded in their own right, in all cases they actually work a great deal better than the originals to which they’re supposedly connected. One of the main characteristics of the original tracks – and this applies to a great deal of Vantzou’s work – is a tendency to noodle: to move through a number of unrelated ideas with little clear sense of either identity or direction. Her music can sometimes be quite pretty, but this is undermined by its fickle and uncertain approach to both its shorter-term details and its longer-term understanding of structure. This is, i think, the main reason why the versions on Nº2 Remixes don’t really sound like remixes at all, since Vantzou’s material tends to be ephemeral, aimless and undistinctive.

All four remixes resolve these uncertainties by intensifying their focus onto a limited number of key elements and ideas, and as a consequence make for an altogether more satisfying listening experience. In general, the remixers have all moved away from the blend of acoustic and electronic used by Vantzou – featuring a small ensemble of wind, brass and strings – to focus instead on a more homogeneously electronic soundworld. Traces of instruments can be heard but they are usually fleeting and peripheral, an afterthought rather than the source of an idea. Sister by Motion Sickness of Time Travel (aka Rachel Evans) is an exception to this, retaining the cello from the original but replacing its clarinet with a much more effervescent flute. The atmosphere in Evans’ lengthy remix is created by the blurring and clashing of superimposed ideas impinging on each other. As a consequence, while its key elements continue to play out and, as far as they can, expand within this concentrated soundworld, the combined effect remains static. It’s like being locked into a single sonic object and scrutinising it while allowing it a limited range of movement; harmonies don’t so much progress as fold back on themselves to create a kind of Möbius strip-like movement. Yet despite its staticity, the track nonetheless feels light and airy throughout.

VHS by Loscil is also a great deal longer than Vantzou’s original. Again, it features a largely static environment where warm chords float and drift within a rich ambient soup, into which a melodic idea distantly appears partway through, sounding as if played on crystal glasses. A discreet bass pulse acts a bit like a distant heartbeat, grounding the nebulous music with a sense of time and tonality, without diminishing its strongly mesmeric quality. Ken Camden‘s The Magic of the Autodidact reminds me of one of the most striking remixes of Björk’s music, the ‘Girls Blouse Mix’ of Hyperballad. There, Björk’s melody is all that’s retained aside from the most rudimentary vestige of bass and just a hint of harmony. Camden creates a similarly bare bones, polarised melody / bass soundworld – though without anything recognisable from the original – in which an anonymous tune rises up and away from a slowly oscillating bassline (which, weirdly, bears a much stronger resemblance to the track Brain Fog, which comes next). Here, too, the effect is hypnotic, its simple texture made a touch more complex in its latter stages.

Only John Also Bennett‘s remix of Brain Fog retains a clear connection to the original track, featuring the slow wind and brass material from its opening, now supported by low rumbling clouds of ambience. Its development is dramatic and unexpected: a strong rising tone appears from nowhere, triggering an abrupt shift into a complex network of suspended pitches where no sounds can be clearly discerned, everything surrounded by reverberation. And just as quickly, Bennett reduces everything to just a lone oscillating double bass and traces of vocalise. These subsequently expand a little to create a becalmed atmosphere of tranquillity, slowly drifting in the distance.

The simplicity and beauty of these four tracks mitigates the fact that, almost entirely, they’re not remixes in any meaningful sense of the word. They’re therefore best approached entirely independently, on their own terms. In this sense, they’re four exquisite examples of ambient music that each find a unique way to transfix the listener.

Nº2 Remixes is available as a free download from Christina Vantzou’s Bandcamp site. And if you want to play trying to spot connections to the originals, No. 2 can also be found there.