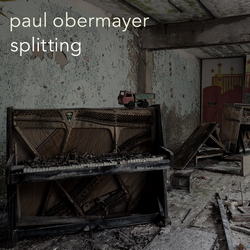 The act of listening, at its best, often seems to suggest a form of ‘inhabiting’ the music, and that’s particularly true of Splitting, a new 26-minute work by UK composer Paul Obermayer. i’ll come back to this a bit later.

It’s perhaps best to start not at the beginning but around two-thirds of the way through. At this point (17 minutes in), something happens that’s seemingly at odds with – or, at least, ostensibly unrelated to – pretty much everything else that we’ve encountered up to that point. We hear the stretched-out sound of children singing, appearing as a series of fragmented phrases. It’s a disconcerting intrusion of something tangible into the midst of what has hitherto been an engrossing, extended process of allusive but highly abstract ideas being worked through. And that word “process” is important, because not only does it literally sound like that, an active process (rather than a passive succession of arbitrary events), but in relation to this it makes the children’s voices seem like a form of exemplar that this process is possibly seeking to emulate or replicate.

From this perspective, the title, Splitting, could be read as a reference to the way acoustic sounds are broken down and analysed in order to reproduce them synthetically, digitally. As a consequence, Splitting thereby becomes a long-form, apparently real-time, artificially-intelligent effort made by the computer to sing like a child. The appearance of their voices at this late stage in the piece is like holding up the original both to see what progress has been made, and a reminder of the final objective. Suddenly, it becomes clear that the work’s opening cloud of swirling pitch was a blurred vapour trail of the children’s voices. And the extended, convoluted abstractions that followed, while they don’t overtly resemble singing in any meaningful sense, now retrospectively take on something of the quality of deconstructed (and partially reconstituted) ‘sung’ shapes and gestures, archetypal forms emanating from imaginary, abyssal vocal cords.

Because i tend to treat programme notes a bit like reading my horoscope (which i never do, and if i did i wouldn’t believe), before listening i wasn’t aware that Obermayer’s intention, alluded to in the title, was to establish a fundamental split in the music by bringing together two opposing, contrasting materials. Obermayer states that

In psychology, splitting (also called black-and-white thinking or all-or-nothing thinking) is the failure to integrate opposing/contradictory qualities into a cohesive, realistic whole.

To my ear, as i’ve described, in Splitting these supposedly opposing materials don’t necessarily sound opposing at all, establishing a complementary relationship. As such, the way that the latter material (the children) causes a retroactive reappraisal of the former (the abstract shapes) does, i would argue, create something that sounds both integrated and cohesive, or at least, comprehensible. Whether that means Obermayer failed to create a failure – or i failed to appreciate it as one – is debatable, but i hardly think it matters. The most important aspect is that these two disjunct elements are disjunct and definitely perceived as such, and the collision caused by their juxtaposition is genuinely catalytic. Perhaps it’s the result of that catalyst – resolving them or not – that’s the judgement call, saying more about the listener than anything else.

Either way, Splitting is deeply compelling listening. i said at the start about the best listening experiences involving an ‘inhabiting’ of the music. i’ve explored Splitting multiple times both through headphones and speakers, and i can testify that the headphone experience is utterly enthralling, making this perception of a bowdlerised and garbled deconstructed voice all the more telling as it seems to come from within my own head. Beyond this, the considerable delicacy in Obermayer’s approach to the material here – light years away from the reckless effluvial chaos that characterises so much of his work in the duo FURT – is a surprise and an absolute delight. The meaning, and the resolution, of Splitting might be debatable, but its beauty is beyond question.

Splitting is a digital only release, available from Paul Obermayer’s Bandcamp site.