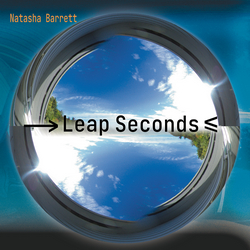 It’s always exciting when a new album of music by Natasha Barrett appears, and it feels like it’s been a long wait since her last release, the dazzling Puzzle Wood (one of my Best Albums of 2017), came out four years ago. While that album explored her earlier output – some of which had been subsequently revised – Leap Seconds focuses on Barrett’s more recent work, featuring four electronic pieces created in the last five years. Together they offer an exceptionally vivid demonstration of the unique relationship between real and synthetic sounds that typifies Barrett’s work.

To call these works ‘acousmatic’ would be, at best, to stretch the definition of that term somewhat uncomfortably. Her use of extant sounds is often abstracted to the point that our understanding of them as originating in real-world objects and phenomena is reduced to mere gestural associations: a hard impact, a rush of noise, sounds that may have begun as wood and air but may just as easily have been constructed from scratch in the computer. This becomes complicated when Barrett, as she equally often does, uses both of these sounds within soundworlds that either directly evoke or reflect upon real-world situations and contexts. However, she also doesn’t shy away from incorporating portions of field recording that, in this context, appear almost shockingly untouched and immediately identifiable. More conventional acousmatic music works as effectively as it does by striking a liminal balance between reality and artifice; Barrett at times does this, but her music goes further, in some respects embracing more fully those notions of real and artificial, her materials exhibiting extremes of abstract and concrete. Not so much a liminal as a polarised music.

A beautiful demonstration of this comes in the longest work on the album, The Weathered Piano (quattuor tempora anni), a 20-minute exploration of the four seasons. That title directly invokes the real world – both phenomena and an object – yet a great deal of its four parts evokes seasonal qualities through highly abstract sounds and textures. The opening couple of minutes of the piece, beginning in autumn, find the tangibility of a chiming clock swirling in a maelstrom of synthetic storm winds and rain, subsequently swept aside in soft electronic tones and noise. Likewise, the winter portion of the work utilises outdoor sounds within an environment unequivocally alien and artificial such they complement each other without necessarily being heard to blend or even connect. They’re essentially separate, even disjunct, elements that somehow ‘work’ together to the same end more through parallel superposition or serial juxtaposition than an attempt to make them actively cohere. It’s a bold, even a stark, way to work with sound, but the triumph of it is that the evocations Barrett conjures up in The Weathered Piano are generally far from the kind of clichéd sonic allusions one usually encounters in seasonally-inspired music. When spring and summer arrive, and Barrett’s ‘birds’ are very obviously unreal, electronic chirps and calls set within an ostensibly real backdrop of field recorded ambiance, it therefore makes total sense.

The rest of the album is generally more abstruse than this. He Slowly Fell And Transformed Into The Terrain is arguably more allusive in the sense that it reflects on the relationship between people and nature in Oslo. In practice, though, it has little to do with real-world noises, instead creating a kind of artificial reality made up of sounds derived from, evoking and emulating – very obliquely – objects we can almost identify, but which tend to sit just beyond this cusp of recognition. The piece is somewhat more gestural than the other three works, making it a somewhat less compelling, though its narrative remains nicely nebulous and the close of the work, subsiding from juddering glitches into a hovering ectoplasm of ghostly chimes, is stunningly beautiful.

Dusks Gait offers a different take on the polarisation i mentioned by presenting a welter of elements that, more overtly than in The Weathered Piano, suggest themselves as synthetic versions of the real world: water, hard/dry impacts, bells, amidst other sounds and shapes that defy this kind of suggestiveness. There’s a palpable playfulness in its subsequent treatment of texture, piling up these discrete elements to form cohesive sonic swatches – before pulling the rug on them by delicately introducing more possibly/maybe natural sounds, so low in the mix that their veracity (and even their presence) is kept nicely ambiguous. It’s the abstract that rules the day, though, culminating in a marvellous cavalcade of passing clatter, filled with tiny details that can just about be latched onto as they move past (repeated listenings reveals ever more of them).

Yet more compelling is Involuntary Expression, a work drawing on human micro-movements as the basis for animating sound within space. Though one imagines the effect of this would work best (and, perhaps, only properly) when heard in the midst of a surround speaker setup, the piece is nonetheless immensely effective in this stereo rendition. Its potency perhaps comes in part as a consequence of being less descriptively connected to tangible objects and situations. The consequence is that Involuntary Expression is much more abstract than the other works on the disc, for the most part lacking any sounds that could reasonably be described as recognisable or even referential (we could call it ‘supranatural’). Wavering pitches expand outward and obtain gas; though moving in the direction of noise, the movement of these pitches – which themselves vary in the extent to which they are focused tones or blurred noisebands) – throughout the work is crucial. Though fundamentally abstract, considering the inspiration of the work, this pitch movement brings to mind the idea of a nerve signal, each section of the piece being a slowed-down part of the journey of the signal through the nervous system, exploring the information it’s conveying. The pitches gain focus and whip wildly, causing a mixture of fluctuating and static aftermaths. There’s a real sense of power running through this, albeit implied, since for the most part Barrett keeps it restrained and contained, while hinting at the potential it could have if unleashed. The flowing pitch brings about the greatest intensity shortly before its end, unexpectedly softening into triadic warmth on arrival at its destination.

What’s especially beguiling about Involuntary Expression is its mesmeric yet elusive duality: always compelling, always out of reach; unfathomable but, somehow, understandable. In conjunction with the fascinating forms of polarised materials used to fashion these very different pieces, they make Leap Seconds a superb testament to Natasha Barrett’s uniquely fantastical musical language, glorious sonic paradoxes rooted in the world and the imagination, redolent of everywhere and nowhere.

Released on CD by Sargasso, purchasers of the CD also receive digital files containing binaural versions of all four works. In general, i’ve found most of the pieces more effective in their regular stereo versions through speakers – thereby filling the listening space similar to the way they do when heard in the concert environment – but Involuntary Expression works best, and is really wonderfully impressive, in its binaural form.