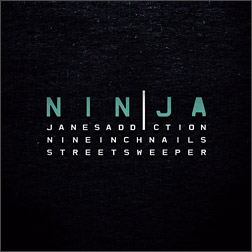 Almost a year on from their last tour EP, there’s now a new 6-track EP from Nine Inch Nails, together with their tour buddies, Jane’s Addiction and Streetsweeper (the new project from Rage Against The Machine’s Tom Morello). Titled the NINJA 2009 Tour Sampler EP, it features two tracks from each artist and, considering the quite different styles of each act, hangs together surprisingly well.

Jane’s Addiction contribute first, with “Chip Away”, a wild, pounding, tribalesque track that never lets up for a second, even during a momentary shift to hand-claps and rim shots. They pick up their instruments for “Whores”, a fairly formulaic rock number that is, nonetheless, pretty compelling.

NIN’s “Not So Pretty Now” clearly comes from the sonically anæmic With Teeth era; despite being an exciting track, it’s predictable and not one of Trent’s finest achievements (which of course means it’s in keeping with With Teeth). “Non Entity”, on the other hand, is superb; the tempo is sluggish but somehow driving, and as the textures develop, the song seems to be a perfect synthesis of ideas from numerous NIN releases, including Ghosts. It’s the best track on the EP.

This is my first contact with Streetsweeper, and based on this evidence, will probably be my last. This brand of rap rock is all posture and no substance; “Clap for the Killers” jabbers away over a single riff for four minutes, whereas “The Oath” starts interestingly but quickly descends into the same kind of empty swagger. i hope they’re more engaging when performing live (they’ll be opening for NIN/JA from May) as here they really are extremely dull, and actually slightly comic; to be avoided.

The EP is available in four formats, mp3 (320Kbps), FLAC, Apple Lossless and—redundantly, on this occasion, as it’s simply 16/44.1kHz—WAV. Only the mp3 version is a straight download, the other three, as on previous occasions, all come via torrents; all four contain the six tracks and artwork (plus an apparently meaningless file titled “Icon” that is precisely 0 bytes in size and causes WinRar to hiccough when it meets it!). To download the EP, start here.