When worlds collide: the dazzling, bi-polar explorations of Hecq’s Steeltongued

It’s perhaps not too fanciful to say that music today has two ‘poles’: one characterised by the presence of beats (in whatever form), the other by their absence. Occupying each end of an impossibly wide continuum, these poles have both had their creative bars set extremely high, from the intricate, rhythmically irregular convulsions of Ryoji Ikeda and Autechre to the lush, elliptical driftscapes of Aphex Twin and Biosphere. Aesthetically, there would appear to be a infinitude of differences between the two—they could even, in fact, be called opposites—and it’s no doubt a symptom of this that most artists are emphatically one or the other; i did, after all, describe them as ‘poles’, and indeed the decision of whether or not an emphasised pulse is to be a feature of an album is arguably one of the most fundamental, even defining decisions for any musician. It’s not surprising, therefore, that examples of artists combining these contrary poles in their work are rare. Alva Noto’s collaborations with Ryuichi Sakamoto (particularly Insen) bring skittering glitched beats into a softly drifting context; Aphex Twin’s career has visited both poles, although never within a single album; and most recently, Autechre’s Quaristice project saw them to some extent attempting to forge a synthesis of the two. The attempt to combine pulsed and unpulsed musics would seem to be akin to pouring oil into water; the two can sit happily together, but never actually blend. Often, the result becomes a kind of aural illusion, the listener able to focus on one element or the other, but never both at once, suggesting some kind of fundamental incongruity. That is, until now.

For six years, and as many albums, sound artist Ben Lukas Boysen, better known as Hecq, has focused on beats, creating in my view some of the very best beat-oriented music ever made (if anyone does, Hecq puts the ‘I’ in IDM)—A Dried Youth must rank as one of the most assured, successful debut albums by any artist. But from his second album (2004’s Scatterheart) onward, on tracks such as “Madison I” and “Midnight Generator”, he began significantly to deviate away from the glitching pulses into more amorphous territory, digitally stained ambient miniatures that do not simply sit cheek by jowl with the beats, but surround, penetrate and interconnect them, bonding the album together like electronic glue. Subsequent albums Bad Karma and 0000 continued to drop hints at Hecq’s ambient interest, hints that were abruptly writ large in last year’s Night Falls. Unexpectedly—and quite courageously—the album is almost entirely absent of beats, occupied by generously-sized quasi-watercolours, their canvases daubed in nocturnal ambient hues, at times (“Nightfalls”, “Red Sky”) touching on orchestral and choral textures. Sonically dark it may be, but laden with a profound and joyous light, the album was a clear statement of intent from Hecq, an assertion of the importance and value of beat-absent music in his output; and above all, it posed the tantalising question: what next? 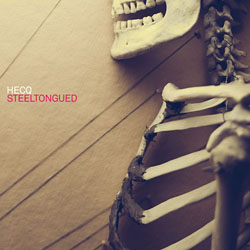 The answer came at the end of last month: Steeltongued, and with it conclusive, dazzling proof that these disparate poles of pulse and drift can not merely be juxtaposed, but sympathetically and successfully combined. The album finds Hecq reinventing himself at every point, forging a synthesis not only of solid beats and fluid ambience, but also of his entire output to date. At first, it seems deliberately polarised: opening track “Spires Awake” is an elliptical, slowly swelling maelstrom of ambient noise, heavy but beautiful, which is immediately followed by “Typhon”, an abrupt shift into percussive jitters and hiccups. Although powerfully engaging, both tracks lead precisely nowhere, and come across as raw materials, as though Hecq was presenting his sources before getting to work on them. “The Descent (with Nebulo)” resumes the ambient mood in another weighty crescendo, within which a number of pulse-like sounds and gestures flit like so many will-o’-the-wisps; suddenly, the accumulative weight is lifted, and the track begins its real descent into a murky bass tapestry, its drones punctuated by muted chimes, like a buoy out on the sea at night. Whereupon comes the title track and the beats restart, sounding like a plethora of balls bouncing on a drum kit in all directions. The beats follow their own insistent logic, thwacking out umpteen permutations while—for the first time—Hecq tentatively surrounds them in velvety ambience. The sense of polarisation is lost; the warm sound washes give definition and context to the beats, gently blunting their sharpest impacts, absorbing the bangs and crashes that fly out like shards of glass falling on cotton wool. If anything, it highlights the difference between the two, but then, apparently effortlessly, demonstrates how to unite them. “I Will Survive” begins dominated by the unflattering rambling of Nongenetic, a seemingly incongruous choice (although i can’t imagine any vocalist sounding appropriate), although Hecq doesn’t allow him to take centre-stage for long, and as his words fade, it becomes clear just how impressively complex is the texture Hecq has created underneath. Once again, the frantic glitching beat pyrotechnics have been seamlessly joined with a rich, ambient chaconne, occasionally scorched with noise. The track seems to last way longer than its mere 5-minute duration, all the more surprising as its final quarter is entirely beat-free, the frantic rhythms collapsing from exhaustion. Ignore the vocals and pay attention to what lies beneath; it’s extremely impressive.

“Dfrm” is an essay in glitchcore, and Hecq’s invention here is nothing short of astounding: rhythms everywhere but not a pulse in sight, their solidity made elastic in his hands. Less irregular but more pounding is “Untitled (BK Remix)”, once again folding ambient into the mixture. A drone gently underpins the activity, forming a resonating backdrop to the staccato surface beats; like “I Will Survive”, the beats subside towards the end, allowing the warm washes of sound to fade the track into the ether. It’s followed by the least interesting piece, “Frost”, a stodgy, cycling slice of crumbling chords heavily swamped with reverb; it’s a bit too much like William Basinski, and feels a touch out of place here. “Howler”, too, for all its brilliance (and it is brilliant), is a foray into the kind of breakcore territory (complete with Amen break, shattered into a myriad of fragments) of which Aaron Funk is master. The track seems to burn itself out relatively quickly, and without the irregularity of Funk, it’s breathlessly exhilarating, but doesn’t quite live up to the quality of the rest of the album.

The remainder of the album takes the form of a 27-minute extended coda, under the overall title “Hypnos”—a fitting title, as the music is constructed as a piece of ambient drone, reminiscent of some of Robert Rich’s work. Part I, subtitled “Distant Fires”, is delicate and restrained, crescendoing cautiously, pulse-free but hovering, rather than drifting. There’s just a hint of noise at the fringes, and the deep bass registers are used only sparingly, occasionally tolling out deep notes, aiding the fixed, hypnotic quality of this opening movement. At its conclusion, segueing into the second part (“Lost For Words”), the body of sound abruptly drops in intensity and falls in pitch, exposing these bass notes in a gorgeous, velvety texture worthy of the very best Lustmord. A soft harmonic oscillation is set up, upon which fall high droplets of piano, whereafter the bass coalesces into a languid pulse; once again, the overall title is fitting: the combination of sounds is an opulent, heady mixture, like an aural cloud of incense. The final, longest part, simply subtitled “Hypnos”, begins bereft of bass altogether, the piano fragments echoing freely. But a heavy, slightly rough drone quickly fades in, enveloping them, seemingly inactive but its surface bristling with activity. Minute percussive elements skitter momentarily across it, and string-like figurations attempt to predominate, while the drone itself becomes increasingly muscular, flexing and pulsing, overtones glimpsed here and there. Towards the end, a distant bell rings out, and the music gradually dissipates.

Pulsed or unpulsed, all of this music is nonetheless pulsive, compelling, illuminating and often staggeringly beautiful. The album is a 2-CD release, similar to 0000 in that the second disc is devoted to reworkings (‘remixes’ isn’t really suitable here) of the title track. i won’t get into them now, but those by Tobias Lilja, Si Begg and Ultre Steal Tongues are the best. On Steeltongued, Hecq has shown what marvels can happen when worlds collide; his bi-polar explorations are genuinely pioneering, making this an essential purchase for lovers of beats and ambient alike. i have no doubt that it will turn out to be one of the very best albums of 2009.

Fantastic read,Mr. Cummings. I agree Hecq is an amazing artist but somehow has been off the radar.

Allow me a suggestion. Go to SputnikMusic.com, create an account and post this review/essay. Believe it or not, there isn't any for Hecq yet on there. I've thought of writing one for this album myself, but I cannot top yours. Please think about it.

In any case, I enjoyed reading. Cheers!

[…] in his hands. In many ways, he has to draw comparisons with Hecq (another Ben, about whom i wrote here), flitting as he also does between the crystalline intricacies of IDM and the warm shroud of […]