Melodies from a quixotic ringmaster: Get Well Soon – Vexations 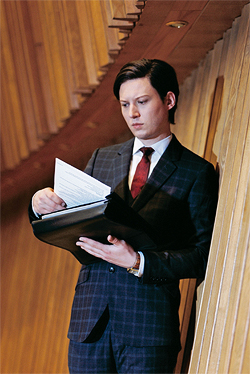 If you were to combine the chamber pop trappings of Belle and Sebastian, the song-writing inventiveness (but not the sarcasm) of The Divine Comedy and top it off with the vocal stylings of Thom Yorke, the result might start to resemble Get Well Soon. The man behind this quixotic project is Konstantin Gropper, a classically-trained songwriter who’s been lurking in the wings from as far back as 2005, but in the last couple of years has begun to demonstrate in increasingly powerful fashion the weight and intensity of his musical imagination. 2008 brought two impressive releases, the kaleidoscopic album Rest Now, Weary Head! You Will Get Well Soon—which took three years to make, and threw together a courageously wide range of sources and manners, yet somehow found a way to make them all gel—and the outstanding Songs Against The Glaciation EP, an epic rollocking ode to life on the sea, picked out in songs that veer between soft, sublime delicacy and more hectic, rock-out gestures. Gropper’s vocals—treading a confident path between emphatic assertion and languid drawl—bring to these disparate sonic collisions a unifying force, like the ringmaster of a potentially unruly circus. But, surprisingly, that doesn’t mean he dominates the proceedings; in some songs, indeed, his contributions feel extremely succinct, stating their case briefly, allowing the instruments both to prefigure and extend his thoughts.

In the intervening brace of years, Gropper has clearly been busy honing his craft, and this is thrillingly realised throughout his second album, Vexations, released in late January. Despite being as concise as ever, each Get Well Soon song seems to cram an inconceivable amount of adventure and interest into their roughly four-minute spans. Album opener “Nausea” (yes, a Sartre reference) is a beatless prelude that sets a literary tone from the outset, “It was a bright and beautiful morning in spring. I just went out in the forest to collect some wood for the fire, when I stumbled upon this strangely formed root…”. We’re given no time to absorb this Jackanory moment, as busy, swirling harps, drenched in reverb, transport us away from the twittering birds and smells of the outdoors to somewhere very much more interior, somewhere still and dark. The track continues as a restrained lament, voice and strings, with an element of Burt Bacharach never far away—except, of course, this is no easy listening; beneath their highly engaging, ostensibly whimsical surface, Gropper’s songs are never as they seem. 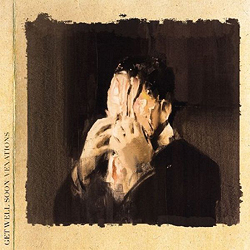 More harp flourishes usher in “Seneca’s Silence”, referencing another philosopher, he who was forced to commit suicide publicly by emperor Nero for his supposed involvement in a conspiracy. Seneca’s deep interest in human life and fulfilment is immediately apparent in the titles of his works, such as On consolation, On the shortness of life, On tranquility of mind and, perhaps most importantly, On the happy life. Gropper has stated that “they could be the album’s subtitles”, and that, beyond this, Seneca’s life and writings were a central influence on the album; certainly the sense of peering deeply into the more difficult depths of our lives is obviously central on Vexations. All the same, this kind of depth doesn’t prevent the songs—particularly “Seneca’s Silence”—from having a lightness of touch as well as, definitely the case here, an anthemic quality that encourages mass singing up to the rafters.

“We Are Free” is about as close as Gropper has got to Belle and Sebastian’s brand of plinky-plonk melancholia (complete with child-like “dum dum dum” triads in the chorus), albeit festooned with numerous other suggestions, such as a 60s dulcimer tremolando at the start, and some trumpet motifs that wouldn’t be out of place in a Sergio Leone western (or, at least, a Tarantino pastiche of one). It’s precisely this kind of eclecticism that makes each song such a rich delicacy, which no doubt explains in part why Gropper firmly keeps their durations as short as they are. The innocuously-titled “Red Nose Day”, a gently lyrical lilt, is dogged early on by an unsettlingly soft-but-sharp chord cluster bobbing nearby; it’s shaken off easily enough, but ultimately proves somewhat prescient as the song later descends into ominous rumbles and plaintive trumpet dissonances. Trumpets also reign supreme in the following “5 Steps / 7 Swords”, which is all paradox, affecting the manner of a lumbering dance, its allusions to baroque sequences sitting awkwardly atop its heavy-laden, acerbic mood. Being succeeded by a one-minute ambient interlude, laden with mournful handbells, only makes more emphatic the uncanny world in which Get Well Soon’s music is set.

It also triggers a steady retreat into softer, slower music, in the process proving that, for all his exciting invention, Gropper is above all a supreme melody maker. These are songs that really do sing, their melodies unfurling to become the perfect vehicle for his deeply pensive lyrics. “A Voice in the Louvre” is a case in point, the middle song on the album and also its lyrical highpoint, Gropper’s voice close-miced and underpinned by empathetically simple, beautiful harmonies. Through “Werner Herzog Gets Shot” to “That Love” brings the album almost to a standstill, its sedate waltzing sounding like the last number in a club at 2 in the morning. It picks over its thoughts in similarly late-night, blurry fashion, the repeated claims that “we will last” seemingly at odds with the accusation, “where was that love when we needed it most?”. The spectre of Thom Yorke (indeed, all of Radiohead) is strikingly manifest in “Aureate!” (a fabulous word, meaning to cover with gold); the textures here are exquisitely put together, dipping into rock territory at the choruses, while the verses occupy a rather more elevated plane; and the wonky brass conclusion is a master stroke.

A new allusion appears in “We Are Ghosts”, with the kind of group-chanted refrain that Matt Johnson employed to such good effect with The The. After which, in yet another musical non-sequitur, “A Burial at Sea” places a primitive drum machine beneath steel drum tremolos; Get Well Soon’s colour pallette is seemingly boundless, characterising each song in a totally unique way. Gropper now sounds like a cross between Nick Cave and Steven Wilson, singing with more of a sneer than before, and in a lower register. “Angry Young Man” has a brilliant false start, its grungy opening gestures promising a punk onslaught, but abruptly collapses into an amorphous haze of chords that lead to the song proper. Now it’s The Divine Comedy meets The Cure, with (again) Thom Yorke singing, and another highlight of the album; it’s also another example of a well-worn Get Well Soon technique, the melodies moving relatively slowly (often with a halting delivery) while the underscore drives along at a rapid pace. It doesn’t quite achieve the anthemic quality of “Seneca’s Silence” (the tune’s too low, for one thing), but that’s clearly not its purpose, proven as the tempo abruptly crunches to a stop, plunging the song into a strange, haunting coda, punctuated with a sepia piano, akin to muted bells. Vexations is brought to a close with the hushed epic “We Are The Roman Empire”, which progresses with the haste of a funeral cortege, while the lyrics bespeak the album’s first significantly positive statements, “You don’t have to fear … We’ll fight it all”. Decorated with quiet percussive filigree (sounding towards the end like an offstage gamelan), despite its sotto voce restraint, it’s arguably Vexations‘ most potent moment, achingly beautiful and genuinely poignant.

So much for the “difficult second album”; Konstantin Gropper’s muse is firmly in residence, and one can only hope that Get Well Soon achieve their highly deserved wider recognition before long. In mentioning other artists, i don’t want to suggest in any way a kind of music that is ostentatiously knowing, referencing its sources with its tongue in its cheek and a chip on its shoulder. Neil Hannon has fallen into that trap on far too many occasions, but Konstantin Gropper never does; his is an inspiring, utterly individual, creative mind, and his songs are outstanding and revelatory. Strongly recommended.

[…] of which are worthy of a lengthy discussion in their own right. i wrote at length about this album back in March, and my views have, if anything, intensified; ever serious but always accessible, Gropper’s […]