How To Destroy Angels: music on a magic carpet, but not elevating 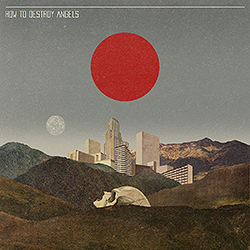 Trent Reznor’s side project How To Destroy Angels—formed with Year Zero/Ghosts henchman Atticus Ross, with Reznor’s wife, the impossibly-named Mariqueen Maandig, as vocalist—has released its first EP today. It’s a 6-track self-titled affair, lasting a little under 35 minutes, and it’s tempting to start drawing comparisons with Nine Inch Nails, rather than face the music on its own terms. But, having said that, i wonder how possible it is to distance oneself from NIN, and not merely through Reznor’s and Ross’ involvement. While Reznor’s voice is arguably the sine qua non in the multi-faceted NIN project, there’s now a sizeable body of NIN material that is instrumental (most notably Ghosts, of course, as well as numerous other tracks, especially on Still), so there’s something of an established ‘non-Reznor’ NIN soundworld. To some extent, first impressions would seem to declare that How To Destroy Angels’ first EP is a cluster of tracks directly from that soundworld, with Mariqueen Maandig simply placed on top (and the style and form of the lyrics is decidedly NIN-like). This isn’t meant as any disrespect to Maandig, who sounds entirely right in this context, although that might have something to do with the fact that she’s not, yet, taken her voice into territory more demanding than chesty whisperings and husky half-utterances. To be blunt, she seems in every way borne aloft on the textures created for her by Ross and Reznor; and while it may be an exhilarating magic carpet ride for her, it’s not quite so elevating an experience for us.

The closest she comes to something dramatic is in the opening track “The Space in Between”, which is also the best track on the EP. The chorus briefly allows her to show us that she can in fact sing, given half a chance, although even here, she’s massively enveloped in the deeply ominous, intensifying music around her. While this song bodes well for the future, the rest i’m not so sure about. “Parasite” takes a more anæmic approach (sounding like an outtake from With Teeth), although it introduces a rather refreshing harshness later on, while “Fur Lined” opts initially for retro stylings, filtering the hell out of Maandig’s vocals, rendering her like one of the Borrowers emanating from a broken transistor radio. Her voice is way too low in the mix, the analogue synths buzzkilling each and every one of her attempts to take the melody into higher and more interesting areas. i was embarrassed to find myself thinking of (of all things) Justin Timberlake’s “Sexyback” while listening to “BBB”; the letters refer to the “big black boots” of the lyrics, but beyond this i have no idea what to make of this weird little track—what is it trying to do or be? i rather like “The Believers”, as it has a nice contrast between Maandig’s smooth, slow-moving vocals and the incessantly busy, nervous constructions that surround her. For a change, she’s in control (just), and the song is all the better for it. And finally, “A Drowning”, a lovely song but one that would benefit greatly from the melody being allowed to grow in stature as it progresses; the lyrics almost demand it: “I’m drowning here/please anyone/I don’t think I can save myself”—does it make any sense, and is she really content, simply to murmur lines like these? It’s as though the group feels that any urgency, any rough edges at all, need to be the occupation of the (for want of a better term) ‘accompanying’ music and not the vocals, ultimately relegating Maandig to a role that’s, by contrast, too polite for its own good.

i was keen not even to mention Nine Inch Nails in this article, but the music has made that impossible; this first EP fails to demonstrate any significant attempt to craft a music that either charts a path different from that of NIN, or that gives Mariqueen Maandig a worthwhile contribution to the enterprise. Trent Reznor could just as easily have delivered all these lyrics himself, and the result wouldn’t have been that different from what we have (in some cases, it may even have been better). If How To Destroy Angels is going to amount to anything (and for me, there’s no guarantee of that, based on this EP), it needs some new ideas, ones that are entirely its own. “The Space in Between” goes some way to prove that that’s possible.

As is Reznor’s wont these days, the 6-track EP is available here as a free digital download, if you really are content with 320Kbps mp3 (and why would you be?). For those with ears, high-resolution audio (Apple Lossless, FLAC and 24-bit WAV) can be obtained for a mere $2.