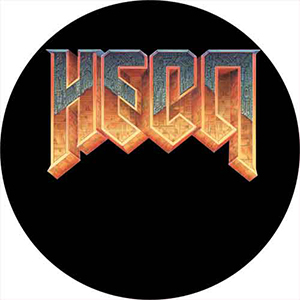 Despite claiming, a little over a year ago, that “the whole beat-science cant go any further for me”, Hecq has unleashed a new EP, Sura, that is a ferocious take on dubstep. Far from turning his back on beats after Steeltongued, Hecq positively bombards the ears with them, barely held in check by—as ever—his trademark ambience.

This is not the familiar shambling, lackadaisical dubstep, however; the title track is thrown into existence amidst a plethora of relentless high-hats that propel the material on. It’s over this, like a warm liquid, that Hecq’s slow chaconne builds in substance, easily swallowing these opening beat-gestures. Everything subsides, and then, literally, explodes, shards of white-hot rhythms cascading outwards as if from a welding iron. The track then, essentially, goes through the motions a second time; the chaconne briefly re-emerges, distant and hauntological, and with even more violence the metallic beats resume their onslaught. 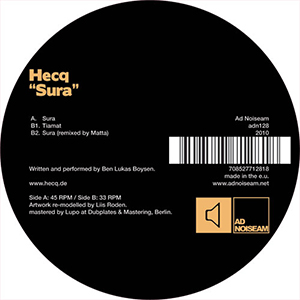 Pace is reduced yet further in Matta’s deft remix of “Sura”, its beats turned to granite, grinding forward like a kaleidoscopic monolith. However, the frenetic energy of Hecq’s original is wildly evident; if anything, we appear to be viewing the fundamentally slow tempo (the archetypal dubstep shuffle) beneath a microscope, each beat surrounded and peppered with a myriad fragments, gestures and motifs. The chaconne is largely subjugated by all this, although in being pushed to the periphery seems almost to grow in stature (especially during the brief glimpse offered halfway through), as though it defined the limits of this sonic world.

Sura is a thrilling, exhilarating EP, released through Ad Noiseam as a 12-inch single (with bonus poster, featuring the amusing Doom-based artwork); they also offer an mp3 digital download, but for those who want to enjoy this properly, head over to Juno Download for FLAC.