The Proms season is upon us once again, bringing with it the lively hope of new commissions and world premières. However, a cursory glance at the concert season makes for rather damp reading, the commissions going to an unadventurous gaggle including Mark-Anthony Turnage, David Matthews, Graham Fitkin, Jonathan Dove and Huw Watkins. That being said, new works from Robin Holloway, Tansy Davies and Tarik O’Regan should make for more interesting listening, along with UK premières from Gunther Schuller, Simon Holt, James Dillon and Bent Sørensen. If time allows, each new work and other concerts of note will be covered here on 5:4, together with a recording of the performance. First up is Gunther Schuller next Tuesday. 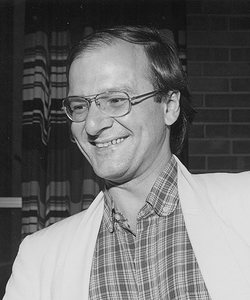 Meanwhile, here’s one of the highlights from last year’s Proms season, and a work by a favourite composer of mine, Claude Vivier. It’s the UK première of his Orion, a work that emerged following the composer’s extensive trip to the far east. With a title like Orion, it’s rather too easy to reach for an adjective like ‘cosmic’, but that word absolutely applies; its 13-minute duration has a broadness of scope that is remarkable and highly evocative. While other composers are sporadically brought to mind (Takemitsu, Messiaen, even a hint of Varése here and there), Vivier’s sound-world – as ever – is entirely his own, and it’s a ravishing, exquisite sound-world indeed, which makes it all the more surprising that his work persists in being so unknown. Admittedly, there are layers of obtusity in Vivier’s structures and textures that, for all their superficial beauty, can cause one to feel a little uncertain, even lost. But i for one am content to be taken into uncharted waters by one such as Vivier; it’s music worth a bit of trust and effort.

The UK première of Orion was given by the Royal Philharmonic Orchestra conducted by Charles Dutoit.

A melody on the trumpet, again the trumpet, as in Kopernikus, instrument of death in the Middle Ages (see the film by Bergman and read l’Office des morts)
Inevetably, this melody is cast upon itself without being able (wanting) to smash the wall of solitude.
Blissful destruction-the euphoria of egocentric despair. Beauty, pure Beauty, sad Beauty, cosmetic beauty, lacquered or wild beauty, monstrous and sexual.
Stop!
I begin again.
Orion is the name of a constellation; I have always turned it upside down-have always looked toward the east-stop! too personal. I was just about to speak of my mother.
Third start.
Orion consists of six sections: statement of the melody, first development of the melody unravelling on itself, second development of the melody unravelling on itself, meditation on the melody, remembrance of the melody, and finally the melody in two parts.
Eternal homecoming, as in history with a capital H, which always waits impatiently for the return of its redemtive saints and its dictators. I have the impression that I’m standing around in a plane; I remain in the same place and yet I go from Cairo to Kuala Lumpur.
Go and find out for yourself!