At tonight’s Proms, almost a year-and-a-half after its world première, Gunther Schuller‘s Where the Word Ends finally found its way to England. It came in the hands of the splendid WDR Symphony Orchestra Cologne, under the direction of Semyon Bychkov, in his farewell concert with the orchestra he’s faithfully served for nigh on 15 years. 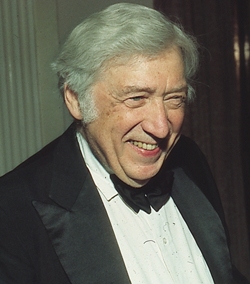 One never quite knows what to expect from Schuller, but his works rarely disappoint. Where the Word Ends was no exception, being one of the most lush and exhilarating new orchestral pieces i’ve heard in a long time. Cast in four seamless movements, Schuller has packed the piece with the range and variety of material one might expect in a symphonic poem. In fact, it’s rather tempting to describe it simplistically as having “something for everyone”, although its progress from brash, modernistic ebullience to delicate lyricism is convincing and subtle. Moreover, the whole thing somehow holds together and makes sense, although my ear found itself recoiling from one or two moments that sounded like so much generic contemporary music (or do i mean generic English contemporary music?). They were only moments, though; Gunther Schuller’s 25-minute span forms an object ever in flux, ultimately dragging the listener through the most vivid, exciting sonic landscape.

So, the bar’s been set pretty high; it’ll be interesting to see how the forthcoming premières compare (or contrast).