This year’s Proms has already had a couple of concerto premières, and the third, from Bent Sørensen, is one for piano and orchestra. Inspiration for the work, La mattina (Piano Concerto No. 2) is in part connected to Mozart, and Sørensen has opted for an orchestra of like size (no clarinets or heavy brass); while the piece is stated to have five movements, the transitions between them are difficult to discern, and it comes across more simply as an episodic, single-movement.

It begins, as the score stipulates, “slowly, lugubriously”, a dark velvety chorale picked out by the soloist, with the barest of traces of a held note in the upper strings. For some time, the rest of the orchestra hides in the shadows, content simply to lurk at the fringes of the pianist’s (in every sense) deep music. Only when the piano stops do they begin to stir with more intent, high and uncertain, as though feeling their way outward. The piano’s return, more demonstrative than before, encourages them to remain, and the combined forces briefly step outside their comfort zone on a bed of sharp accents and sporadic glissandi. Wild scales on the piano signal a more exploratory few moments, simple but hectic, that abruptly cease, whereupon claves—a significant instrument in La mattina—are first heard. This seems to stir things up a bit, provoking loud strummings on the strings, which in turn leads to an even greater burst of clave activity (Sørensen directs all the players to double on claves). The music briefly becomes surly, and in a magical moment, members of the orchestra hum in unison as an extremely high violin gently meanders, a glimpse of something ‘other’. The piano takes a turn for the conventional, glittering around familiar figurations (at first agitating the claves) that halt as suddenly as they began. 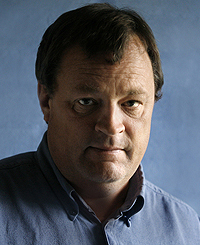 A brief pause, a cor anglais suggests a melody, and then the instruments, as one, seem to part, considerable space now permeating the material. The orchestra assumes more of an accompaniment rôle, the soloist placed firmly in the foreground; initial short remarks and warm hums in the orchestra give way to larger and richer contributions. Everything oscillates more wildly than before between extremes of dynamic, the softest moments made more tantilising by half-heard col legno strikes. None of which lasts long; all seems impelled to move toward faster, energised music: a scherzo of sorts, the pianist cutting a quasi-tonal rug over the keyboard, the whole often resembling a 21st century take on Grieg’s piano concerto. Finally, the pianist softly reminisces its opening material (perhaps it wanted it to return as badly as i did), while the orchestra playfully flies up into the ether.

For all its considerable twists and turns, i never found myself really drawn into this piece; its language is rich and fertile, potentially inviting, but the continual forays into neo-Romantic acrobatics sound cheap and are highly off-putting, seeming only to make the piece more confusing than engaging. Sørensen’s most striking passages are the ravishing, deeply introspective opening piano solo, and the spacious, glacial pianissimo passages; it’s disappointing that he ended up ultimately being drawn down such a superficial and stylistically well-trodden path.