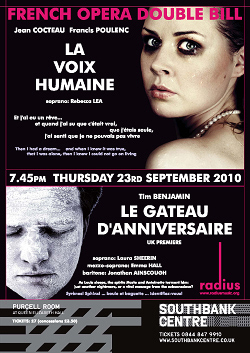 Last Thursday i journeyed to London for a small-scale concert at the Purcell Room. On paper, the concert was being given by the ensemble Radius, but in practice only the pianist was present, supporting a quartet of singers. i’ll admit to being disappointed about that; i’ve not encountered Radius before, so it was frustrating to come away still having not encountered them. Two pieces were performed: Poulenc’s one-act opera La Voix Humaine preceded by the UK première of a new work by Radius’ director Tim Benjamin titled Le Gâteau d’Anniversaire.

Benjamin’s work can’t, in any accurate sense, be called an opera, comprising a single scene of barely 30 minutes’ duration. What Benjamin has produced, in fact, is akin more to a dramatic scena, except that it’s intended to be funny, so i guess we should rightly call it a dramatic scena buffa (or something like that). What unfolds is a dream sequence in which the protagonist, Louis, a baker by trade, receives visions from a pair of women who, at length, coax, encourage and downright insist that the reluctant Louis disregard bread-making for a time and bake them a cake. In the epilogue, Louis is awakened by his sisters, only to be reminded it’s their birthday, and that he’d agreed to provide his services to mark the occasion; no resistance from Louis this time, and the preparations begin. That’s it; except that Tim Benjamin’s lengthy programme note expounds the notion that the work is a “theatrical investigation” into “the oppression of, and liberation from, accepted convention and custom” as well as “the power of the subconscious to influence the conscious self through the medium of dreams”. Freud and Jung are name-checked, and it’s abundantly clear Benjamin has some fairly thought-provoking stuff in mind here, despite the comic presentation. One can’t help feeling he’s over-doing it, though; it’s true that Louis’s protracted dream sequence both turns the world on its head and takes it to extremes—Louis is implacably opposed to the suggestion of baking (or, indeed, thinking about) anything other than bread, and his sisters have become transformed into an unrecognisable pair of malevolent sirens—but that’s about it. One of the sisters states in the epilogue that Louis had agreed to bake a cake for the occasion anyway, so far from than the dream influencing the subsequent behaviour, it rather seems the other way around; perhaps Louis, in his subconscious, didn’t actually want to bake the cake—but come on, this is soap opera stuff, not deep, and certainly not as thought-provoking as Benjamin clearly want it to be.

So much for the concept; the music, less aspirational, was more engaging. Within about 10 minutes, it became clear that the pianist was simply not going to stop—ever. One can see some sense in this; in dreams, nothing is irrelevant, there are never occasions when things get dull or uninteresting; dreams are all action, action, action, and the piano part certainly echoed that. Furthermore, the piano’s material, which seemed compelled to move from idea to idea with alacrity, occasionally throwing up references to stylistic idioms when the mood seemed to warrant it, communicates something of the stream of consciousness from which dreams are formed. But that can’t change the fact that, as time went on, the piano seemed to become increasingly intrusive; an apparent interconnection between the piano and singers was—to me, anyway—lacking, resulting in an æsthetic friction that surely wasn’t what Benjamin intended. The one advantage of this was that it enabled (forced) one to focus entirely on the singers, and a highly effective trio they were too. All three clearly relished their rôles; Jonathan Ainscough was splendidly henpecked as Louis, while Emma Hall and Laura Sheerin as the sisters Antoinette and Marie took to their parts with a deliciously wicked sense of glee.

Francis Poulenc‘s La Voix Humaine, in the second half, made for a heavy-weight contrast. And contrast is the word; the accompaniment to the solo voice is here one in which space and a sense of dialogue are paramount. While i don’t know Poulenc’s orchestral original, i can’t imagine it sounding anywhere near as intimate as the solo piano version we were given. The soprano spends the entire time on the phone, and Jamie Thompson’s superb delivery on the piano was highly suggestive of the unseen person on the other end of the line. Composed just over 60 years ago, Poulenc’s work is extremely fresh, its story—of the final conversation between two long-term lovers—timeless. In no small part, it’s the slow, gradual way in which we learn the facts of their relationship that makes the piece as brilliant as it is, moving from initial elation and cheerfulness to disagreements and mentions of suicide. The occasional interruptions due to the bad connection—hilarious at first—only add to the discomfort, eventually becoming torturous knife-wounds into an already agonising situation. Poulenc’s writing is masterly; throughout, the soprano is obviously dying to sing, but is reduced to phrases that halter and end up entirely fragmented; her moments of successful lyricism are rare, and become all the more painfully poignant as a result.

The success or failure of La Voix Humaine rests almost entirely on the shoulders of the solo soprano, and Rebecca Lea (who also directed both operas) gave what i can only describe as one of the finest performances i’ve ever witnessed on stage. Hers was no mere act; she had fully become the character of Elle, and i found myself completely drawn into her claustrophobic world. It’s a horrid place, one where hope is all but gone, Elle desperately keen to keep the conversation going as long as possible, hanging on the man’s every word, panicking at the slightest hint that he may find something she says remotely disagreeable. The stage design was highly effective in this regard; the telephone cord, represented by a lengthy piece of red fabric, was redolent of either a vein or blood vessel, emphasising the point that this vital conversation had become her lifeline, a delicate strand only just keeping her alive, at times lovingly caressed, at others, ominously working its way around her neck. At the work’s culmination, the conversation—and with it, everything else—brought to an end, i couldn’t help but share Lea’s devastation and tears; it was a simply astounding performance.

La voix humaine is conceptually amazing, the way he extends song into theater. It's a tour de force. Watch the DVD with Carole Farley extremely atmospheric filming of the orchestral version. This is the classic !