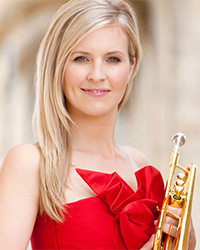 James MacMillan‘s most recent composition, Seraph, a concertino for trumpet and strings, was premièred by Alison Balsom and the Scottish Ensemble a little over a month ago, at the Wigmore Hall in London.

Its bold, militaristic start immediately puts Shostakovich in mind, but this is supplemented with an obvious reference to Joseph Haydn. MacMillan takes the last movement of Haydn’s concerto as his own starting point, using a misquote of its opening phrase as a gesture upon which much of his first movement is centered. While the tone remains boistrous throughout, there are two softer episodes, welcome asides in what is otherwise a surprisingly workaday brand of music that, on more than a few occasions, crosses the line into pastiche. The Haydn quotation isn’t the only Classical affiliation; the presence of three movements—fast-slow-fast—is an obvious connection, and even clearer is the structure of this opening Allegro, replete with recapitulation.

The central Adagio emerges from silence, glistening muted string tremolandi leading to a highly lyrical duet between the trumpet and a solo violin. Despite the distance of the violin from the remaining strings—meandering at a stratospheric height above them for much of the time—they’re fundamentally connected; it’s the trumpet in between that’s at odds with things, preoccupied with ideas in a harmonic plane that occasionally fits with the strings, as if by accident. A static episode loosens the tonality all round, and the strings subside, leaving the two solo instruments alone; the relationship between them is more ambiguous than ever, the trumpet’s somewhat aimless material seemingly disconnected from the emotive fragments emanating from the violin.

‘Marcato e ritmico’ is the indication for the finale, MacMillan exploring “a closely worked canonic idea, which first appears on low strings, giving a somewhat ‘ungainly’ sensation at the outset” (from the programme note). The trumpet enters, playing a cross between a brisk chorale and fanfare motifs, before taking on the “ungainly” melody, detached and highly angular. DSCH and Haydn may have faded as audible influences, but now Tippett enters the frame, the constant scurrying and off-beat accents immediately bringing him to mind, as well as in the drawn out melody that later appears, the rapid pulse continuing beneath. Abruptly, the mood changes completely with the strings reverting to more tremolandi, the trumpet now developing a broad, intense melody marked ‘cantabile e sonore’. Having dropped out, the strings now kick-start the pace again, this movement also featuring a clear recapitulation, at the end of which a weirdly unrelated coda is crudely bolted on, the strings switching to a galloping rhythm while the trumpet trills inscrutably.

There’s no doubt the playing here is magnificent; Balsom, in particular, negotiates the twists and turns of her part with real aplomb and energy, maintaining the hectic speeds with only occasional breathless moments. But is it all worth it? Large chunks of Seraph could have been written 50 (DSCH), even 70 (Tippett) years ago, with little to suggest anything remotely contemporary is going on. At its best, in the slow movement, at the work’s core, there is a thoughtfulness and a beauty that might, if allowed, have almost proved redemptive for the piece as a whole. It’s a shame that the brevity of that movement, coupled with its often strangely purposeless material, prevent it becoming anything special, even going so far as to make its apparent beauty seem suspect. The title is an irritating red herring; MacMillan concedes in the preamble that the title came after, and its sacred connotations hold precisely no connection to what he does in the piece. Whatever you may think of MacMillan’s usual quasi-sacred fare, he’s undoubtedly at his best when big, lofty considerations are inspiring the material; left to his own, more abstract, devices, originality and even imagination prove much harder to find.

Thanks for that Anonymous! Best wishes back to you from the UK!

This blog is one of the best for us who can not listen to BBC in good quality! Thanks for the Proms-postings! Regards from Norway!