Given that so few composers seem to show any real interest in the organ these days, the prospect of a new work for the instrument at this year’s Proms—of 35 minutes’ duration, no less—was a mouth-watering one. Splendidly, the honour was given to Judith Bingham, a composer who, compared to some, seems ever to be lauded in somewhat muted tones, yet in my experience, never seems to put a foot wrong in her diverse output. Her oeuvre flits in and out of direct religious statement, but even pieces with a more secular emphasis usually allude to things spiritual. Her new work for organist Stephen Farr, The Everlasting Crown, is just such a piece, exploring the perhaps unlikely subject of precious stones associated with powerful historical figures, stones that, “undecaying, constant – represent aspects of monarchy and power” (from Bingham’s programme note).

The work falls into seven movements, the first of which, ‘The Crown’, is not assigned to a specific stone, and so serves to establish the tone of the cycle to follow. It originates in a heavy recitative in the pedals, gradually taken up and radiated out on the manuals, through some deliciously rich chords. The music feels like a series of large-scale exhalations, each complemented by a short pause, akin to an intake of breath. Grand and stately, like a processional, the music later becomes more tuneful, before collapsing in a clash of repeated-chord motifs, firmly fixed into the ground by an immense cadence. 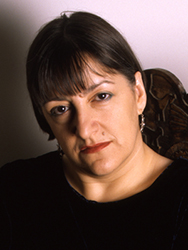 The first stone to be explored is ‘Atahualpa’s Emerald’, which “stolen by Pizarro, represents the divinity of the god-king”. Set in irregular metre, this creates a strong sense of movement, not quite dance-like, but it certainly has its spritely moments. Soft at first, assorted bits of melody can be heard in the middle-distance, then abruptly moving into the foreground. Not for long, though; Bingham keeps the material light, even when it affects a more brooding demeanour later on. Playful but not ostentatious, it comes to an abrupt, unexpected, end—but then, so did poor Atahualpa…. ‘The Pearl Called La Pelegrina’ is a great demonstration of the organ’s quiet potential, bringing about a complete change of mood. It reflects Bingham’s description of the pearl’s owner, “Marie Louise d’Orléans, wife of Charles II of Spain, a queen kept in cruel seclusion, and so [the pearl] represents the loneliness and vulnerability of royalty”. Distant, searching melodies overlap each other, always moving but not seeming to get anywhere. Despite being focused and at times rather intense, the music is a little exclusive; one doesn’t feel drawn into the “cruel seclusion” but kept appropriately apart from it, like a spectator. There’s a wonderful moment towards the end when an unsettling downward sequence of trills is answered by a series of chords forced to wobble by the tremulant. They ultimately unravel in a single line, spiralling downward into nothing.

Whereupon, without a break, ‘The Orlov Diamond’ begins, a sudden, loud affirmation rising from the pedals. This stone, “stolen from a temple in India, was given to Catherine the Great by Count Orlov and represents over-weaning ambition”. The opening music suggests something fugal, but pursues a different direction, accumulating ever bigger chords. The bass melody begins again, the manuals this time offering more ephemeral material, which quickly peters out into a strangely elliptical melody decorated by quirky trills. Relentlessly, the pedals strike out again—only this time to be silenced by a pair of rude chords. “The huge Chinese spinel in the Russian Imperial crown gave the last tsar a literal and symbolic headache”; such is the inspiration for ‘The Russian Spinel’, characterised by dance-like figurations. Precoccupied by odd, irregular pirouhettes, this idea, after a strong opening, is explored increasingly quietly; it momentarily rushes forward again, but closes in dense, wistful fashion, the tsar’s headache made real in the shuddering throb of the pedals.

“King Edward’s sapphire has been in the English crown for a thousand years and was reputedly given to the Confessor by St John: it represents piety”. When turning to English inspiration, Bingham adopts the triple metre of so many of this scepter’d isle’s folk tunes, and even the kind of simple, flute-based registration familiar in any country church. It gradually takes on a more elusive quality, the melodic line broken up and surrounded in material one moment florid, the next sporadic and strange. More weird trills ensue, surrounding a rather brusque, harmonically obtuse episode; the music appears to return to its roots, heavy and turgid, before ascending into the highest regions of the instrument, obsessed by repeated chords.

The seventh and final movement actually draws on a pair of stones, “the Timur Ruby and the cursed Koh-i-Noor, [which] have always been kept together; they represent conquest and spectacle”. It begins in profound, obfuscated depths, a subterranean melody that, at times, is not so much heard as felt. As a higher melody joins in, the pedals seem by turns to pulse and snarl (all credit to the engineers for ensuring such difficult audio as this is so clearly defined in the broadcast); this leads to an angry episode that can’t seem to tell if it’s in simple or triple time. The manuals begin to take over, stodgy but mobile, hammering out chords earnestly, but nonetheless rather characterless (the connection to silent movies, mentioned in the programme note, here suggests the need for something visual). Cascading scales break out at times, punctuated by the music blowing off increasing amounts of steam, until everything coalesces into a vast closing chord.

Despite the variety of ideas at work in The Everlasting Crown, there’s a strong sense of interconnectedness between the movements, and Bingham has no doubt added a fascinating new work to the repertoire, a thoughtful work that happily avoids the cheap kind of histrionics one hears too often in contemporary organ music. Stephen Farr’s rendition of it on this first public outing is superb.