Monday evening’s Prom brought one of the pieces i’ve most been looking forward to hear in this year’s season, the first London performance of Cold Heat by Swedish composer Anders Hillborg. Few composers in recent times have revivified the Straussian idea of the symphonic poem more effectively than Hillborg, although his approach avoids overtly programmatic ideas. Hillborg prefers more abstract but no less evocative subject matter, and this train of compositional thought is continued through the fifteen minutes of Cold Heat, which was performed by one of the groups who commissioned the work, the Tonhalle Orchestra Zurich, directed by David Zinman. 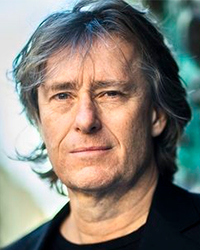 In truth, it’s much more than a mere preference; Hillborg positively deliciates within the hypothetical sonic environments he creates, conjuring this one into existence via a series of vigorous woodwind flourishes. Immediately, they’re countered by a largely static, drawn-out horn line, which is passed to the strings who succeed in slowing down the winds until they resemble a large collection of bird calls (the programme note cites King Eiders as inspiration). A sudden loud bass pedal from piano and lower strings changes the mood like a jump cut, topped by descending oboes; while the strings predominate, brass surges start to appear, growing in forcefulness and eventually triggering a loud solitary percussion accent. It’s archetypal Hillborg territory, broad and apparently slow overall movement, but crammed with a seething mass of activity. and then it bursts: an eruption of forward motion pushed along by the strings, dominated by them at first; after a couple of minutes the brass and winds get involved, and at the entrance of loud wooden percussion, the atmosphere turns almost violently ritualistic. Hillborg revels in the melée for a bit before abruptly cancelling out most of the orchestra, leaving just the woodwind with any real movement, before the deep pedal heard earlier returns, soon followed by the brass surges, the music’s surface now glistened by the strings, who slowly move into the foreground. From the middle-distance, vast, imposing chords are carved out by the brass, crowned with a single tubular bell strike (throughout, Hillborg’s use of percussion is impressively restrained). Over an extended period, the texture gradually ebbs and fades, exposing a solo cello, whose cantabile melody, dusted with far off, tinkling bells, forms the epilogue of the work, joined by a high violin at its close.

It may seem an inappropriate association, but i always find myself thinking of Takemitsu when listening to Hillborg’s music, perhaps due to the innate sense of inevitability with which Hillborg imbues his music. The Tonhalle Orchestra’s rendition of the work is superb, teasing out even the tiniest threads in Hillborg’s often dense textures.

Thanks a lot lescamil – i'll check out the CD.

You can find it on an Ondine disk that also has his violin concerto and Liquid Marble, with Salonen conducting. Great disk, highly recommended.

@ lescamil – i actually haven't heard 'Peacock Tales' yet, i'll have to keep my eyes open for a performance…

I was also looking forward to this one. I know Hillborg from his (relatively) famous clarinet concerto 'Peacock Tales'. Once again, well done!

[…] But it’s the odd one out on a disc that is otherwise nothing but a delight. Beast Sampler and Cold Heat—both works featured before on 5:4 following their appearances at the Proms—sound better than […]