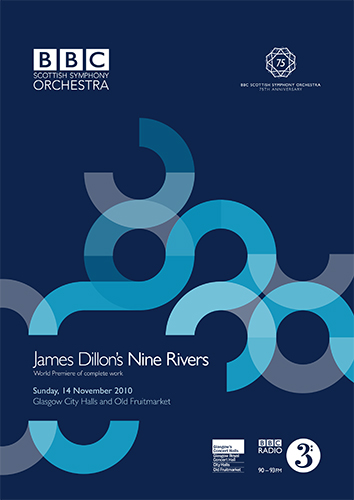 Having kept the electronics on a very tight leash in L’œuvre au noir, James Dillon reins them in almost completely in the seventh work of the Nine Rivers cycle, éileadh sguaibe. Like its predecessor, the work was also commissioned for the Paragon Ensemble, who gave the first performance in January 1991. The title, in Scots Gaelic, approximates to “gathered up in pleated folds”, referencing the kilt and serving as a descriptor for Dillon’s manipulation of material, which he has described as “folding sound”. The electronics, as i’ve said, are negligible, so the piece is simply heard as one for brass septet and percussion. Despite éileadh sguaibe‘s brief duration (about which more later), Dillon establishes a fascinating relationship between these two groups, which in many ways feels like a continuation from L’œuvre au noir (and almost sounds like a larger incarnation of Richard Barrett’s superb piece for trombone and percussion, EARTH); in part, it’s inspired by this stanza from Rimbaud’s La Bateau ivre:

I, who trembled, hearing at fifty leagues off
The moaning of the Behemoths in heat and the thick Maelstroms,
I, eternal spinner of the blue immobility,
Miss Europe with its ancient parapets!
(translation by Wallace Fowlie)

In short, the percussion dominates, despite an aspirational opening chord from the brass, building to a huge fortissimo. It’s quickly forgotten in an episode of initially subdued drum patterns (2:3:5), gently accented by the tam-tam, like a sombre introduction to an arcane rite. When the brass finally enter, their constricted figurations are unable to break through the web created by the drums, and they’re quickly overwhelmed. A second attempt proves more long-lasting, but the material—muted, constrantly trilling—is insubstantial, and a percussive shift to emphatic snare crescendi renders them even more small and impotent. In a move that sounds almost conciliatory (opting for pitched instruments, handled gently), the percussion finally yield to the brass, which having spent the first few minutes in the middle distance, finally become foregrounded. The mutes remain, but the manners are far more demonstrative, clearly in search of a distinct melodic voice; increasingly threatened by loud drum punctuations, their material has a nascent quality, audibly impatient in its intent to evolve. At a cue from the mark tree, Dillon separates the forces, allowing the brass a chance finally to speak softly, without having to force their way through. While the percussion lurk in the distance, the brass steadily grow in stature, culminating in a stark series of dyads and an optimistic but rather haphazard surge. Yet for all the bolstered assertion, dry woodblock tremolandi—practically dancing around the brass—swiftly reduce them to an anæmic, lumbering shadow; they remain only as a remarkable heavily-muted duet, practically quacking at each other while the last shards of percussion are captured by the electronics, a sustained reverb hovering ominously over some far off, final questions from the trumpets.

Theoretically lasting 12 minutes, éileadh sguaibe is not the shortest work in Nine Rivers (that should be L’ECRAN parfum, with a listed duration of 10′); however, in the first performance of the complete cycle, it clocked in at barely nine minutes, so either in practice it really is the shortest in the cycle, or Steven Schick was taking the piece somewhat faster than intended. Either way, the drama Dillon creates in such a small durational space is seriously impressive – the brevity perhaps heightens the dramatic sense – and the brass players of the BBC Scottish Symphony Orchestra are clearly relishing the strictures imposed by the percussionists.