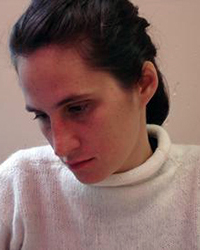 The next piece in my ongoing Lent series is an unusual setting of the Lord’s Prayer by the Argentine composer Julieta Szewach, which was broadcast on Radio 3 in 2008. Dikyrion uses the Aramaic version of the text, in a setting for mezzo-soprano and tape. The work was one of two selected as “outstanding” in the 11th International Rostrum of Electroacoustic Music, which took place in 2007 in Portugal (more info here). It’s easy to see why they came to that conclusion; Szewach’s piece is not only markedly different in tenor and temperament from the majority of electroacoustic music one tends to hear these days, but the soundworld she creates is both deeply immersive and very beautiful indeed. The word ‘dikyrion’ refers to a 2-branched candlestick used in Orthodox Christianity, that represents the dual nature of Jesus, both divine and mortal.

The atmosphere Szewach creates is a profound one, ethereal and mysterious. She abstracts the text, stretching and aerating it, turning it into mere shadows of words at the start, mere whispers of them towards the end; enclosing them at both points are low, solemn notes that toll out like deep gongs. The mezzo-soprano voice—difficult to distinguish from the voices heard on the tape—gradually coalesces above these shifting rumbles, whereupon the piece launches into an abrupt, overwhelmingly rich and radiant episode, in which multi-layered voices soar and throb, their tone imploring. It quietens as swiftly as it began, though, passing through a network of rushing winds to return once again to whispers. The remaining sung passage is something of a stylistic recapitulation, lines overlapping each other, briefly assertive but growing ever more distant, before subsiding completely.

[…] Conlon Nancarrow) and some brand new favorites. I am over the moon for Julieta Szewach’s Dikyrion and Unsuk Chin’s violin concerto (Total Immersion). Really terrific […]

My head might think that emotionally the piece goes for some rather easy targets but in my heart I felt this was a very moving piece. Many thanks for sharing it. She is certainly a new composer to me – I will have to look out for more material from this composer.

Ian, i know what you mean; there’s something familiar about the language, but the emotional reach is surprising. Impressive piece, but sadly there’s pretty much no information about Szewach anywhere on the web.

Hello, I wanted to comment that Juliet is my professor at the University of February 3rd, here’s something he wrote it on the web, has a couple of links if you are interested:

¨ Hi, I’m Juliet Szewach, songwriter and coordinator of the Master of Musical Creation, New Technologies and Traditional Arts, National University of Tres de Febrero:
http://www.untref.edu.ar/posgrados/posgrados_16.htm
The teacher Alejandro Iglesias Rossi, director of the same and the Bachelor of Music, is also director of the Institute of Ethnomusicology and Creation in Vanguard Arts and Dr. Isabel Aretz (IDECREA) http://www.untref.edu .ar / institutes / institutos_idecrea.htm
and the Orchestra of Indigenous Instruments and New Technologies of the University (video on YouTube):

I send the link in the Wikipedia:
http://es.wikipedia.org/wiki/Alejandro_Iglesias_Rossi
Thanks and greetings to all
Juliet Szewac ¨