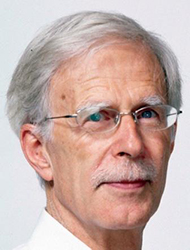 As Lent moves into Holy Week, a hymn regularly sung is “The Royal Banners Forward Go”, composed as far back as 569 by the then bishop of Poitiers, Venantius Fortunatus. The text commemorates the crucifixion, opening in strikingly vivid fashion:

It’s not a text that seems to have appealed to many composers down the ages, a notable exception being Franz Liszt, whose Via Crucis (discussed briefly in 2009) opens with a fortissimo rendition of this hymn. Much more recently, in 2003 Jonathan Harvey composed a new setting using the English translation by J. M. Neale.

Despite lasting barely four minutes, Harvey creates an atmosphere both intense and mysterious, the men and women answering each other in stately rising fifths. Only gradually do they move out of reverential shadow, drawn out by the descriptive references to Christ on the cross; the forced tutti Harvey creates captures well the ambivalence of Holy Week, its ultimate tone of celebration violently militated against by the preceding downward spiral into suffering and death. Mention of the “purple of a Saviour’s blood” mutes the voices, sending all but a solo soprano back to their opening words; the soloist’s epilogue, delivered in a high register, has a fragile, wavering quality to it, emphasising at the last the underlying sense of tragedy. (Interestingly, Harvey omits the closing verse—To thee, eternal Three in One,/Let homage meet by all be done:/As by the cross thou dost restore,/So rule and guide us evermore.—perhaps due to it being doxological and as such not part of the text’s main narrative.)

This performance by the BBC Singers, directed by David Hill (who also directed its première in 2004), took place at the Barbican’s Total Immersion festival devoted to Harvey in January.

There whilst he hung, his sacred side
By soldier’s spear was opened wide,
To cleanse us in the precious flood
Of water mingled with his blood.

Fulfilled is now what David told
In true prophetic song of old,
How God the heathen’s King should be;
For God is reigning from the tree.

O tree of glory, tree most fair,
Ordained those holy limbs to bear,
How bright in purple robe it stood,
The purple of a Saviour’s blood!

Upon its arms, like balance true,
He weighed the price for sinners due,
The price which none but he could pay,
And spoiled the spoiler of his prey.